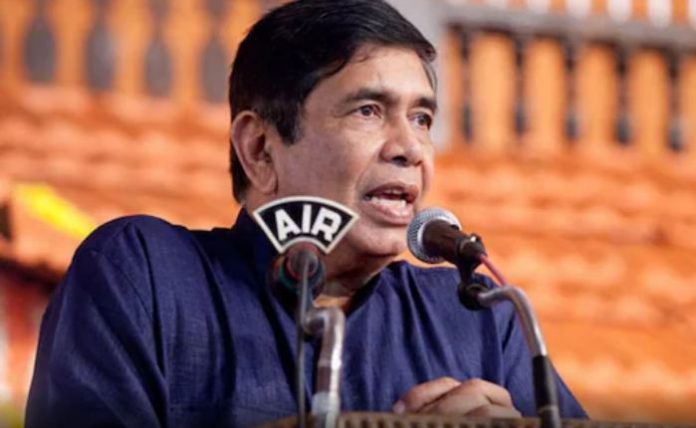 Congress veteran Oscar Fernandes, who was hospitalised after he suffered a head injury in July this year, died on Monday at a private hospital in Mangaluru.

Farnandes’ last rites are likely to take place in his home district of Udupi on Tuesday.

Former Union Minister and Rajya Sabha member Oscar Fernandes is survived by his wife Blossom Fernandes and two children. He was 80.

Congress legislative party leader in Karnataka Assembly Siddaramaiah tweeted that he is shocked by the demise of senior Congress leader Oscar Fernandes.

Senior Congress leader M Veerappa Moily extended his condolences to the family, stating that he had lost a personal friend, the nation has lost a great leader and the party has lost a devoted leader.

K C Venugopal, the Congress General Secretary tweeted that extremely saddened by the demise of Congress stalwart Oscar Fernandes. An irreplaceable mentor and hardworking organisational leader, Fernandes contributed immensely towards the betterment of the nation and the party.

Earlier in July, doctors in Mangaluru had successfully conducted an operation to remove a clot in his brain. Doctors were treating him in the intensive care unit of the hospital.

Fernandes had served as the Union Minister for Transport, Road and Highways and Labour and Employment during the UPA-I. He also served as Parliamentary Secretary to Rajiv Gandhi.

Fernandes was elected to the 7th Lok Sabha in 1980 from Udupi constituency in Karnataka and was nominated to the Rajya Sabha by Congress after he lost the 1999 Lok Sabha elections.

Apart from political activities, he also founded the ‘Jolly Club’ NGO where he had arranged a library room facility for youths to cultivate their reading habits.

Son of a school teacher, Fernandes, who was the KPCC president for two terms, was also a trained performer of traditional dance forms Kuchipudi and Yakshagana. He was also the chairman of the Central Election Authority of the All India Congress Committee (AICC).