Home Special tv shows Mudda (debate show) “Pak should look at its worsening economy, and not at Kashmir” 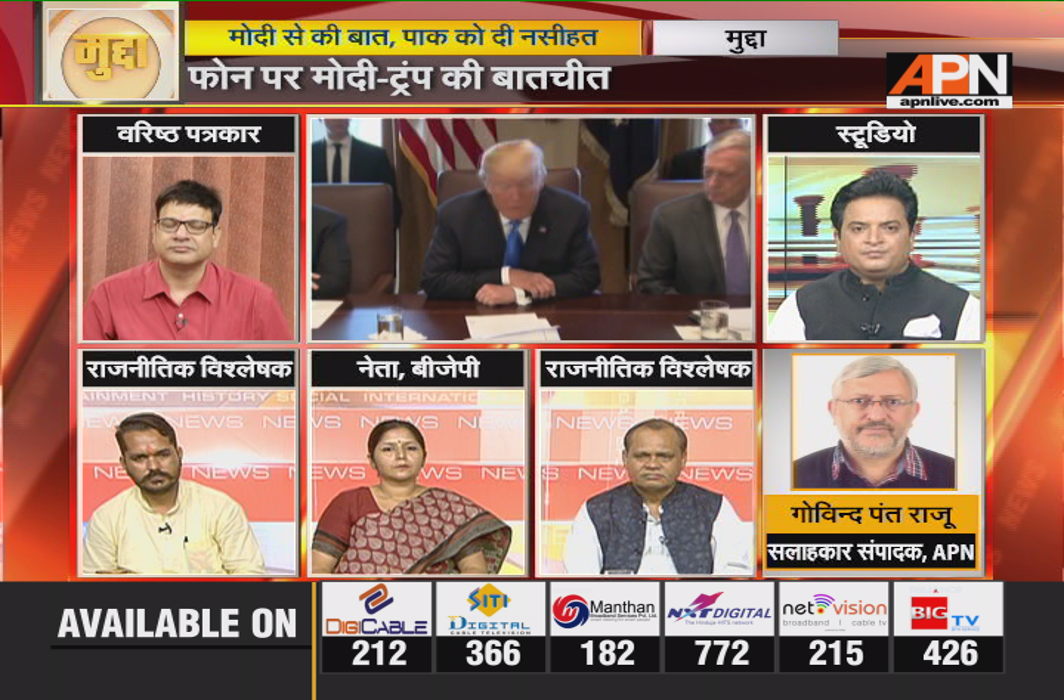 Kaushik said: “How many militants are there in the Valley–this needs to be found out. Pakistan is not going to be let off on the militancy issue.”

Pandey said: “When two top leaders talk, it will have an effect on the relations between both the countries. Anti-peace elements have got a warning. This government has internal clarity on this issue.”

Gupta said: “America is a big super power. Trump spoke to Modi for half-an-hour. America is also dealing with terrorism, the entire world is dealing with it. Pakistan is harbouring such addas. But nations also look at their own self-interest. America needs to watch out for China’s growing clout.”

Raju said: “PM must have expressed India’s interest. India has been making its stand clear. America has tried to intervene, but Modi has been adamant that no interference is needed on the Kashmir issue. US wants its troops out from Afghanistan. It has been apparent that Pakistan is getting desperate, and is under pressure.”
Bhatti said: “Pakistan PM Imran Khan and the earlier Pak PMs have always been desperate. Pakistan has been backing militant groups. Now its economy is weakening, and therefore Khan is getting even more pushed to the wall.”

Kaushik said: “Pakistan seems to have no other hot issue except Kashmir. Srinagar has more than 500 schools and security has been beefed up all-around.”

Pandey said: “Over 196 schools have opened in Kashmir, though attendance is low. Still, the government has been taking steps. Valley has always been volatile, but small steps are being taken now after such a decisive move like that of scrapping of Art 370.”

Gupta said: “Modi has tried to put pressure on Pakistan to back off. China is supportive of Pakistan, since there are economic concerns as well.”

Bhatti said: “By removing Art 370, it is not that the BJP alone has to gain from it; the entire nation will gain from that.”

Kaushik said:”People wanted Art 370 to be scrapped. BJP got a huge mandate, and it did what it had promised to do. Stone-pelters were allowed to be propped up due to petty political reasons. Imran is getting worried about PoK. The army in Pak is putting pressure on the PM. In Pakistan, ISI and the army dictate what the political line should be, the entire world knows that. Everyone knows the birthplace of ISI. Imran Khan has made no policy announcements to boost the economy.”

Bhatti said: “Pakistan would do well to focus on its economy and development, and should move ahead with balance.”

Gupta said: “PoK is also an important part of Kashmir.”