Home Latest world news If Pakistan is a ‘naya Pakistan’ it should show this in ‘naya... 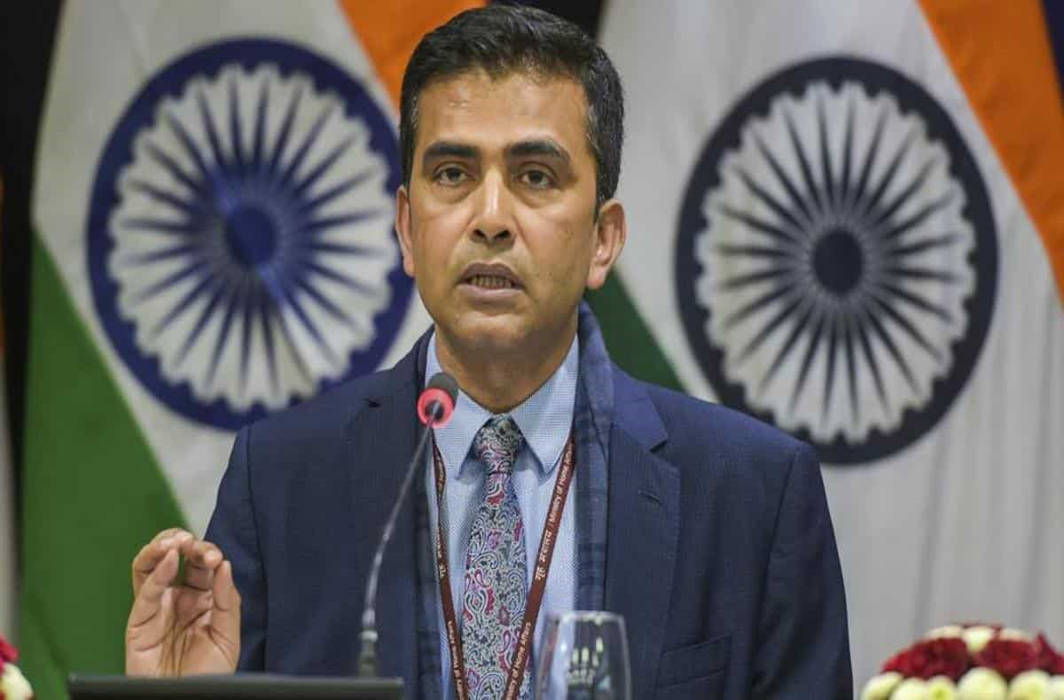 If Pakistan claims to be a ‘naya Pakistan’ with ‘nayi soch‘, it should demonstrate ‘naya action‘ against terrorism, said Ministry of External Affairs spokesperson Raveesh Kumar today (Saturday, March 9).

Speaking at a media briefing, Kumar said that Pakistan has not shown any serious intent to address legitimate concerns of India and the international community.

“If Pakistan claims to be naya Pak with nayi soch, it should demonstration naya action against terrorist groups and terror infrastructure on its soil and end cross-border terrorism,” he said.

Kumar said, “It is regrettable that Pakistan still continues to deny Jaish-e-Mohammed’s claim of taking ownership of Pulwama attack. Pakistan Foreign Minister said they (JeM) have not claimed responsibility of the attack. Is there some confusion or is Pakistan defending the Jaishe-Mohammed?” He added that widespread terrorist camps in Pakistan is public knowledge.

Referring to a report on Jaish-e-Mohammad (JeM) chief Masood Azhar’s presence in Islamabad, Kumar said, “We are seeing the same script that has been played out earlier, after the terror attack on Parliament in 2001, the Mumbai attack in 2008 and the attack on Pathankot airbase in 2016. Pakistan claims to proscribe groups and individuals, but this is confined only to paper. Terror groups and individuals continue their activities without hindrance.”

He added that Pakistan should explain why it continues to deny that its F-16 fighter aircraft was shot down, adding that it has asked the United States to explain whether the use of F-16 by the country was in according to terms and conditions of the sale.

The MEA spokesperson also said that since the deadly Pulwama attack, which killed 40 CRPF soldiers on February 14, international communities have stood with India in condemning Pakistan and urging the country to take action against terrorists.

Kumar recalled that the US, UK and France have moved a fresh petition in the United Nation Security Council (UNSC) to designate Azhar as a global terrorist. He also said India’s non-military strike on JeM camp in Pakistan’s Balakot achieved its desired objective and demonstrated the country’s firm resolve to take decisive action against cross border terrorism. He also said that an Indian Air Force MiG-21 Bison, piloted by Wing Commander Abhinandan Varthaman, shot down a Pakistan Air Force F-16 fighter aircraft and there were eyewitness accounts and electronic evidence for it.

“Our non-military counter-terrorism strike achieved the desired objective. It has demonstrated our firm resolve to take decisive action against cross border terrorism. We have also shared evidence in the form of parts of AMRAAM missile which were recovered from the site and are only carried by F-16 aircraft of the PAF. Only one aircraft was lost by India during Pakistan’s unsuccessful attempt at targeting Indian military installations,” he said.

Kumar added, “Pakistan is spreading false propaganda. If Pakistan has a video recording of shooting down two aircraft of the Indian Air force, why it has not shared the evidence with the international media?”

On Pakistan using F-16s, he said, “We have asked USA to also examine whether the use of F-16 against India is in accordance with terms and conditions of sale.”

The MEA spokesperson’s statement comes a day after Pakistan Prime Minister Imran Khan said that his government would not allow the country’s soil to be used for terror purposes against any country.

Meanwhile, an influential US Congressman has warned that Pakistan will continue to slide into international isolation if it does not take actions against terrorist groups operating from its soil, reported NDTV.

“The United States’ Congress stands ready to support Pakistan should Prime Minister (Imran) Khan begin cracking down on terrorist groups in earnest. This will only help improve his nation’s economy,” Bera, an Indian-American, wrote in an op-ed published in News India Times on Friday

In his op-ed titled “’Time For Pakistan to Chart a New Course”, the four-time Indian-American Congressman from California said that Pakistan did the right thing by releasing Indian Air Force pilot Abhinandan Varthaman.

“This de-escalated a dangerous situation but more has to be done. Prime Minister Imran Khan should use this opportunity to reset his country’s relationship with the world and chart a new course for Pakistan,” he said.

This starts with cracking down on the JeM and other terrorist groups such as Lashkar-e-Taiba (LeT) which was responsible for the 2008 Mumbai terror attack, Bera said, adding that unfortunately, Pakistan’s behaviour towards these terrorist groups have been contradictory and self-defeating.

“Pakistan has banned many of these terrorist groups, including adding two more groups on March 5, but at the same time tolerates them operating within its own borders. This has caused the international community to isolate Pakistan,” Bera said.

Pakistan says it has taken some initial steps, like detaining 44 suspected terrorists, including the brother of JeM chief Masood Azhar. It is, however, unclear whether this “preventative detention”, as Pakistan described it, will lead to criminal prosecutions and justice being served, he said.

“Prime Minister (Imran) Khan can help Pakistan earn enormous goodwill by tracking down and bringing to justice Masood Azhar, whom the Pakistani Foreign Minister indicated was alive, with his whereabouts known. They can further that goodwill by dismantling the terrorist networks that operate within Pakistan.

“These actions are in accordance with UN Security Council Resolution 1267. If Imran Khan does not take these steps, I’m afraid Pakistan will continue to slide into international isolation, which will only serve to increase economic hardship on the Pakistani people,” the Congressman said.

“I also call on China to play a constructive role in India and Pakistan relations. A good first step would be for China to cease blocking a UN Security Council resolution designating Masood Azhar a global terrorist,” said Bera.