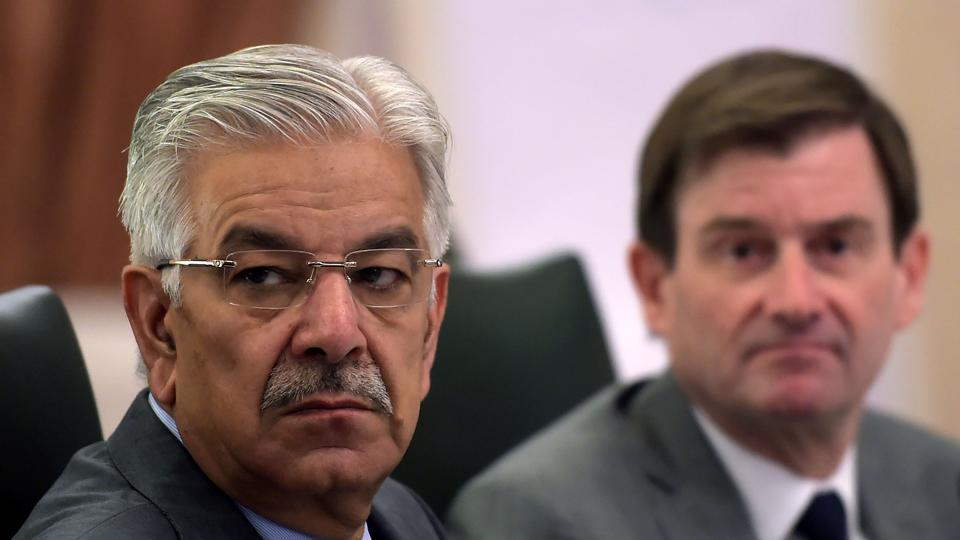 Khwaja Asif claims of “cleared air” in ties with US

Having gone through US pressure for “doing more” to contain terror groups on its soil for few months, Pakistan seemed to be relieved on Monday when its foreign minister Khwaja Asif assured that their security forces have dismantled terrorist network across the country and welcomed US mediation for easing its ties with India.

According to Radio Pakistan Asif was speaking at US-Pakistan Bilateral Dialogue – organised by a think tank in Islamabad. He said that Pakistan has always opted for comprehensive dialogue for a peaceful neighbourhood. Asif shared dais with US Ambassador David Hale after a while on Monday.

The theme for the US-Pakistan Bilateral Dialogue was “Convergence amid divergence: Identifying pathways to cooperation in a challenging environment”.

He said that it was “unfair to blame Pakistan for whatever ails Afghanistan” as Pakistan has “eliminated terrorism from its soil after great sacrifices and now there are no terrorist safe havens here”.

Asif claimed that recent interactions between Pakistan and US has “cleared the air”, and added, “We look forward to confidence building to achieve the goal of peace in the region.”

He claimed that its counter-terrorism efforts have prevented “countless” militant attacks in the US and Europe and said that Pakistan and US have a lot of work to do in fighting negative perceptions.

He assured that Pakistan was is ready to cooperate with other countries to achieve peace and stability in Afghanistan. “The US should share timely intelligence and Pakistan will take action itself,” he added.

While speaking to media persons after the dialogue, Asif described the differences in Pakistan-US relations as “only misperceptions which are being put aside by continued dialogue”.

The News International, published from Karachi, Lahore and Islamabad, reports that US ambassador has revealed that his country had put pressure on India to improve its relations with Pakistan. At the same time he asked Pakistan to show “equal diligence” in fighting all terrorist groups operating in the country, including Haqqani network and cautioned that bilateral relations are at a “crucial juncture.”

The Ambassador discussed US policy about Pakistan and Afghanistan. He said that Trump administration’s recently announced South Asia strategy seeks a secure and stable Afghanistan and looks to Pakistan for decisive action against the terrorists operating on its soil.

The US Ambassador was quoted saying, “We ask for equal diligence in decimating all the groups operating in Pakistan which threaten the region’s stability, including the Haqqani network. We seek a sustained and irreversible effort to achieve an aspiration and commitment that was made public by Pakistani officials themselves, and end to the use of Pakistan soil for attacks on its neighbours.”

The daily further says that US and Afghan officials have alleged that Taliban and its Haqqani allies are directing the insurgency in Afghanistan from sanctuaries on Pakistani soil. The allegations have been at the centre of Islamabad’s tension with Kabul and Washington.

The US ambassador indicated favouring negotiated settlement with Taliban. He reiterated that US are committed to denying the Taliban a military victory in Afghanistan and urged Pakistan to assist in advancing “negotiated settlement” to the conflict.

“Pakistani leaders have made clear that they share our goals for a peaceful and stable Afghanistan. It is now time to join in our efforts and create a context in which terrorist groups can no longer launch cross-border attacks and see no alternative to negotiations,” said the ambassador.

India and Pakistan held no bilateral formal talks since December 2015 despite agreeing to launch Comprehensive Dialogue due to string of terror attacks on military facilities. India blamed Pakistan based Jaish-e-Mohammed (JeM) for the attacks on Indian Air Force base in Pathankot and its army personnel in Uri sector of Jammu and Kashmir.

In April this year, Gopal Baglay, the spokesperson of external affairs ministry had indicated that India’s stand that “disputes with Pakistan must be resolved bilaterally and without third party mediation” remains unchanged.

He was responding to US envoy to UN Nikki Haley’s comments that her country would try and “find its place” in efforts to de-escalate strains between India and Pakistan.