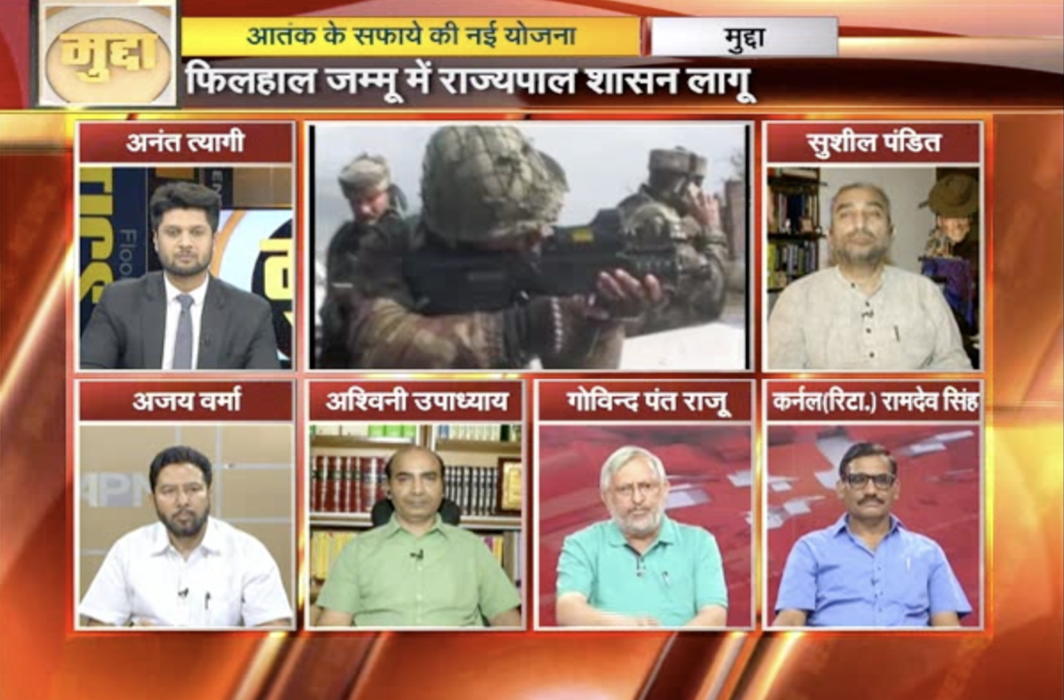 Are politicians truly interested in finding a solution for Kashmiris’ angst and questions, asks Mudda, even as speakers back a hard line against stone-pelters

Operation All-Out has resumed in Kashmir and four terrorists were recently killed in Anantnag district. The Islamic State has entered the Valley. Meanwhile, BJP president Amit Shah is on a two-day tour of Kashmir on the occasion of Sacrifice Day, the birthday of party ideologue and Jan Sangh founder SP Mookerjee. The question that emerges is that is the centre interested in a solution for the problem in the Valley?

Anant Tyagi led Saturday’s edition of Mudda, the APN afternoon debate show, which sought to answer this with senior journalist Govind Pant Raju, retired colonel Ramdev Singh, Susheel pandit, Ashwini Upadhyay from the BJP, Ajay Verma from the Congress. Here is a gist of the ideas that emerged from the parleys.

Stone-pelters are indoctrinated and trained Islamists. They don’t deserve any sympathy. Our party was not in favour of extending amnesty to the stone-pelters, said Upadhyay. He shrugged off responsibility for his party having entered an alliance with the PDP in the first place.

However, Pandit struck a discordant note, saying, “The BJP did not celebrate this day in Jammu for four long years. Now it is doing so for political gains. If asked, it does not have an answer to explain its absence. Let it be, extend their leaders some mercy.”

To this, Upadhyay said, “Only BJP understand the pain of Kashmiri Pandits.”

Col Singh said it is wrong to say the BJP is with the Army. “The Army is not an independent agency, it is always on the side of the government. If there is firing, civilians will die. It cannot be helped. Please find a way to deal with the stone-pelters as they are not innocent children but indoctrinated Islamists and separatists,” he said.

Upadhyay felt that Indian Muslims today are no longer ready to be misled by the Congress’ policy of appeasement. “This is showing in election results. You can’t insult them by thinking they are with the separatists,” he said.

Shah should have suspended his rally and organised a simple function to mark this date, said Pandit. “You released Masarat Alam Bhat. Asiya Andrabi is pleased with your move. You have betrayed Jammu which has given you 25 seats. Now you are hoping to undo the damage with a couple of speeches?” he added.

The party has distanced itself from Saifuddin Soz’s stand on Kashmir freedom. It is his personal opinion, insisted Verma. “Why didn’t you go to Hindu martyrs’ homes?” he asked the BJP spokesperson.

The Hurriyat leaders don’t have the moral courage to ask the separatists to refrain from attacks during the Ramzan ceasefire, Raju felt.