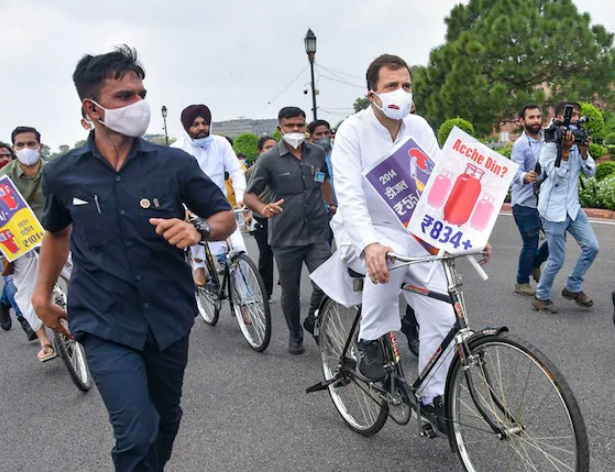 Congress leader Rahul Gandhi’s cycle ride and morning meeting with opposition leaders over Pegasus, Covid and farmers’ protest outside Parliament and the ruckus inside the House over papri chaat disrupted the proceedings on Tuesday.

Nearly a week after his surprise tractor ride to back farmers protest against Cenre’s new farm laws, Gandhi on Tuesday morning rode a cycle to parliament to protest against the issue of fuel price hike. Cycling to Parliament was one of the way to draw the attention of the government to the issue from which the people of India are struggling, he said.

Rahul Gandhi was joined by the leaders of 15 opposition parties while there were at least 10 parties who remained absent. Trinamool Congress’s Mahua Moitra, the NCP’s Supriya Sule, Shiv Sena’s Sanjay Raut, and the DMK’s Kanimozhi were among the leaders attending the breakfast meeting as they united against the government. Although no leader of Aam Aadmi Party (AAP) and Bahujan Samaj Party (BSP) have attended the meeting.

This was the second Opposition meeting since last week to put pressure on the Narendra Modi government to discuss the Pegasus, Covid mismanagement, farmers protest and rise in fuel prices, among other matters

Speaking at the Constitution Club of India in the breakfast meet, the Congress leader said, the single most important thing in his view is to unite this force. The voice of the people unites, the more powerful this voice will become and then the more difficult it’ll become for the BJP-RSS to suppress it.

AAP MP Sanjay Singh, who skipped the breakfast meeting, said that attending or not attending the meeting is not important. Whenever a discussion is held in parliament, the AAP will support opposition’s stand on the farmers protest and the Pegasus issue, he said. Therefore, the Shiv Sena MP Sanjay Raut, who was part of the meeting, stressed the opposition is united to protect issues of national security, democracy and farmers’ welfare.

Hitting out at the Opposition, the BJP accused Congress leader Rahul Gandhi of indulging in gimmicks for cheap publicity and alleged that the opposition has resorted to rant and run tactics to hijack parliamentary proceedings and defame the government.

Since the Parliament convened on July 19, the Opposition has been demanding a discussion and an independent inquiry into the reports that Israeli spyware was used to hack phones of opposition leaders, judges, activists, journalists, and ministers. However, the government has dismissed the demand, saying a statement by Union IT Minister Ashwini Vaishnav in Rajya Sabha was sufficient.

In other India News, Radhey Shyam (priest), Kuldeep, Laxmi Narain and Salim, the accused of raping, murdering and forcibly cremating a nine-year-old girl, have been arrested by the Delhi police and sent to judicial custody.