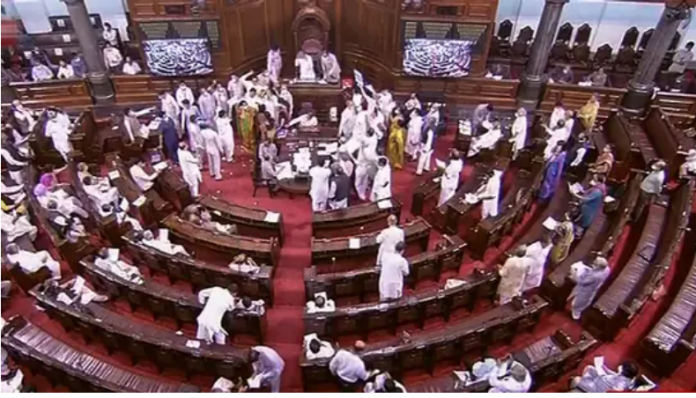 Six Trinamool Congress MP have been suspended from Rajya Sabha for a day on Wednesday after they created ruckus displaying placards while protesting over the Pegasus, which allegedly being used to snoop on opposition leaders, government critics and journalists.

The six MPs – Dola Sen, Nadimul Haque, Arpita Ghosh, Mausam Noor, Shanta Chhetri and Abir Ranjan Biswas were asked to withdraw from the proceedings of the Rajya Sabha for the day under Rule 255, for their grossly disorderly conduct in the House.

Since the beginning of monsoon session of parliament, the Rajya Sabha and the Lok Sabha have witnessed constant disruptions because of the face-offs between the government and the opposition. A similar scenario was witnessed on Wednesday in the Rajya Sabha where the proceedings of the House were adjourned till 2 pm amid the disruption created by the MPs.

Soon after, TMC MP Derek O’Brien tweeted saying that at 2 pm, the Opposition would protest against PM Modi and Amit Shah.

Soon after taking of oath by new member Jawhar Sircar, Naidu said he has not admitted notices given under rule 267 by Ramgopal Yadav and Vishambhar Prasad Nishad of the Samajwadi Party and V Sivadasan of the Communist Party of India (Marxist) over farmers protest against Centre’s three farm laws.

A notice under rule 267 calls for setting aside of the business of the day to take up discussion on the issue being raised. Naidu, however, rejected 267 notices by Sukhendu Sekhar Roy (TMC), Mallikarjun Kharge and K C Venugopal (both Congress), CPI(M)’s Elamaram Kareem and V Sivadasan and Binoy Viswam of the CPI over the Peagus issue.

While in the Lok Sabha, the Trinamool MP Sudip Bandyopadhyay gave adjournment motion notice to discuss the Pegasus issue. Terming Pegasus as a serious issue, the Shiv Sena MP Arvind Sawant said that the Centre is only giving false statements on holding discussions. Earlier before this, Sawant said that if the Centre gives dates for discussion of issues being raised by the Opposition, then they will allow the Parliament to function and maintain decorum in both the Houses.

In other India News, Madhya Pradesh cabinet have approved capital punishment and life imprisonment in the cases related to deaths caused by the consumption of spurious liquor.