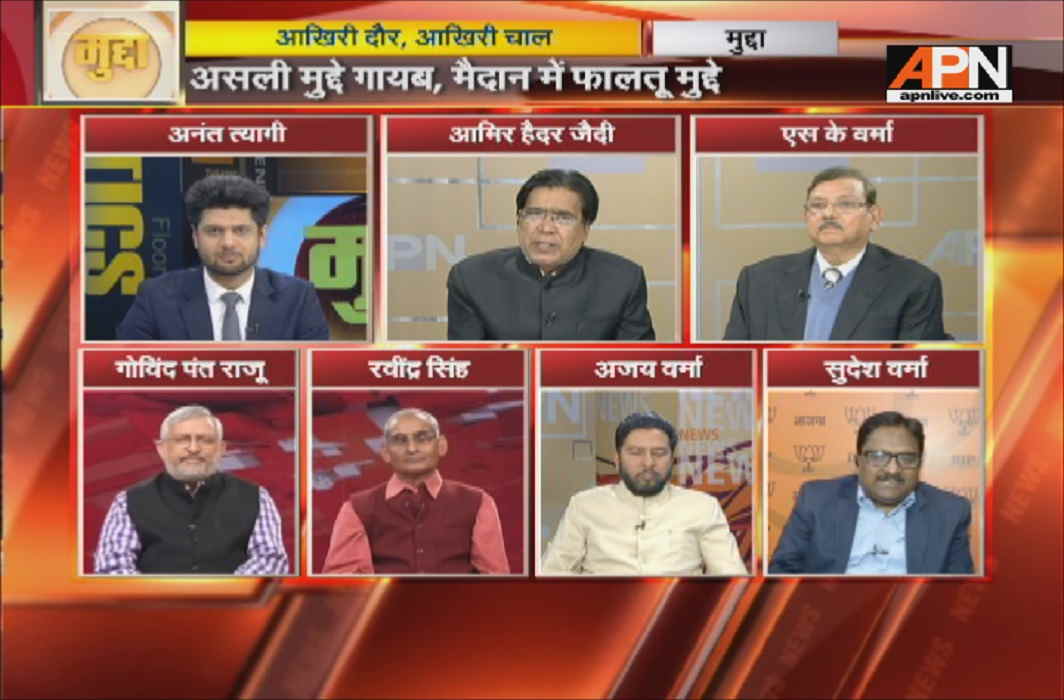 Panellists feel that just to woo voters in Gujarat political leaders have been fanning caste, quota and religious issues and the regressive rhetoric of the 80s and 90s has returned to this era

The Gujarat election is increasingly becoming a prestige battle, and as the date for the second phase of polling nears, political parties are leaving no tricks unexplored to woo voters—be it caste or religion. Taking up the issue at APN’s popular debate Mudda, anchorperson Anant Tyagi asked a few pointed questions to panellists Ajay Verma of the Congress, Amir Haider Zaidi of the CPI, Sudesh Verma of the BJP, political analyst Ravindra Singh, elections expert SK Verma and Govind Pant Raju, APN consultant.

Raju said the battle in Gujarat is surely a prestige issue for both the Congress and the BJP. Sadly, he added, that issues that had been exploited in the 1980s and the 1990s like caste and religion have again been put back on the poll agenda, and development has taken a backseat.

Verma said that the diamond and cloth traders in Gujarat are unhappy with the economic performance of the BJP government and are looking for change. He skirted the question regarding Rahul Gandhi’s new-found interest in visiting temples.

Sudesh Verma said that BJP is the ruling party in Gujarat, and Rahul Gandji is only doing things to please people, which is why he has been visiting temples. “The BJP does not believe in tokenism,” he said.

Zaidi lamented that even Pakistan has been dragged into the Gujarat polls. He said, like Hitler, RSS has the agenda to promote one religion at the cost of others, and people will not allow that to happen.

Singh said that the political debate in Gujarat has plunged to a very low level with senior leaders indulging in mud-slinging.

Commenting on the language used in the political debate in Gujarat, Verma said that parties should look at self-regulating vis-à-vis this issue, as all matters can’t be referred to the election commission. Regarding use of the word, “neech”, he said Mani Shanker Aiyar has explained that he did not fully comprehend its usage in Hindi.

Raju said that such irresponsible statements have been passed by leaders because winning polls is more important than anything else, and the desperation is showing.

Verma said that maintaining decorum is most important and the Congress leader should not have stooped to such a low level.

Singh wanted to know why parties had raked up the Reservation Bill. He said that in Rajasthan, the government promised reservation but the Supreme Court shot it down, so useless promises should not be made to the people.

Verma said that the Congress plans to set up a committee for the purpose of finding out which groups can be put under reservation.