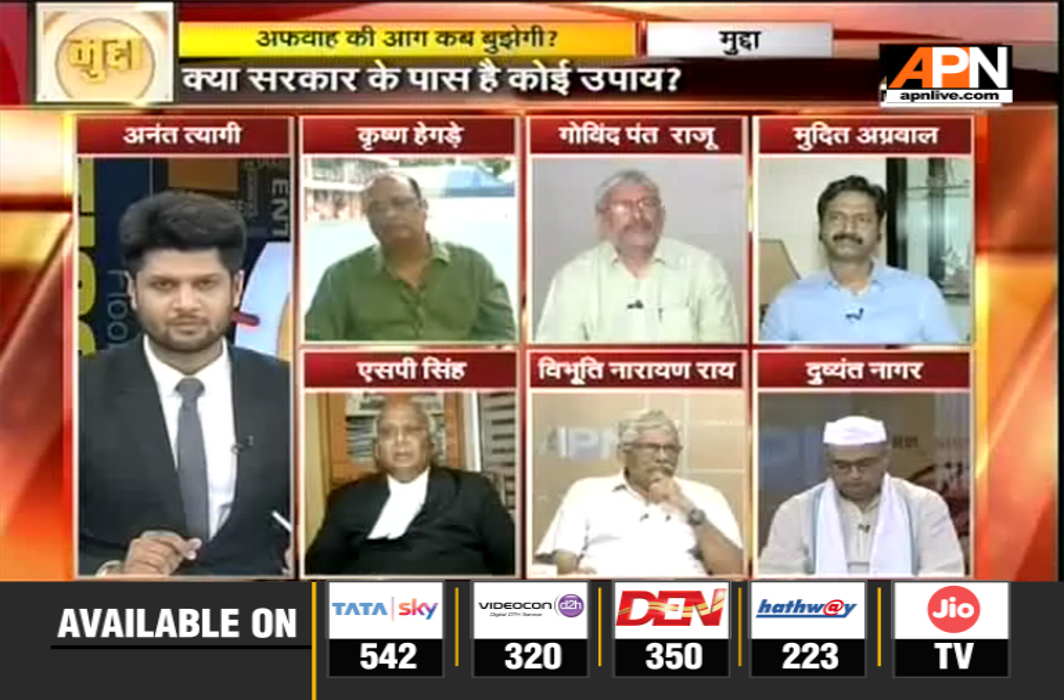 A 32-year-old software engineer was beaten to death and three others—one of them a Qatar national—were seriously injured over WhatsApp-driven rumours of child kidnapping in Karnataka’s Bidar district. In a video that has gone viral, a mob can be seen surrounding the four men and later dragging them out of their overturned vehicle. In recent times, reports of lynching due to rumours on social media have come from various other places. APN’s popular debate Mudda discussed the issue. Anchorperson Anant Tyagi posed questions to panellists including Congress’ Mudit Aggarwal, former IPS officer Vibhuti Narayan Rai, political expert Dushyant Nagar, Supreme Court lawyer SP Singh, BJP’s Krishna Hegde and APN consultant Govind Pant Raju.

Who is responsible for this mess, Anant wanted to know. Raju said: “Social media has become a powerful tool, and vested interests are misusing it. In the latest incident in Bidar, the way the video went viral, it further aggravated the situation.”

Anant said the educated class is responsible for this, to which Raju said: “Tightening of laws is needed to control the menace.”

Hegde said: “There are divisive elements in society that go on the rampage. Whether fake news, cow vigilantism etc, so many problems are now arising out of social media rumours. In lynching cases, a riot kind of situation is created all of a sudden. The government is clamping down on fake news through new laws.”

Aggarwal said: “In 27 killings in nine states in the last one year, the accused have been unemployed poor youth, who feel alienated, and let out their frustration through such violent incidents. Intelligence agencies should be acting faster. In the last 3-4 years, the reigning political culture has given birth to such incidents.”

Anant chided Aggarwal not to have a political agenda in this forum. Aggarwal continued: “Modi has been quiet in many such cases. Jayant Sinha happily joined hands with the lynching-accused. BJP leaders are spreading fake news though their Twitter handles.”

Nagar said: “Such incidents topple the social balance in the country.”

Singh said: “The centre is responsible for checking such incidents of unlawful assembly, and the cases should be treated in the manner of cognisable offence, whether it’s a case concerning cows, child lifters, or lynching due to rumours of child-lifting. These are criminal acts. Subjects of the state cannot be put into any harm.”

Raju said: ”These incidents show a complete breakdown of law and order.”

Rai said: “The 1984 riots were also a case of mob lynching, it seemed the government of the day had no intention to stop such cases.”

Aggarwal kept asking for time to talk and accused Anant for being biased, though Anant said firmly he wants all parties to put across their viewpoints.

Rai said:”All political parties have milked mileage from such incidents of mob violence.”

Aggarwal said: “Why on TV people are scared of taking of BJP? BJP will not allow even anchors to name the party. Poverty plays a huge role in such incidents. Police should be doing its work responsibly. Within two days, then prime minister Rajiv Gandhi had given shoot-to-kill orders in 1984. But PM Modi keeps mum.”

Raju said: “The Congress is alleging our channel, it shows their frustration. Whether UP or Karnataka, law and order is central responsibility. When the videos went viral, police should have acted faster to prevent the death in Bidar. Tough action needs to be taken against all the errant people in such cases.”

Hegde said: “The BJP has already expressed regret. Has the Congress ever owned responsibility like this?”

Nagar said:”Whoever is the ruling party, leaders should give out clear signals that such actions will not be tolerated.”

Singh said:”These are cases of mobocracy. Political parties should refrain from making political interpretation of such cases.”

The counting of ballot papers in the Greater Hyderabad Muncipal Corporation election has begun and the official results have been declared for...
Read more