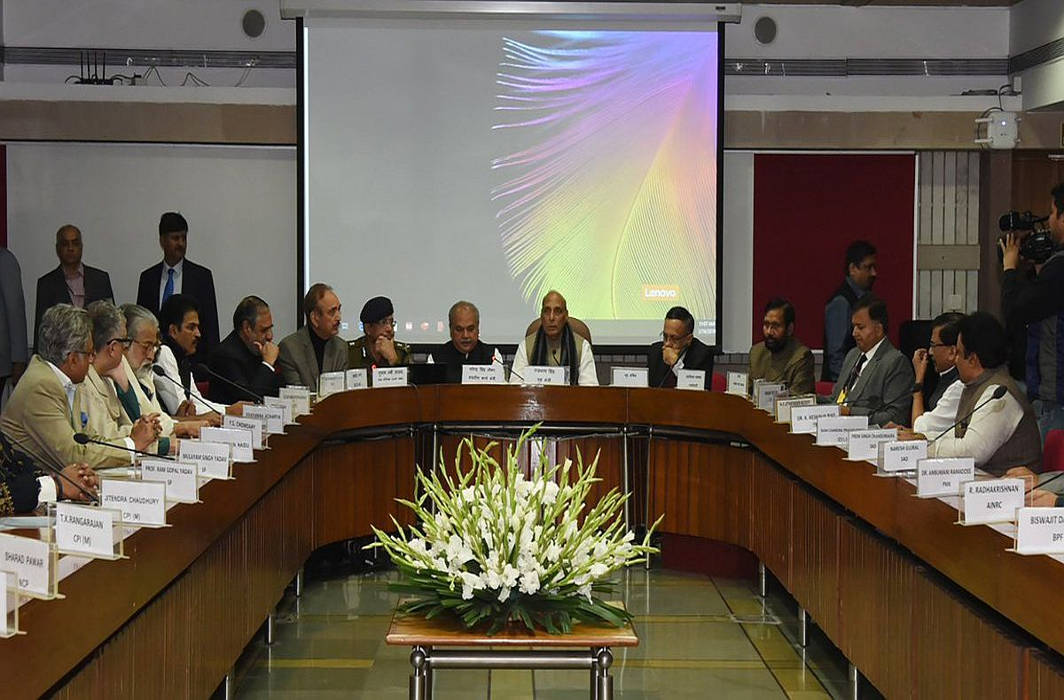 All political parties today (Saturday, Feb 16) joined hands to reiterate their resolve to fight the menace of terrorism.

At a meeting called by the Narendra Modi government over Pulwama terror attack in which 40 personnel of Central reserve Police Force (CRPF) were killed, the parties passed a resolution condemning “terrorism in all forms and the support being given to it from across the border” without naming Pakistan.

The meeting briefed leaders from different political parties about the steps being taken by the government to meet the challenge.

“India has during the past three decades faced the menace of cross border terrorism. Of late, terrorism in India is being actively encouraged by the forces across the border. India has displayed both firmness and resilience in dealing with these challenges. The entire nation speaks in one voice to express its determination to fight these challenges. Today, we stand united in solidarity with our security forces in fighting terrorism and in defending the unity and integrity of India,” the resolution stated. 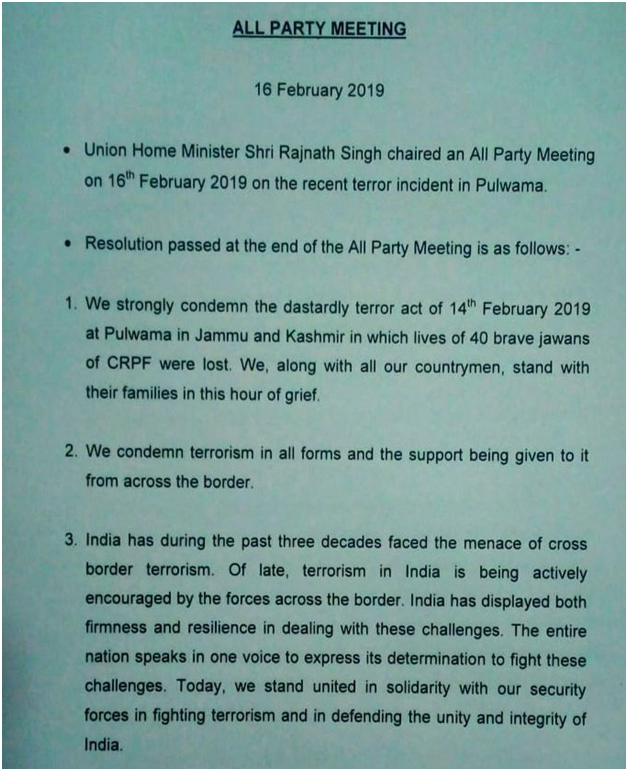 The meeting was chaired by Union Home Minister Rajnath Singh, who visited Kashmir on Friday to take stock of the situation.

The decision to hold an all-party meet was announced by Union Finance Minister Arun Jaitley after he emerged from a meeting of the Cabinet Committee on Security (CCS) on Friday morning. Jaitley announced that the all-party meet would be called soon after Rajnath Singh’s return from Kashmir.

During his visit to Srinagar, Singh held a high-level meeting with the top officials of the Army, CRPF and Jammu and Kashmir Police to assess the security situation in the Valley. The government has vowed to give “befitting reply” to those behind this terror attack.

“We had requested the Home Minister to request the Prime Minister on our behalf to ask Presidents of all national and regional parties for a meeting. This was supported by other parties too. The entire nation is in mourning today, is angry,” the Congress leader added.

Congress president Rahul Gandhi on Friday, describing the incident an “attack on India’s soul”, said that his party and the entire Opposition fully supported the government and security forces “in its action” and that terrorism cannot divide the country.

Prime Minister Narendra Modi, in a warning to Pakistan and the perpetrators of the terror attack on the CRPF jawans, said security forces have been given “full freedom” to choose a “time and place” for the “future course of action”. He promised a “muhtod jawab” (befitting reply) for the attack that claimed the lives of 40 CRPF personnel.

Underlining that the nation’s “blood is boiling”, Modi said the “terror outfits and their masters” have made “a big mistake” and “will have to pay a very heavy price” for their actions.

The government had also reached out to more than 15 influential nations including the P5- the US, the UK, France, Russia and China in an attempt to isolate Pakistan diplomatically.