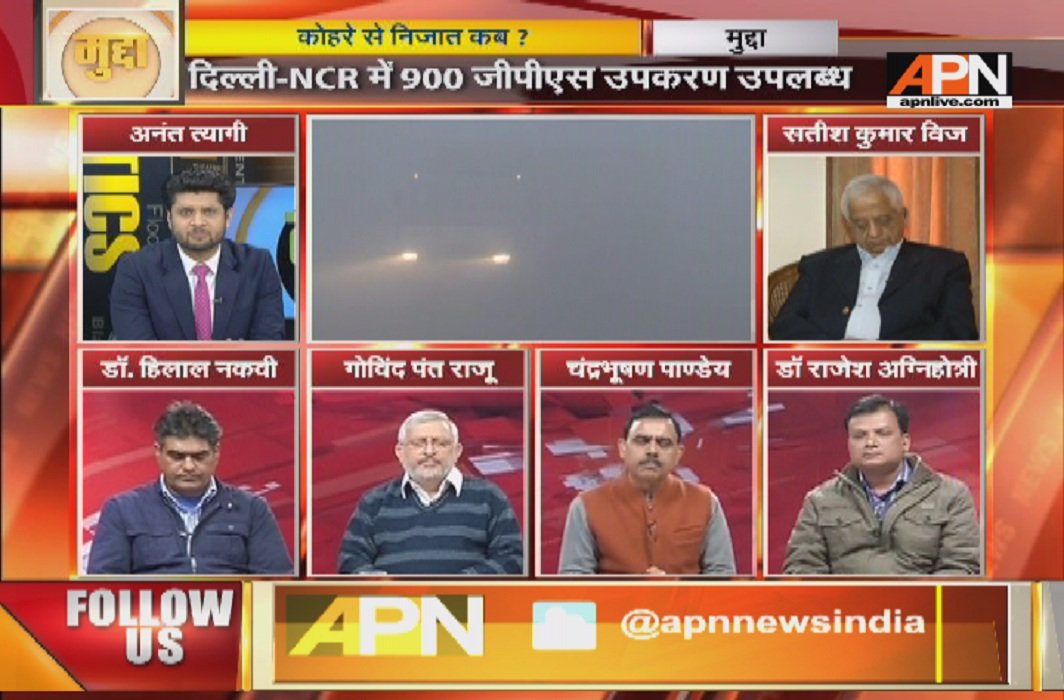 APN’s popular debate Mudda took up the issue of the fog in Delhi and other parts of north India that derailed trains and flights on January 1, 2018. Anchorperson Anant Tyagi posed the questions to panellists Dr Hilal Naqvi of the Congress, UP minister Surendra Khanna, Chandrabhushan Pandey of the BJP, Satish Kumar Wig, ex-member of the railways board, environmentalist Dr Rajesh Agnihotri, aviation expert Harshavardhan, and Govind Pant Raju, APN consultant.

Raju said that the government’s response has been poor so far in dealing with the issue of fog. To make his point, he gave the example of Lucknow airport where till a few years back, flight cancellations and diversions were routine. A special devise for fog visibility was budgeted for, but it wasn’t functional, since it was felt that to track surface movement, radars were also needed. Then another round of huge funds was spent, but flights still remain affected. He added that the situation is same in railways, and even after 15 years of research on the fog visibility device, Trinetra, the plans remain on paper only.

Khanna said that they try to do their best, but so far these efforts have fallen flat. Even in foreign countries, results are not fruitful in dealing with emergencies like fog.

Raju said that political will is needed to deal with these issues on a war footing. He mentioned that Khanna has accepted that there is a gap in what the governments should be doing and in people’s expectations. He added that it’s not an impossible task to deal with this annual menace.

Wig said that railway drivers need visibility to see signals. For this GPS based signal locators and radar systems etc are needed. He added that railways suffer huge revenue losses and productivity is affected, but fool-proof technology is still unavailable.

Naqvi said that there are three issues. One, in such situations, public relations is important, and customers should be informed well in advance if their trains or flights are going to be delayed. Officials should have the sensitivity to inform the people.

Second, he said, that waiting lounges should be comfortable for people who are left waiting. “No technology is needed for all of this,” he said. Third, he said, that responsibility needs to be fixed. “Think of passenger loss, not just of railway revenue loss. People in India travel not so much for leisure as for work. Passenger loss has to be thought of more clearly,” he said, adding that technology and technicians also are needed, and skills need to be developed.

Agnihotri said that research is not up to the mark, and good quality monitoring is absent. “Even if we know that four days from now there will be smog, what’s the solution? A broader perspective is needed,” he said. He gave the example of Los Angeles and London where proper pollution laws have dealt with the problem of smog in a big way. He said that in Delhi, too, recently, cracker ban did have a positive effect, but sustained efforts are needed to help in controlling pollution.

Pandey said that technology and innovation are very much on the mark, and R and D is going on. It will take some time for things to be properly set up, he said.

Harshvardhan said that nearly 60 percent of the problem has been handled very well. “When visibility is less than 450 feet, only then flights are cancelled. In Delhi, it’s not just fog, but also pollution, dust and particles that are responsible for the poor visibility,” he said.

Raju said that since the problem occurs only briefly in peak winter in the north, seriousness goes away after the weather is clearer.

Pandey said that it’s an environmental challenge and admitted that sensitisation of officials is needed.

Naqvi said that if the problem is only of a week or ten days, why can’t the government take care of passengers during this time?

Harshvardhan said that policies and laws are needed to mark out responsibility and rights on this issue.

Wig said that passenger discomfort is recognised, but beyond a point not fait to expect railways to do much since limitations arise due to the environment.

Naqvi said that the issue will be dealt with much better of passengers too are treated like customers, and they are informed and looked after properly.