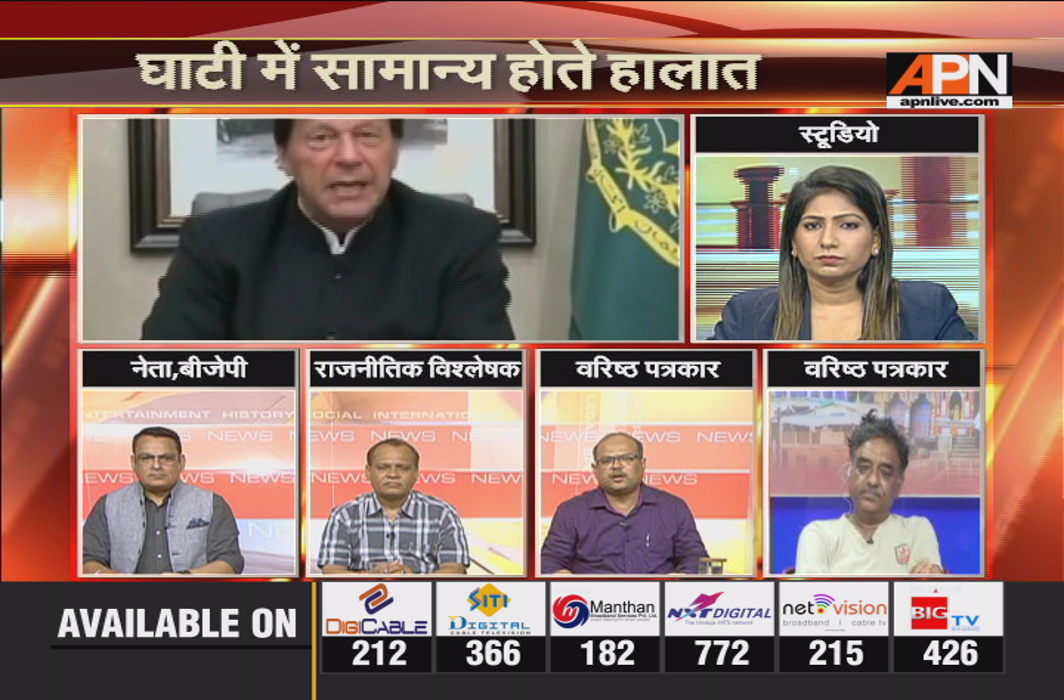 Schools have reopened in Jammu and Kashmir after a gap of 14 days, and the government is trying to normalise the situation. APN’s popular debate Muddadiscussed the issue of the scrapping of Art 370 and its fallout. Anchorperson Neha Dubey posed the questions to panellists including political expert Pradeep Gupta, BJP’s Kunal Kohli, noted scribes Prem Kumar and Rajiv Nain Bahuguna.

Bahuguna said:  “I am reiterating that Kashmir mudda was created due to political interests, that’s why the decision has to be political as well.”

Kumar said: “Since Art 370 was a constitutional decision, it should have been also been scrapped democratically.”

Kunal Kohli said:”Please note how Art 370 came in the first place. It was a Bill brought in by the President on Nehru’s request. Congress admitted that it was a ‘big mistake’. The local governments that have been hand in hand with the stone-pelters and other anti-social elements and have been interested in letting Art 370 remain.”

Bahuguna said: “Internet, telephone lines etc have to be restored. After all steps are taken, only then can we treat the situation holistically. If the locals are angry, it needs to be found out why that is so, and they need to get better assurances.”

Kumar said:”The people in the Valley were never asked.”

Kohli said: “So many jawans were killed, was that normal? Now there has been no violence, and that’s not considered normal?”

Kumar said: “Having a curfew-like situation is not normal.”

Kohli said: “When the ethnic cleansing happened, and Kashmiri Pandits were driven out, no one said anything. The problems arose when the Congress and local leaders got interested in the politics that would serve their interests. Modiji has undertaken the task of correction. Art 370 was misused, and it has been scrapped, this needs to be welcomed.”

Gupta said:”Government has undertaken a mammoth exercise. Army is for the security of the people. Miscreants were getting money from Pakistan and vested interests from the country as well. Today, even leaders like Kejriwal, who were anti-BJP, have praised the move.”

Bahuguna said:”When all parties are willing, it gets easy to push through the moves. I am worried that with all people allowed to own land in the Valley, won’t that affect the ecology of the Valley as well? We should not be interfering with the ecology, as Kashmir is the source of many river valleys, and helps in preventing global warming. Some years back there were floods in Kashmir, and that was never heard of before. Himalaya is different from Gurgaon or Noida, so we need to be careful before touching the ecology there.”