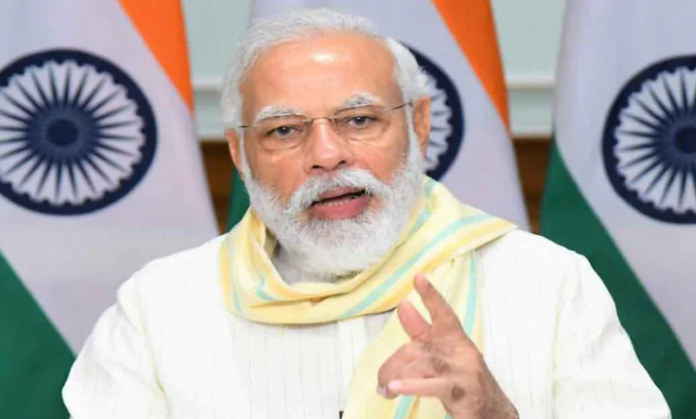 Sharpening attack on the Grand Alliance, PM Narendra Modi on Tuesday said allies of Jungle Raaj, who have problems with chants of Bharat Mata Ki Jai and Jai Shri Ram, have come together to ask for votes from people of Bihar. In a veiled attack on Rashtriya Janata Dal-led alliance, the PM said that there is a need to give befitting reply to such people.

While addressing a rally in Saharsa, the PM said that allies of jungle raaj do not want to hear these chants. He said that one group prevents people from saying Bharat Mata Ki Jai, while the other gets a headache from the slogan. He asked if it was possible for people of state where Goddess Chhathi is worshipped to not chant for the nation?

Hitting out at the RJD, the PM said people were not allowed to step out of their homes during jungle raaj as booths were captured. He said these people do not want to see Bihar progress and want to take the state back in time. The PM said voters of Bihar will not be misled by these people as they are not scared of them.

While addressing the poll rally, PM Modi also expressed confidence that NDA will come back to power in the state. He said the initial response has indicated that people of Bihar want the state to reach new heights under the NDA government. Praising the Nitish Kumar-led government in the state, the prime minister said that Bihar has left behind the darkness and anarchy as the double engine government is working towards the development of the state.

Also Read: After UP and Haryana, Madhya Pradesh to bring law against love jihad