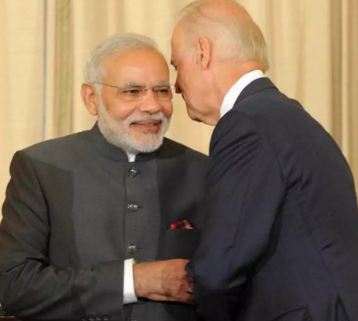 Hours after Democrat Joe Biden became the newly-elected US President, Prime Minister Narendra Modi on Saturday night congratulated the president elect on his spectacular victory over Republican Donald Trump in a close- presidential election. He said the contribution of Biden as vice president was critical and valuable towards strengthening Indo-US relations.

In his tweet, Modi also hoped for close co-operation from Biden to take India-US relations to greater heights.

In another post, Modi has sent congratulatory messages to vice president elect Kamala Harris over her path breaking success. He said her victory has brought immense pride to all Indian-Americans. Harris’s support and leadership will bolster India-US vibrant ties, said Modi confidently.

Other leaders also joined to congratulate Biden on becoming the 46th President of the United States of America.

Congress President Sonia Gandhi in a congratulatory letter to Biden and Harris, said India looks forward to close partnership under their leadership.Gandhi hailed Biden’s measured speeches during the campaign, said his focus on abridging divisions among the people, promotion of gender and racial equality, global cooperation and sustainable development of all countries, was encouraging. Biden’s wise and mature leadership will hold significance in bringing peace and development around the world, Gandhi added.

Harris is the first Black American and the first American of Asian descent to be the vice president of the United States. In praise of Harris, Gandhi said her success is a triumph for Black Americans and Indian Americans.

Meanwhile, the 77-year-old Biden has taken over at a time when the US is reeling from a weak economy, political polarisation and a coronavirus pandemic. Though in his first speech, Biden has pledged to be a President who would not divide the country but unite it.

On the other hand, Trump has filed a number of lawsuits challenging the election results. However, legal experts are of the opinion that Trump does not have much hope as he has not been able to procure evidence of any significant fraud.