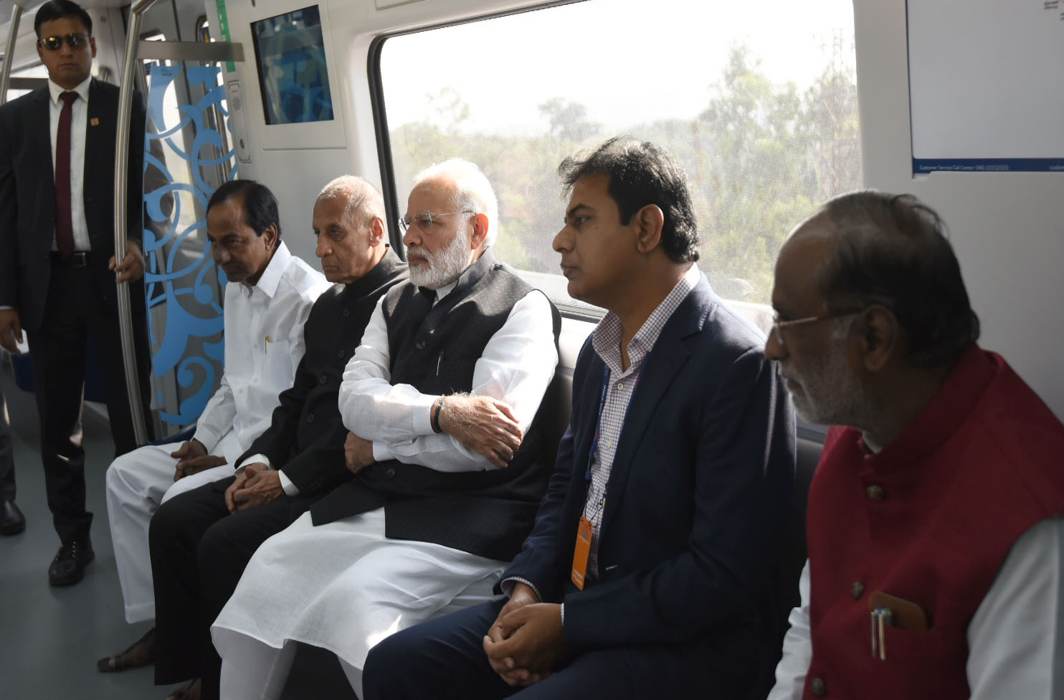 Prime Minister Narendra Modi added another project to the long list of UPA-era works that he has unveiled ever since assuming office in May 2014 as he inaugurated the Hyderabad Metro rail project on Tuesday.

I am raw html block.<

The Prime Minister, who later in the day is scheduled to kick off the Global Entrepreneurship Summit 2017 in presence of a high-level American delegation led by US President Doland Trump’s daughter and senior advisor Ivanka Trump, arrived in Hyderabad went on a metro ride from the Miyapur metro station to Kukatpally metro station and back.

The total distance covered in the inaugural ride by the VVIP commuters that included Prime Minister Narendra Modi, Telangana Governor ESL Narasimhan, chief minister K Chandrasekhar Rao, his son and the state’s municipal administration minister KT Rama Rao and Union minister for urban development Hardeep Puri among others, was about 12 km. The Prime Minister also unveiled the inaugural pylon which reflects the heritage and modernity of Hyderabad at the Miyapur station premises.

Sanctioned first in 2003 during the NDA-I government led by Atal Bihari Vajpayee but finally commissioned for construction during the term of Dr Manmohan Singh-led UPA regime following years of controversies and a cost overrun of over Rs 4000 crore, the Hyderabad Metro project has been executed by Larson & Toubro (L&T) through public-private partnership. The special purpose vehicle (SPV) set up with the Centre, erstwhile state government of undivided Andhra Pradesh and L&T as partners has invested Rs 14,123 crore for the project of which L&T Metro Rail Hyderabad Limited will contribute Rs 12764 crore while the Centre’s viability gap component is pegged at Rs 1258 crore.

According to a report in the Hindu, the newly inaugurated Hyderabad Metro will be thrown open to the public from Wednesday and will operate between 6 a.m. and 10 p.m daily. The inaugural stretch of the service will operate between Nagole to Miyapur via Ameerpet interchange station with three car trains running at 15 minute intervals and a carrying capacity of 1000 passengers.

Commuters can get tickets priced between Rs.10 and Rs. 60 depending on their destination station at the 26 km-stretch. The metro system is being built across three dense traffic corridors of Hyderabad — L.B. Nagar to Miyapur, Jubilee Bus Station to Falaknuma and Nagole to Hi-Tec City/Raidrug and once all three phases of the service are completed, the total area covered by the Hyderabad Metro would be 72 km.

Soon after inaugurating the Hyderabad Metro Rail project, Prime Minister Narendra Modi headed off for his much awaited talks with Ivanka Trump before their scheduled arrival at the launch of the Global Entrepreneurship Summit 2017. Union minister for external affairs, Sushma Swaraj also held separate talks with Ivanka Trump. The external affairs ministry said that the Sushma-Ivanka talks were a “productive discussion” on women entrepreneurship and empowerment which is also the theme of the eighth version of the GES that India is hosting for the first time.