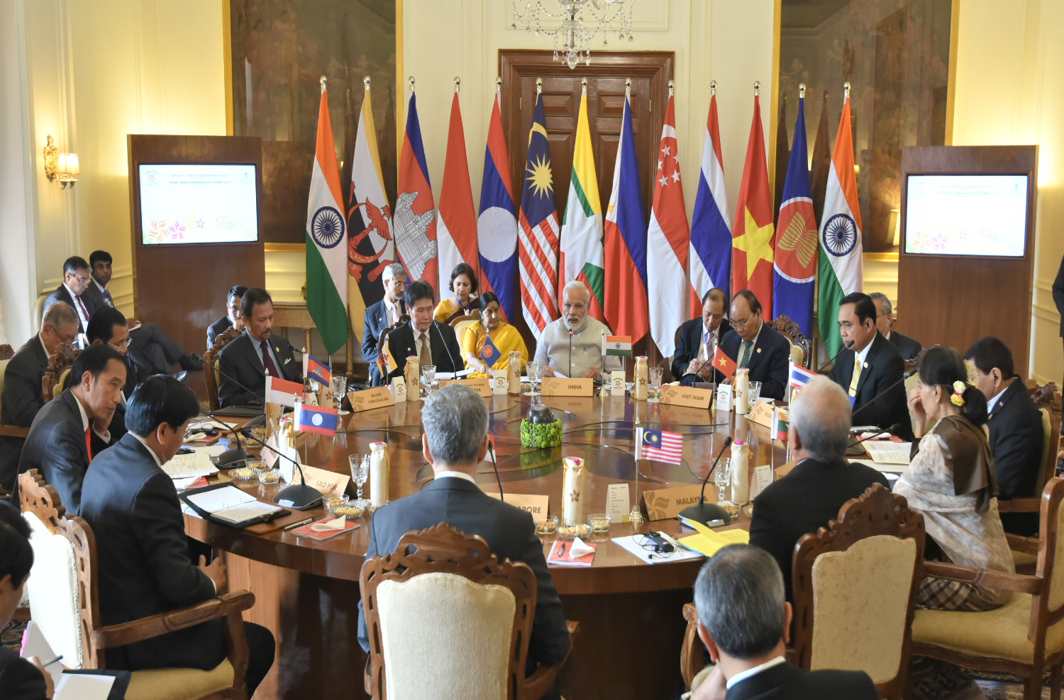 While laying emphasis on the freedom of navigation in the maritime domain, Prime Minister Narendra Modi on Thursday said security cooperation in this domain was the major focus of discussions with ASEAN leaders.

PM Modi is hosting heads of states of 10 ASEAN countries – the second time after former PM Manmohan Singh did it in 2012 and the first time when they would be chief guests at the Republic Day celebrations on Friday – for a summit on ‘Shared Values, Common Destiny’ to commemorate 25 years of dialogue partnership.

Addressing the India ASEAN Commemorative Summit in New Delhi, PM Modi said, “India shares the ASEAN vision for rule-based societies and values of peace. We are committed to working with ASEAN nations to enhance collaboration in the maritime domain.”

Talking about how the India-ASEAN partnership has grown since 1990s, he said, “Our partnership has evolved, we have made success in implementing the objective of ASEAN-India partnership for peace, progress and shared prosperity through five-year plan of action. Your collective presence in India has touched hearts of my 1.25 billion fellow Indians.”

PM Modi also emphasised the importance of ASEAN, which he said was at the centre of India’s Act East Policy. “Our friendship has been nurtured by our shared culture & civilisation linkages. The Ramayana, the ancient India epic continues to be a valuable shared legacy in ASEAN & Indian subcontinent. Buddhism also binds us closely. Islam in many parts of South East Asia has distinctive Indian connection going back several centuries.”

The PM highlighted that trade between India and ASEAN nations has “grown 25 times in 25 years”, adding, “Investments are robust and growing. We will further enhance trade ties and work towards greater interaction among our business communities.”

The two-day India-ASEAN Commemorative Summit in New Delhi is expected to give boost to the cooperation in key areas of counter-terrorism, security and connectivity amidst increasing Chinese economic and military assertiveness in the region.

Earlier in the day, the Prime Minister held bilateral talks with his counterpart from Thailand Gen Prayut Chan-o-cha on strengthening cooperation in strategic areas of trade, defence and security. He also held meetings with Singaporean Prime Minister Lee Hsien Loong, the current chair of the ASEAN grouping, and Sultan of Brunei Darussalam Hassanal Bolkiah.

Wednesday’s meeting came nearly a month after India and Myanmar inked an agreement on restoration of normalcy and development of the Rakhine state, from where thousands of Rohingya Muslims recently fled following incidents of violence against the community. Signed during Foreign Secretary S Jaishankar’s visit to Myanmar, the pact was the first government-to-government agreement by Myanmar with a cooperation partner focused on socio-economic development and livelihood initiatives in the Rakhine state.

These meetings on the sidelines of the India-ASEAN Commemorative Summit come in the backdrop of increasing Chinese economic and military assertiveness in the region. Despite having a free trade agreement in services and investments, ASEAN-India trade for the year 2016-17 was only $71 billion, in comparison to the $470 billion trade with China.

China has reacted cautiously to India hosting top ASEAN leaders on the country’s 69th Republic Day and hoped that all countries can work jointly to maintain peace, stability and the development of the region. China’s Foreign Ministry spokesperson Hua Chunying told PTI: “We hope all countries can work together for peace, stability and development of the region.”