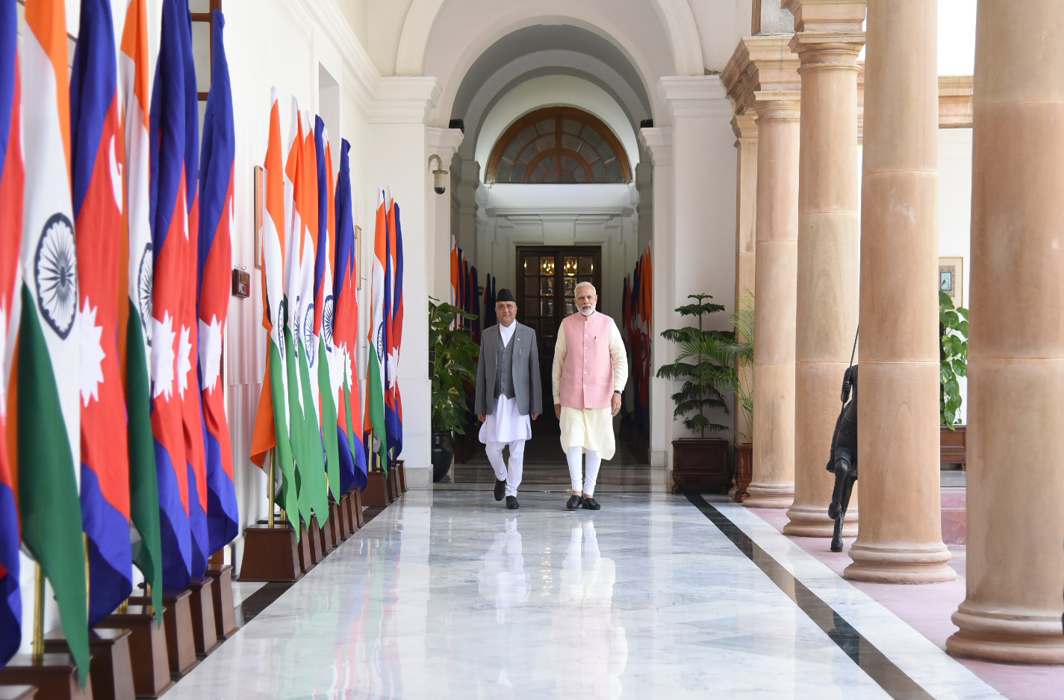 Prime Minister Narendra Modi held talks with his Nepalese counterpart Khadga Prasad Oli on Saturday and discussed the possibilities of expansion of bilateral ties in several areas including developmental cooperation, trade and investment, agriculture, energy, infrastructure and connectivity and the people to people contacts.

Both the Prime Ministers addressed a joint press conference after the delegation level talks. According to The Himalayan Times, Prime Minister Narendra Modi congratulated Nepal for entering a golden era and said that the political development in Nepal is a matter of joy for India as well.

He said  that there has been historical involvement of India in Nepal’s development and India will continue its support in the future as well for the economic development and prosperity of Nepal.

Nepal’s PM K. P. Oli said “Prosperity is our common goal. Prime Minister Modi and I had very constructive meeting”. He said that Nepal attaches great importance to its relation with India and as close neighbours the two countries share a common destiny. He said that he had constructive deliberations on specific agendas or bilateral importance with Pm Modi.

The visiting dignitary congratulated PM Modi on the progress made by India in the last two decades, and further mentioned that Nepal sees this as an opportunity for development.

The Kathmandu based The Himalayan Times reports said that PM Oli stressed the issues of hydropower development, water resources, improving cross border infrastructure including railways and connectivity through river navigation (connected with waterways). On this issue, PM Modi had also said that now the two countries would not just be land-linked but water linked as well.

Meanwhile, prior to the joint press conference, the leaders of the two countries had remotely inaugurated the Birgunj-based Integrated Check Point (ICP).

Nepal’s PM is on a three-day visit on the invitation of PM Narendra Modi. He is accompanied with his wife Radhika Shakya.

Besides official engagements in New Delhi, Nepal’s Prime Minister will be visiting G. B.  Pant University of Agriculture and Technology in Pantnagar, Uttarakhand on Sunday.

Oli arrived on Friday and held meeting with Prime Minister Narendra Modi. He was received by Home Minister Rajnath Singh at the airport.

Nepal’s PM was ceremonially welcomed at Rashtrapati Bhavan on Saturday morning. The visiting dignitary, while talking to the media persons said, “Friendship is most important and there is no comparison with friendship. Any treaty any agreement, everything starts with friendship. With our neighbours, particularly with India, we first expect friendship.”

He said, “I think we are neutral. Geographically, we are in [the] centre between two countries. We have two friendly neighbours and have a very friendly relationship with both of them. They are more developed and more advanced than us. Also, they are bigger in size and population as well. So, we want to take the opportunity to walk together with both of our neighbours. A feeling of understanding, cooperation and mutual trust is necessary.”
Minister of External Affairs Sushma Swaraj called on him before the two Prime Ministers held delegation level meeting at Hyderabad House. Later in the day Home Minister Rajnath Singh is also scheduled to call on him at Rashtrapati Bhavan.

The visiting dignitary met President Ram Nath Kovind after the ceremonial welcome. He will also meet Vice President Venkaiya Naidu in the evening.

India and Nepal ties were at odds last year when Indian origin Madhesi population were running a campaign for their rights. Kathmandu was alleging New Delhi for interfering in its internal affairs. Supplies from India were disrupted due to protests and political instability.