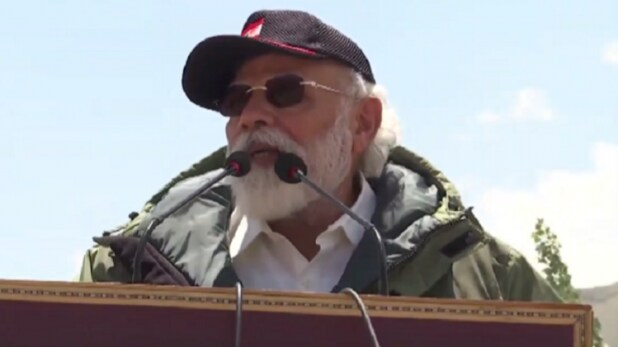 Prime Minister Narendra Modi arrived in Leh, Ladakh, early Friday morning for the first time after the June 15 clash with China in which 20 soldiers were killed in the line of duty. The PM interacted with soldiers in forward positions in what is seen as a major morale booster for the forces and a strong message for China.

Images showed PM Modi sitting in a camouflage tent with Chief of Defence Staff General Bipin Rawat and Army Chief MM Naravane as he spoke to the troops, seated at a distance from each other against the backdrop of the Himalayas. According to the Prime Minister’s office, he was at a forward location in Nimu. He reached there early in the morning and will return later today.

Located at 11,000 feet, the region is among the world’s toughest terrains, surrounded by the Zanskar range and on the banks of the river Indus. With temperatures in East Ladakh and Tibet well over 20 degree Celsius and high velocity winds sweeping the region, air operations in the area are a challenge with weight limits being imposed during take-offs particularly in Russian origin platforms. While IAF will use the air bases in the plains in the worst case scenario, the PLA Air Force will have serious difficulty in operating from Tibetan Plateau. The coming days will also be a test of unproven Chinese air platforms, missiles and land systems as their battle worthiness has never been challenged.

In his Man Ki Baat programme last week, PM Modi had said that India gave a befitting response to China on Ladakh. The prime minister said that those who eyed Indian territory in Ladakh have received a befitting response. If India knows how to maintain friendship, it can also confront someone and give an adequate response. Our brave soldiers made it clear that they will not allow anyone to taint the honour of Mother India,” PM Modi said. Army sources say the Chinese suffered 45 casualties during the late-night skirmish on June 15.