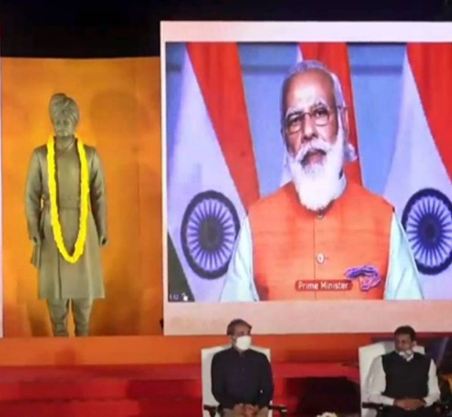 Prime Minister Narendra Modi on Thursday unveiled the life-size statue of Swami Vivekananda, the founder of the Ramakrishna Mission, at the administrative block of the Jawaharlal Nehru University via video conferencing. Union Minister of Education Ramesh Pokhriyal Nishank was present on the occasion. Opposing the event, the Jawaharlal Nehru University Students Union gathered at the north gate of the campus to raise their voices against the Centre’s anti-education and anti-student policies.

A proposal to construct Swami Vivekananda’s statue was sent to the JNU administration by Vipul Patel, who lives in the US. In 2015, the JNU administration had approved the proposal of construction of Swami Vivekanada’s statue on the campus. Patel has also sent a similar proposal to the Gujarat government, following which the state had approved the construction of the statue of Vivekananda.

The construction of the statue will take seven months to be completely cleared by sculptor Naresh Kumawat. Located about 300 metres from a statue of India’s first prime minister, the statue of Swami Vivekananda is some three feet taller than that of Nehru.

Pokhriyal said that the students who take an oath to follow in Swami Vivekananda’s footsteps will raise India’s stature across the world. PM Modi has given us a vision and a mission. This statue would usher in a new era in JNU’s history, he added.