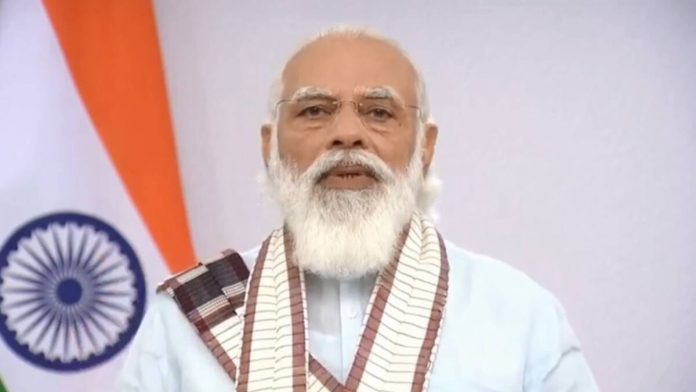 Prime Minister Narendra Modi in his virtual address on Durga Puja on Thursday urged people to follow social distancing and wear masks while ringing in the celebrations. As the five-day celebrations have kickstarted in West Bengal, PM Modi said this time the Durga puja is celebrated amid the coronavirus pandemic and people including Devotees of Maa Durga and organisers of pandala have shown amazing restraint. He said the number may have been affected but the grandeur and divinity is the same.

While addressing the Durga puja celebrations, the Prime Minister paid tribute to  icons of Bengal, saying whenever the need was felt in history, Bengal has always led the way and shown the path to India.There have been many renowned people who have come from Bengal and have contributed immensely in guiding the nation in the right direction, PM Modi added.

PM Modi said there are a number of Bengali freedom fighters, writers and others who have contributed to the history of India and if he takes names’ of all the great personalities, the day will come to an end but the names shall continue.

PM Modi spoke about the development schemes of the government in the state. He said houses have been built for about 30 lakh poor in Bengal under Pradhan Mantri Awas Yojana and about 90 lakh women have been provided with free gas connections under the Ujjawala scheme. Pradhan Mantri Jan Dhan Yojana has benefitted four crore poor of Bengal. Not only this, there was a task to deliver clean water in about 4 lakh houses of Bengal under the Jal Jeevan Mission Scheme.

The Prime Minister had yesterday informed about his virtual address. He tweeted that on  the auspicious day of Maa Durga Pujo’s Maha Sashti, he would join the Divine celebrations via video conferencing and shall also be extending my greetings to everyone.BJP is prepping for elections in Bengal which is scheduled to take place in 2021.