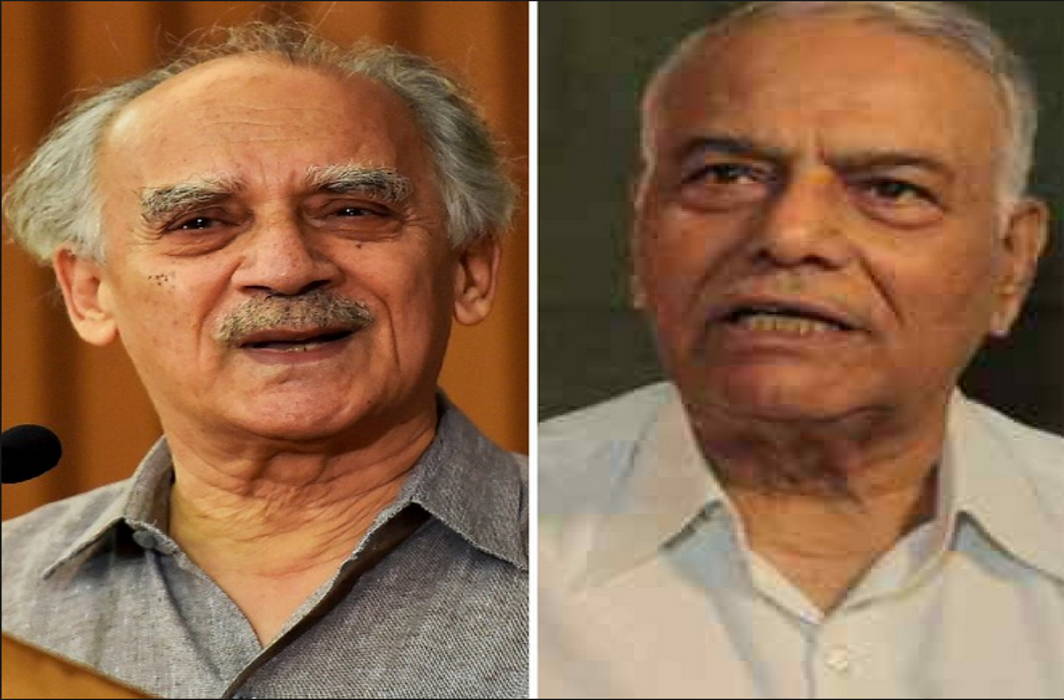 Former ministers in the first NDA government led by Atal Behari Vajpayee, Arun Shourie and Yashwant Sinha on Saturday, August 11, questioned the manner in which NDA-II government under Narendra Modi is functioning.

During a discussion on ‘Save Democracy – Save Constitution’ here, they alleged that decisions relating to different ministries were being taken “single-handedly” by the Prime Minister’s Office (PMO) while the ministers had no clue about them, they alleged.

“All ministries are running from the Prime Minister’s Office. Other ministers have no work. If someone (the other ministers) is saying he is busy, he is lying,” Sinha said. “While the PM is only the first among equals in his minister’s council, this isn’t the case with the Modi government. This is the famous Gujarat model of governance.”

Arun Shourie, another BJP veteran and former Union minister, said that the Modi government was a government of two men — BJP president Amit Shah and Modi himself. Shourie alleged that the CBI was directly reporting to Shah.

Earlier, in a press conference on August 8, they had pointed out that till Prime Minister Narendra Modi left for France in 2015, neither the then Defence Minister Manohar Parrikar nor foreign secretary S Jaishankar were aware of the changed Rafale deal announced a couple of days later.

Sinha reiterated his allegations that the controversial Rafale deal was a “Rs 35,000-crore” scam. “Bofors scam was Rs 64 crore. This is a Rs 35000 crore scam.”

BJP president Amit Shah on Friday brushed off allegations of corruption levelled by former Union ministers Arun Shourie and Yashwant Sinha in the Rafale deal, saying credence should be given to the defence minister’s statement and not what those “who did not get jobs”.

“Will you give credence to the defence minister’s statement or those who did not get jobs?” Shah said during an interview at a book launch in the national capital.

Neither Shah nor any member of Modi Cabinet has, however, countered any of the specific allegations levelled about the alleged scam in Rafale deal.

Sinha alleged that Home Minister Rajnath Singh, who is the No. 2 man in the Cabinet, had been kept in the dark about the BJP’s move to yank support from Mehbooba Mufti’s PDP in Jammu and Kashmir. He also claimed that Singh wasn’t aware of the Naga peace accord in 2015.

“The External Affairs Minister (Sushma Swaraj), similarly, is not kept in the loop on foreign policy matters. She has become a Twitter mantri. Arun Jaitley (finance minister) had no idea about demonetisation. Defence minister was not aware of the Rafale deal when it happened,” said Sinha.

The Prime Minister’s Office is controlling all ministerial decisions while ministers are sitting idle, he alleged.

Shourie said there was a threat to the Constitution and democracy. “Undoubtedly, the Constitution and democracy are in danger. 72 lynchings have happened so far, 54 witnesses have turned hostile in Soharabuddin (fake encounter) case… CBI is being misused…(these) are live examples of the new normal and there seems no hope that the things will change,” Shourie alleged.

The veteran journalist said that the media is fearful because “their advertisements could get blocked”.

Claiming that the Shah-Modi duo was aware that the “ground was slipping away from them” and that “they will do everything to cling onto power”, Shourie said Opposition parties “must come together in the 2019 polls”.

“…The country will be in peril if they (BJP) came back to power… Leaders of all Opposition parties must not stand on prestige issues, forgo the past and the future, and join hands for a one-to-one contest,” he said.

MP and actor-turned-politician Shatrughan Sinha said he won’t quit the BJP on his own.”However, if they want to throw me out, then I will not challenge their wisdom,” he said.

“People ask me why do you criticise the BJP so much despite being its member. I tell them I belong to the people of India first. I try to give honest feedback to my party and its leadership,” he said.

Trivedi said, “Spirit of India has vanished today and even Supreme Court judges are seeking justice… Parliament is not working in a rightful manner… I would say all the four pillars have been compromised.”

“Today, judges fear to take a strong decision and stand. People and press are also fearful nowadays. There were caste biases earlier also but now fringe elements have got confidence to rule the roost,” he said.

AAP leader and Rajya Sabha member Sanjay Singh alleged that the Modi-led government was the biggest threat to democracy.

“It is the height of foolishness that the UP government is showering rose petals on kanwariyas from helicopters,” Singh said. Kanwariyas who were indulging in vandalism were not real pilgrims, he said.