The Congress on Thursday attacked Narendra Modi government for letting businessmen and corporates flee the country with public money.

The case in point was that of billionaire diamond jeweller Nirav Modi who left the country on Jan 1 this year. On Jan 31, the CBI registered an offence against Punjab National Bank (PNB) officials as well as Nirav Modi and his relatives, who are partners of two diamond firms in Mumbai, for allegedly committing a Rs 280 crore fraud in 2017.

The scam turned out to be much bigger as earlier this week, the PNB flagged fraudulent transactions worth over Rs 11,500 crore in its Mumbai branch in the case.

Addressing a press conference, on Thursday, Feb 15, Congress spokesperson Randeep Surjewala wondered if  Nirav Modi, whom he referred to as ‘Chhota Modi’, was tipped off by someone within the government about the PNB complaint like former IPL czar Lalit Modi and business tycoon Vijay Mallya. “Was he tipped off like Lalit Modi and Vijay Mallya to escape by someone within the government? Has it become the norm for letting people run away with public money?” Surjewala asked.

He also released a picture of the PM and Nirav Modi at the World Economic Forum in Davos last year. 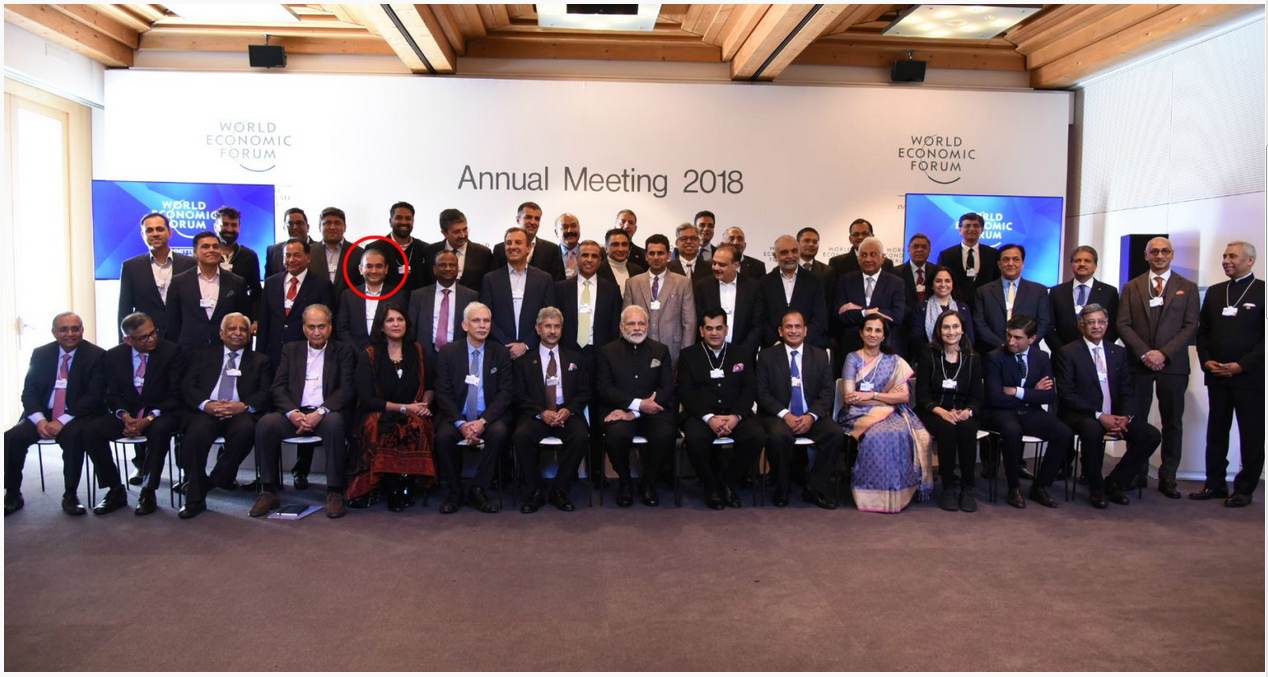 Union minister Nirmala Sitharaman hit back, blaming it on Congress-led UPA government: “Whatever is coming out is the result of the previous UPA govt, action will be certainly taken on it.”

Surjewala’s jibe of ‘Chhota Modi’ also cut them to the quick. Another union minister Ravi Shankar Prasad took strong exception to it.

“What is this word ‘Chhota Modi’ ? BJP takes strong offence to the kind of language being used by describing someone like that. It is derogatory, scandalous and demeaning,” fumed Prasad.

Earlier in the day, Congress President Rahul Gandhi said “being seen with the Prime Minister helped the businessman flee the country.”

Taking a dig at the PM, Rahul Gandhi tweeted: “Guide to Looting India by Nirav MODI. 1. Hug PM Modi 2. Be seen with him in DAVOS Use that clout to: A. Steal 12,000Cr B. Slip out of the country like Mallya, while the Govt looks the other way. From1MODI2another”

Releasing a group photograph where Nirav Modi was seen along with other top Indian businessmen and the Prime Minister, the Congress claimed that a gentleman named Hariprasad, had complained to the Prime Minister’s Office (PMO) as early as July 26, 2016, about a bank fraud involving Nirav Modi and his uncle Mehul Chokshi — who owns Gitanjali jems and jewellery — but “the government authorities were sleeping on their jobs.”

The Congress said that the PMO acknowledged the complaint but the PMO, the Finance Minister and the Financial Intelligence Unit (FIU) did not act firmly on the complaint to stop the designer-businessman from fleeing India.

The Congress said Hariprasad had mentioned that there were as many as 42 FIRS against companies owned by Nirav Modi and Chokshi.

“Why did the Prime Minister allow such a fellow to be part of the Indian business delegation?” asked Surjewala.

Though the scam, mainly involving the PNB, is about Rs 11,000 crore, the Congress said it would be around Rs 30,000 crore if banking experts are to be believed, as more banks were exposed to companies owned by Chokshi and Nirav Modi.

Posing five questions to the government, the Congress said the Prime Minister should speak on the “biggest banking loot of the past 70 years” and explain how the jewellery designer was allowed to flee despite the PNB writing to the CBI on January 29 this year to issue a look-out circular against Nirav Modi.

“Who is protecting Nirav Modi/Mehul Chokshi? Who is responsible for the biggest bank loot scam” asked Mr. Surjewala.

When pointed out that several BJP leaders claimed that the scam was going on since 2011 when the United Progressive Alliance was in power, the Congress chief spokesperson said, “The complaint of PNB to CBI mentions that Letters of Understanding were between February 9 and 14, 2017. By making counter allegations, there is a suspicion that the BJP is trying to hide something and protect them.”

Meanwhile, the Enforcement Directorate on Thursday conducted raids on premises linked to billionaire diamond merchant Nirav Modi in three States – four locations in Mumbai, including Modi’s office and showroom in Kala Ghodathree; in Surat; and two in Delhi – in connection with the fraudulent transactions in the PNB, said media reports quoting ED sources.

The premises of a senior bank official was also searched.