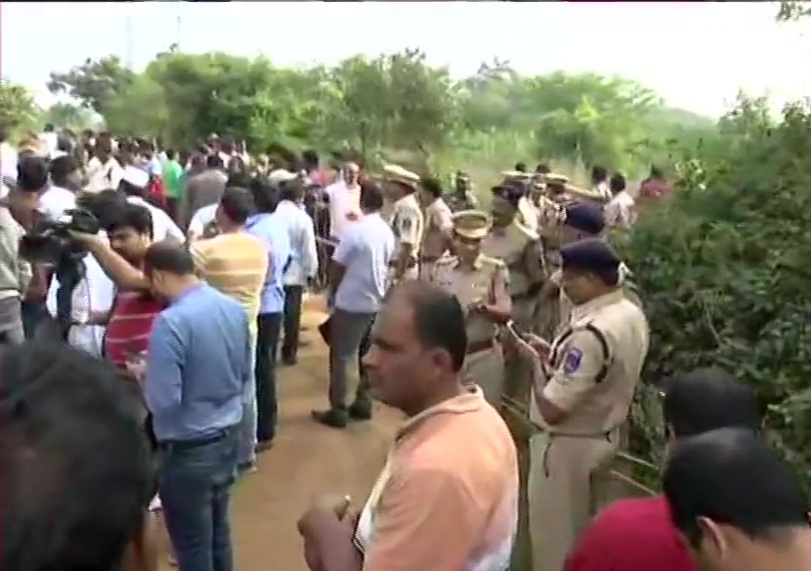 All four men accused of raping and murdering a 26-year-old veterinarian in Hyderabad were shot dead in an early morning encounter when they reportedly tried to escape.

The Telangana Police had taken the men to the spot, around 50 km from Hyderabad, where the charred remains of the woman were found last Thursday to reconstruct the sequence of events.

Cyberabad Police Commissioner VC Sajjanar told reporters, “The accused were killed in a police encounter at Chatanpally, Shadnagar today between 3 am and 6am. I have reached the spot and further details will be revealed.

“The four men, Mohammed Arif, 26, Jollu Shiva, 20, Jollu Naveen, 20, and Chintakunta Chennakeshavulu, 20, were shot dead by the police in “self-defence” when the accused allegedly attacked the policemen and tried to snatch an officer’s gun in their bid to escape, a senior officer said.

The accused were arrested a day after the crime and had been in police custody since Wednesday.

The incident had triggered nationwide outrage and heated debates were witnessed in the Parliament, on news channels and social media. Activists, celebrities, politicians and citizens demanded justice for the woman.

“The accused must be lynched in public,” Rajya Sabha member Jaya Bachchan had demanded in the House. “Der aye, durust aye,” she said outside parliament today.

This morning, when the news of the “encounter” flashed on TV screens and widely shared on social media, praise showered on the cops. People gathered at the encounter site and raised slogans like “DCP Zindabad, ACP Zindabad”. Some locals even showered rose petals on the police personnel. Neigbours of the veterinarian offered sweets and tied rakhi to cops.

The father of the woman veterinarian was among the first to react. “It has been 10 days to the day my daughter died. I express my gratitude towards the police and government for this. My daughter’s soul must be at peace now,” he said.

Similarly, Asha Devi, mother of the 23-year-old Nirbhaya, a paramedic student who was gang-raped and left to die in Delhi in December 2012, said, “I am extremely happy with this punishment. Police has done a great job and I demand that no action be taken against the police personnel.”

The convicts in the Nirbhaya case have been awarded death penalty and one of them have filed a mercy plea. “I have been running from pillar to post for the last seven  years. I appeal to the justice system of this country and the government that Nirbhaya’s culprits must be hanged to death at the earliest,” she urged.

“We salute you,” said Saina Nehwal as she lauded Hyderabad police.

“In UP, this is happening every day not just in one district but in every district. Be it young girls or aged women, nobody is being spared. There is jungle raj (rule) in Uttar Pradesh,” she said, adding that when she was Chief Minister she had acted even against members of her own party.

Bihar politician Rabri Devi appears convinced that the morning’s incident will “act as a deterrent against criminals”. “We welcome this. In Bihar, too, cases of crimes against women are on the rise. The state government is lax and doing nothing,” she said.

YSR Congress Party leader Kanumuru Raghu Rama Krishna Raju said that the accused “deserved to be shot dead”. “God has been kind that they were shot dead, this is a good lesson. They tried to run away and they were killed. No NGO should oppose it and if they do so, they are anti-national,” he said outside the parliament.

Such encounters should be made legal, suggested BJP’s Locket Chatterjee.

“What police has done is very courageous and I must say that justice has been delivered. Legal questions over it are a different matter, but I am sure people of the country are at peace now,” yoga guru Ramdev said.

A few voices, however, condemned and questioned the police action.

Anybody cheering mafia-style Hyderabad ‘justice’ should never complain about ISIS beheadings, Taliban lynchings & Maoist kangaroo court executions. Modern, civilised state evolved over millennia, but we still have no patience for due process—as long as victims are ‘others’..

Advocate Vrinda Grover said the police action is “absolutely unacceptable” and questioned if this is how the state is going to ensure women’s safety.

In a Facebook post, she said, “So all that the state will do in the name of ensuring that women live as equal and free citizens is to add to its arsenal of unlimited arbitrary violence! Supreme Court of India has directed that in every encounter case – There must be an FIR registered against the police and an investigation; and an independent judicial enquiry into this ‘encounter’. No Investigation, no Prosecution, these killings distract the public and save the police and state from any accountability.”

BJP MP Maneka Gandhi said, “Whatever has happened is dangerous… you cannot kill people because you want to. You cannot take law in your hands, they (accused) would have been hanged by the Court anyhow. If you’re going to shoot them before due process of law has been followed, then what’s the point of having courts, law and police?”

“I don’t know facts of what happened. As responsible person, all I can say is, it must be thoroughly inquired into to find out if it was a genuine encounter, whether they were trying to flee or not,” Congress leader P Chidambaram said.

Supreme Court advocate tweeted that now “nobody will ever know if the four men killed by the police were innocent men, arrested fast to show action. And whether four of the most brutal rapists roam free, to rape and kill more women”.

And what on earth were the police “investigating” at 3.30 am all this time later? When they were sleeping during the golden hour of evidence, refusing to register an FIR, when the young vet was alive?

“When a criminal tries to escape, police are left with no other option, it can be said that justice has been done,” Chhattisgarh Chief Minister Bhupesh Baghel said as he tried to defend the police.

Encounters take place when instead of asking for a better Criminal Justice System the society puts the entire accountability on the Police.

Wish we get faster justice in the court rooms rather than on the streets. #Hyderabad#hyderabadpolice#HyderabadHorror pic.twitter.com/kxazXsGyRF