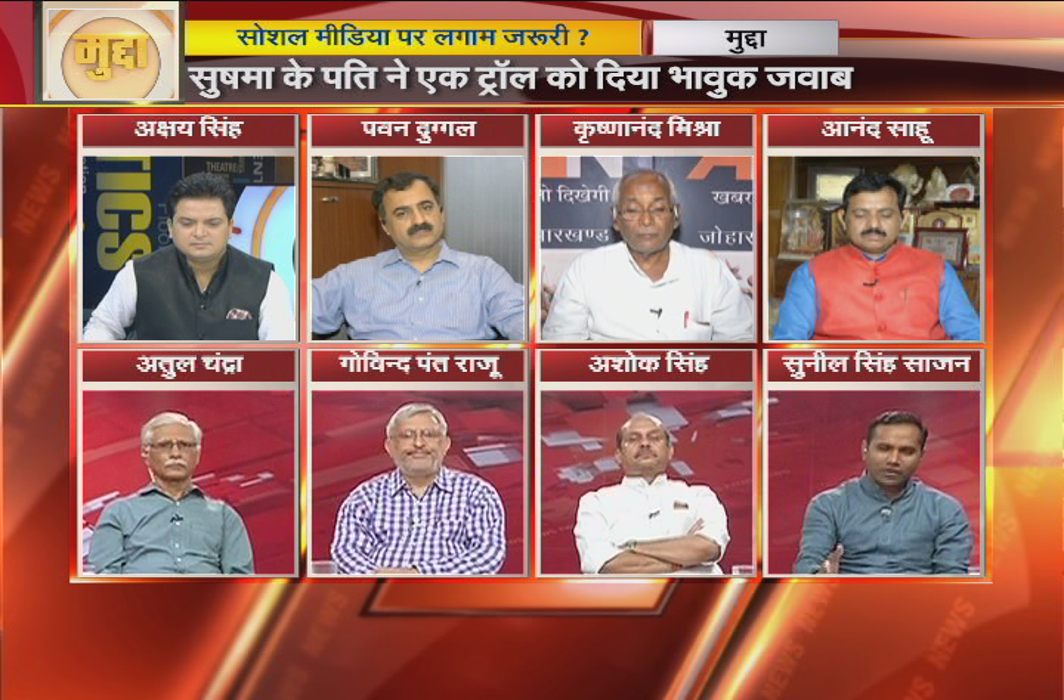 Panellists feel that there are both pros and cons to social media, and hate campaigns are thriving in the absence of clear laws

With growing penetration of smartphones in India, social media has become a hotbed of rumours and slander. Recently, trolls have targeted External Affairs Minister Sushma Swaraj. Ever since it emerged that the Ministry of External Affairs had expeditiously granted a passport to a Hindu-Muslim couple and transferred an official for allegedly harassing them, trolls have been attacking the minister. Swaraj herself highlighted this on Twitter. APN’s popular debate Mudda took up the issue. Anchorperson Akshay posed the questions to panelists including BJP’s Anand Sahu, noted scribe Atul Chandra, RJD’S Ashok Singh , JD-U‘s Krishnanand Mishra, cyber expert Pawan Duggal, SP’s Sunil Singh and APN’s Govind Pant Raju.

Chandra said: “When trolls are endorsed by senior leaders and politicians, they feel emboldened. Those who are trolling get sanction from certain quarters. In UP gou rakhsaks have spread all kinds of rumours in the past and that has triggered violent incidents as well.”

Sahu said: “We have freedom of expression. Rights and duties are also well listed in the constitution. But rumour-mongering in social media is assuming dangerous proportions. People are unable to draw the line, and there appears to be a free-for-all. On one side, social media offers a platform for enhancing knowledge, but it is being misused heavily by those who want to spread hate.”

Sunil Singh said: “It’s a fact that social media has gone beyond the limits of acceptable behaviour. The government’s IT cell should be active in ending cyber crime.”

Duggal said: “There is no law to regulate social media, and therefore fake news abounds. The IT Act makes no mention of fake news.”

Sunil Singh said: “The BJP’s IT cell itself is spreading fake news.”

Raju said: “Stopping fake IDs should not be tough for the government. There are pros and cons to the issue. On social media, citizens can raise voices whenever something untoward is happening, but the way Sushma Swaraj has been trolled for giving passports to an interfaith couple is not right.”

Duggal said: “People are behaving like they have a new toy in hand. Learning about cyber hygiene, cyber etiquette and cyber security is now very important. Steps taken by the government to encourage social media are good, but there is a long way to go before we can get mature on this front and not get swayed by opinions foisted on us by vested interests.”

Sahu said: “We are trying to make people aware. There should be a line stating that those who pass adverse remarks on social media will not be spared, like the tobacco warnings on cigarette packs. Fake news on social media is spreading like cancer.”

Chandra said: “It’s all for political benefit, therefore no attempt to stop it is being made.”

Sahu said: “We can’t arrest anyone on the basis of a social media post.”

Raju said: “Lot of examples of exploitation of social media and posts triggering violence are there. Rumours have been spread in the past to inspire fear.”

Sunil Singh: “Too much is going to be lost due to the hate campaign, also there appears to be a trial on social media even before the courts look at a particular case.”

Chandra said: “Our politicians are making irresponsible statements every day. People are getting habituated to making loose remarks.”

Raju said: “There are many dangerous signals.”

Sunil Singh:”The hate campaign should be stopped at an urgent level.”

Raju said: The support and cooperation of people will be required to stop the hate campaigns on social media.”