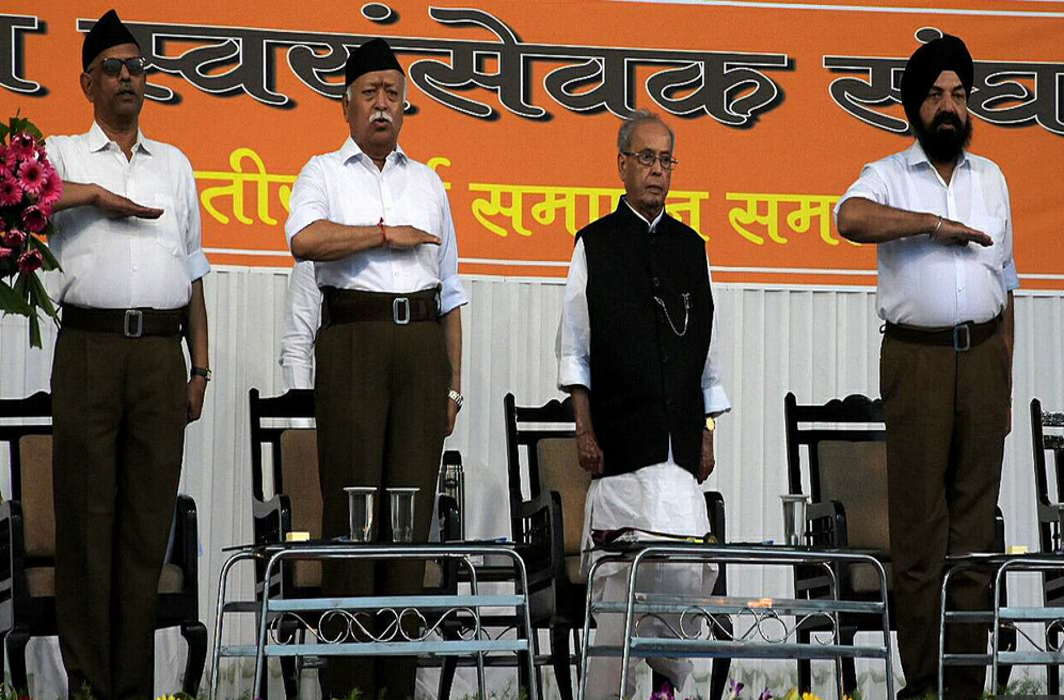 Former president Pranab Mukherjee’s speech at RSS headquarter in Nagpur last evening, (Thursday, June 7) put paid to all apprehensions about his decision to attend the function and what he would end up doing there.

For days after his plans to go there became known, many believers in democracy and secularism had been overly critical of Mukherjee. What Mukherjee said there should have laid their fears to rest, but, for many, it didn’t, even though the man with a lifetime spent in Congress ripped apart the basic core of RSS tenets while speaking from its platform, in its headquarters, in front of all the trainees and in presence of the sarsanghchalak – RSS chief Mohan Bhagwat – himself.

While RSS functionaries and sympathisers went to town praising Mukherjee, his speech and his visit as being in tune with RSS core beliefs and its “endorsement”, their detractors walked into the trap, focusing on the trivial – like the symbolism of visit, the comment in visitor book about RSS founder KB Hedgewar, standing when the Sangh anthem was played – rather than the substance of what he said.

That is, in fact, what the RSS would like them to focus on, discuss and debate, accusing them of ‘intolerance’ while portraying RSS as being so broadminded as to invite a former, hardcore Congress man to their function as an ‘honoured chief guest’. They would have done well to repeat what Mukherjee said and contrast it with RSS belief and practice, as seen in the speech and actions of workers of not only the parent body but also its offshoots like Vsihwa Hindu Parishad, Bajrang Dal and others.

RSS chief Bhagwat, speaking before Mukherjee, had kept his speech suitably toned down, letting out the troublesome element of RSS tenets only while referring to its formation in 1925 “out of realisation for the need to organise Hindu society”. Otherwise, he spoke of need for a common goal and destiny by forging a unity out of the differences in culture, language etc.

Another notable aspect, overlooked by many, was that the RSS chief refrained from any talk about India being a ‘Hindu rashtra’, which he has been talking about at fairly regular intervals. That he didn’t say it in one of the largest and most important RSS gatherings can be out down to the Pranab effect.

His followers picked up other portions and likened them to portions of Mukherjee’s speech talking about India’s diversity.

Those were taken quite out of context, for what Mukherjee had said was quite different, if one goes through his speech, as reproduced  by NDTV. Bhagwat also did not refer to Hedgewar’s ‘teachings’ contained in the booklets (pathey) provided to RSS swayamsevaks (workers) for their ready reference. Hedgewar talks about Indian being a nation of Hindus and for Hindus, and refers to Muslims as ‘yavana snakes’, using the term originally used for people of Greece (Yunan).

Mukherjee made several points that go against what RSS stands for and preaches. He may have made a courteous comment on the visitor’s book about RSS founder KB Hedgewar, but what he said was quite different. Mukherjee focused on the themes the RSS talks about, but gave an entirely different perspective to them: nation, nationalism and patriotism.

He did not once RSS in his speech while talking about these themes, while he quoted several Congress leaders extensively. He talked about Jawaharlal Nehru, a leader RSS and the crop of organisations it heads have spared no effort to vilify. At the same time he never once mentioned any of the Sangh leaders or their ideologues while talking about personalities who contributed to the making of India: No Vinayak Damodar Savarkar, MS Golwalkar, BS Moonje, or Shyama Prasad Mukherjee.

He spoke of tolerance, pluralism and steadfast loyalty to the Indian Constitution, reading out the Preamble that enshrines the core of a secular democratic polity.

Also, while some may crib about his standing up when the RSS flag was hoisted and its anthem played (as common decency demanded – and it does not detract from his beliefs and practice; what else should he have done?) he also stood out: wearing an Indian dress of dhoti and achkan, rather than shirt and trousers, and standing with hands by his sides rather than offering the RSS salute of one arm raised across the chest. He was being nice, not submissive or obsequious.

“India’s national identity emerged from a long-drawn process of confluence and co-existence. The concept of modern India was articulated from various Indian leaders and it was not bound by race or religion,” he said.

He told the RSS workers, who have been hearing their chief talk about Hindu rashtra and Hindu rashtravad,  that India was born through the process of assimilation of waves of people who came and settled here. He also talked about pluralism and tolerance being the soul of India, rejected the idea of defining India on the basis of religion, and talked about the welfare of the people being the welfare of the ruler.

The former president did not praise the Sangh or its activities once. Instead, rejecting the idea of religion or caste-based discrimination, Mukherjee said: “At the heart of this violence is darkness, fear and mistrust. We must free our public discourse from all forms of violence, physical as well as verbal… It is our composite culture that makes us into a nation. India’s nationhood is not one language, one religion, one entity.”

He was giving out a very clear message to the RSS, from its own precincts. If the Congress fails to build on this, it has its own incompetence to blame, rather than criticise Mukherjee to give a chance to RSS to claim wider acceptance and legitimacy.

While Mukherjee’s critics failed to take further what he had said to use it as a starting point against RSS, the fears they expressed – of RSS using his visit to claim wider acceptance and legitimacy through misrepresentation and propaganda – became a self-fulfilling prophecy.

A mainstream newspaper ascribed to Mukherjee words he never uttered to say “President Pranab Mukherjee said on Thursday that political untouchability is not a solution to ideological differences.” This was a derivation employing the term used by BJP and RSS leaders (untouchability’). Mukherjee had said, as the daily went on to quote, that “A dialogue is necessary not only to balance the competing interests but also to reconcile them.”

Moreover, hours after his speech at the RSS headquarters in Nagpur, a morphed picture of former President Pranab Mukherjee surfaced on social media. In the photo, he is seen raising his hand up to his chest in the RSS way of salutation along with leaders of the organisation. In reality, Mukehrjee had stood in attention.

The image prompted his daughter and Congress leader Sharmistha Mukherjee to say that as she had feared and cautioned her father against, the “dirty tricks department” of the BJP-RSS was at work in full swing.

“See, this is exactly what I was fearing and warned my father about. Not even few hours have passed, but BJP/RSS dirty tricks dept is at work in full swing!” she said, retweeting a tweet showing the “morphed” picture of Pranab Mukherjee performing the RSS salute along with its leaders in Nagpur.

Ms Mukherjee had on Thursday said her father was giving the BJP and the Rashtriya Swayamsevak Sangh a handle to plant false stories.

“Hope @CitiznMukherjee now realises from todays’ incident, how BJP dirty tricks dept operates. Even RSS wouldn’t believe that u r going 2 endorse its views in ur speech. But the speech will be forgotten, visuals will remain & those will be circulated with fake statements,” the former President’s daughter tweeted.

Her warnings came soon after rumours about her joining the BJP came up ahead of Mr Mukherjee’s visit to Nagpur. She dismissed the “rumours” of her joining the BJP as “false” and alleged they were the handiwork of the BJP’s “dirty tricks department”.

She said she would rather leave politics than quit the Congress.

Fortunately, the official press conference by Congress immediately after Mukherjee’s speech was more or less in keeping with the spirit of what he said. The party said his speech is a “lesson in true Indian philosophy” and asked if the Sangh will accept the “sagacious advice” that pluralism is central to Indian nationalism.

The party said Mukherjee’s speech was a lesson in ‘Raj Dharma” to PM Narendra Modi. At the same time, it did not seem to agree with Mukherjee’s remarks that public engagement and dialogue can reconcile differences, questioning the Sangh’s mindset. It reiterated its long held view that the Sangh had ducked participation in the freedom struggle.

“Mukherjee taught a glowing lesson to RSS from its own stage. He tried to remove the cobwebs of parochialism from the minds of RSS. He held a mirror to RSS and tried to tell it that India lives in its diversity, non-violence and tolerance,” Surjewala said.

“We believe in democratic dialogue across different thought processes. However, dialogue is possible only with those who have open mind and are willing to change…” Surjewala said. He added, “But there are some basic truths. RSS opposed the freedom struggle, called it pseudo-nationalism. It never believed in India’s diversity. Nathuram Godse was closely associated with RSS.”

Congress general secretary Digvijay Singh tweeted: “Pranab Da has tried to “Beard the Lion in his own den”. Let’s see if they take his advice seriously or it was just a Photo Op for them.”

Historian Ramachandra Guha said in a tweet: “Mohan Bhagwat’s unitary and homogenising nationalism has been shamed by Pranab Mukherjee’s catholic and broad-minded understanding of what it means to be an Indian. Mukherjee dwells on the significance of our Constitution, a document Bhagwat would not or could not mention.”