Gandhi will be joined by veteran actor Jackie Shroff and actor Sharmin Segal, who made her Bollywood debut with Sanjay Leela Bhansali’s Malaal in the film. 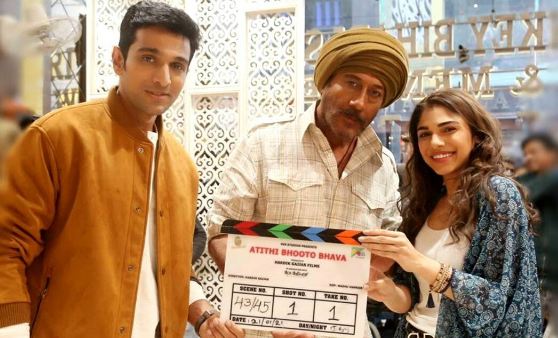 The Scam 1992 actor Pratik Gandhi is all set to feature in upcoming romantic comedy drama titled Atithi Bhooto Bhava. The film is directed by Hardik Gujjar and produced by Pen Studios. On Friday, the shoot of the film commenced in Mathura.

Gandhi will be joined by veteran actor Jackie Shroff and actor Sharmin Segal, who made her Bollywood debut with Sanjay Leela Bhansali’s Malaal in the film.

Excited to collaborate with Gajjar, who is also co-producing the film, Gandhi said the film will be a unique love story. It will be a learning experience for him, since he will be working with a supremely talented actor Jackie Shroff.

Earlier, the actor gave a sneak peek into the film’s night shoot by sharing a photo from Mathura on Instagram. He captioned the photo as, I am not into slang, but I am chilling today. It’s all good in the hood. How cool is that!. Through the post, he also informed that temperature in Mathura was dipping to 11 degree Celsius.

Talking about the film, Pen Studios’ Jayantilal Gada said that he is glad to associate with Gandhi and Gajjar again after Ravan Leela. Both the films are content driven, which has always been the aim of Pen Studios’ aim, added Gada.

The makers have not yet decided the release date of the film. However, they have reportedly planned to release the film sometime this year.

Meanwhile, Gandhi before appearing in Hardik Mehta’s Scam 1992, did several Gujarati plays and movies. He played the lead role in thriller drama, Wrong Side Raju, which received National Award for the best feature film in Gujarati.

On the work front, Gandhi will next be seen in another movie of Hardik Gajjar titled Ravan Leela. The actor will also be seen in  filmmaker Tigmanshu Dhulia’s web adaption of the book Six Suspects.