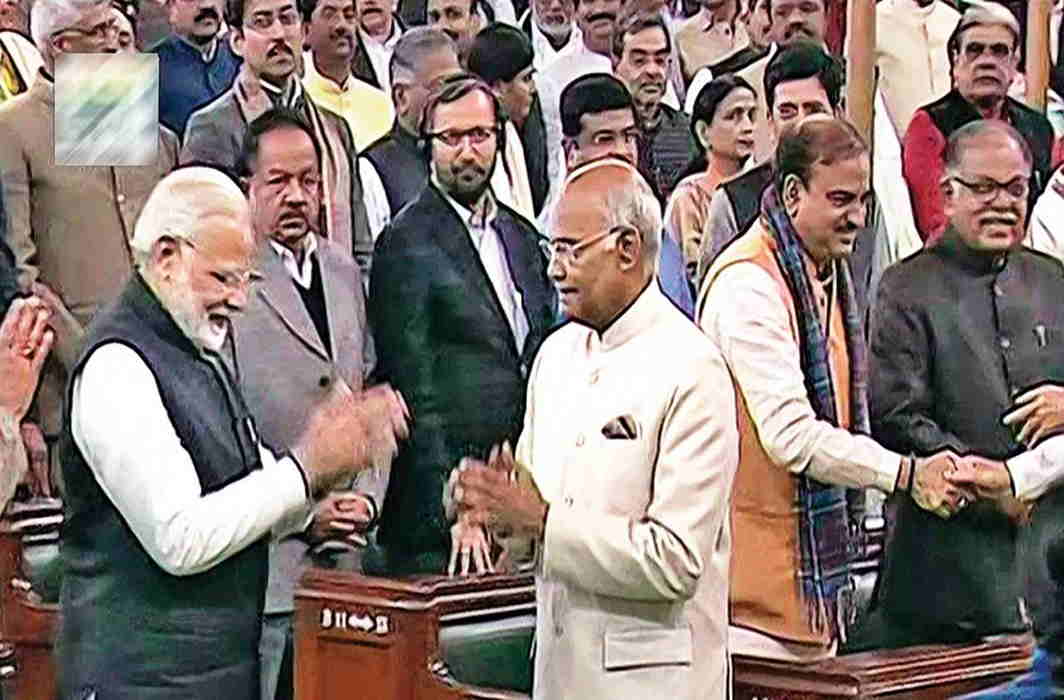 The people of India have given a mandate to continue with the country’s development journey that started in 2014, President Kovind said to the joint sitting of both houses of Parliament in the Central Hall.

More than 61 crore voters of the country “set a new record by casting their votes and enhanced the credibility of India’s democracy in the world,” he said. He said women came out in large numbers to exercise their franchise. He said a record 78 women have been elected as members of the Lok Sabha — the highest ever and almost half of the elected members are first timers.

Beginning his address, he said, “I am pleased to address the first joint sitting of Parliament after the election of the 17th Lok Sabha, in the year commemorating the 150th birth anniversary of Mahatma Gandhi. I extend my heartiest congratulations to all newly elected Members of this Lok Sabha.”

In his address, he touched on various issues including economy, illegal immigration, triple talaq, surgical strikes, terrorism and national security. He said the government is moving ahead to create a strong, secure and inclusive India.

“In this election, the people of the country gave a clear mandate. After the assessment of the government’s first tenure, the people have given it a bigger mandate this time,” he said. He said, by doing so, the people have given a mandate to accelerate the development journey initiated in 2014. This journey, he said is inspired by the “basic spirit of ‘Sabka Saath, Sabka Vikas aur Sabka Vishwas”.

“The mandate of the election asserts that the people of the country want unhindered and fast progress. They aspire the country to move forward at a fast pace, and hence the 2019 election result gave an even higher majority to the single-largest party compared to 2014,” the President said.

“The people of India have waited for a very long time for even basic facilities to reach them, I am happy to say that my government has now made it a priority to reach out and uplift people from poverty and provide all the basic needs to live with dignity. Rural and urban India, both must progress,” he said.

“In 2022, India completes 75 years of Independence, and my government is working at a fast pace to build a New India,” the President said.

Over the coming days, the government will announce a new Industrial policy, continue efforts to simplify the Goods and Services Tax, increase seats in institutes of higher education and provide housing and health facilities to the poor, he said.

Elaborating on steps being taken in the education sector, he said, “My government is working to increase seats in higher educational institutes by 50 per cent by 2024 and will create 2 crore more seats.”

The President said a new industrial policy will be announced soon and the process to further simplify GST will continue.

President Kovind said the government will build a transport system with emphasis on speed, security and environment and will also work to make rivers like Cauvery, Periyar, Mahanadi, Narmada and Godavari pollution free.

The President also referred to the contentious issue of triple talaq and stated the government’s position.

The government is committed to women empowerment, President Kovind said. “Removing practices like triple talaq and nikah halala is essential to give equality to women,” he said. “According the highest priority to women’s security, several effective steps have been initiated with the cooperation of the States. Penalties for crimes against women have been made harsher and the new penal provisions are being strictly enforced. The ‘Beti Bachao Beti Padhao’ campaign has brought down female foeticide and improved the sex ratio in many districts of the country. My Government is committed to make women equal stakeholders in the country’s development and prosperity,” Kovind said.

For farmers, the President said that government has started a pension scheme to help farmers and small traders live a life of dignity.

In the best interests of agriculturists, President Kovind said the cabinet in its first meeting has decided to extend the benefits of Pradhan Mantri Kisan Samman Siddhi (PM-KISAN) to all the farmers across the country, regardless of the size of their landholding. Announced ahead of the Lok Sabha elections in the Interim Budget this February, the scheme provided Rs 6,000 a year in income support — to be distributed in three instalments of Rs 2,000 each every four months — to small and marginal farmers, who owned 2 hectares or less.

Large-scale investment has been made to strengthen rural India. To increase the productivity of the agriculture sector, another Rs 25 lakh crore will be invested in the coming years. In order to double the farmers’ income by 2022, the government has hiked the MSP and introduced 100 per cent FDI in food processing industries, among other initiatives. Massive work is being carried for the ‘aspirational districts’ of the country, he added

India to be $5 trillion economy

“India is now on the way to become the world’s 5th largest economy in terms of GDP. To maintain the high growth rate, reform process will continue. It is our objective to make India a 5-trillion dollar economy by 2024,” said President Kovind.

“In ‘Ease of Doing Business’, India has leap-frogged 65 positions during the past 5 years, from a ranking of 142 in 2014 to 77. Now our goal is to be among the top 50 countries of the world. With the implementation of GST, the concept of ‘One country, One tax, One market’ has become a reality. Efforts to further simplify the GST will continue,” he added.

On one nation, one poll

The President endorsed PM Narendra Modi’s initiative for ‘One Nation, One Election’, saying it was high time to implement it, as the “continuous cycle of elections affect pace of development.”

“‘One Nation – Simultaneous Elections’ is the need of the hour, which would facilitate accelerated development, thereby benefitting our countrymen. With such a system in place, all political parties, according to their respective ideologies, will be able to better utilise their energy towards development and public welfare. Therefore, I urge all Members of Parliament to seriously ponder over this,” he said.

Adding that the world today is standing with India on issues of terrorism, Kovind said, “National security is paramount for my government, surgical strike and Balakot air strike on terror camps have made India’s intentions clear. Declaration of Masood Azhar as a global terrorist is proof that the world is watching.”

India has amply demonstrated both her intent and capabilities, first through surgical strikes and then through air strikes after the Pulwama attack at terrorist hideouts across the border. In future too, all possible steps will be taken to ensure our security. Today the whole world stands with India on the issue of terrorism. Designation of Masood Azhar, responsible for dastardly terrorist attacks on our soil, as a global terrorist by United Nations, is a major testimony to this fact

New India will be sensitive and also, economically prosperous. But for this to happen, nation’s security is of utmost importance. My Govt accords top most priority to national security. Therefore, effective steps are being taken to tackle Terrorism and Naxalism.

“Illegal infiltrators pose a major threat to our internal security. My Govt has decided to implement the process of ‘National Register of Citizens’ on priority basis in areas affected by infiltration,” Kovind said.

President Kovind said our scientists are involved in the preparations for the launch of ‘Chandrayaan-2’, which will be India’s first spacecraft to reach the Moon. “We are making rapid progress towards achieving the goal of sending the first Indian in India’s own ‘Gaganyaan’ by 2022. With the successful testing of ‘Mission Shakti’ a new dimension has been added to India’s capability in space technology and security-preparedness. For this, today I once again congratulate our scientists and engineers,” he said.

The President said 26 lakh poor patients have benefited from the Ayushman Bharat scheme and 1.5 wellness centres are likely to function by 2022. “My government is giving residential, health facilities to poor as poverty can be removed only by empowering them,” he said.

The government will also provide a pension for small and marginal farmers, retailers, traders and the self-employed, which will ensure them a monthly income of Rs 3,000 after they turn senior citizens at 60, Kovind added.

President Kovind also said that the government has also increased the amount of scholarships to children of brave jawans under the National Defence Fund. “This is the first time that the children of state police personnel have been included in the scheme,” Kovind added

President Kovind said creation of the ‘Jal Shakti’ Ministry is a step towards water conservation as water crisis may deepen in the future.

To increase piped water coverage in the country and to provide the people with clean water, the government has formulated Jal Shakti Ministry. “Through this new Ministry, water conservation and management arrangements will be made more effective,” Kovind added.

Plan to take the first spot in fish production: Kovind

The government has set up a separate department for the overall development of fisheries. “Today, India ranks second in the world in fish production. We have the capacity to grab the first place,” he added.

After Pradhan Mantri Jan Dhan Yojana, the government is now planning to take the banking services to doorsteps of people. For this, India Post’s postal payment banks are playing a crucial role. Insolvency and Bankruptcy Code is among the biggest & most impactful economic reforms undertaken in the country. With coming into force of this Code, banks and other financial institutions have been able to settle directly or indirectly an amount of more than Rs 3,50,000 crore.

Campaign against corruption to continue

President Kovind said Rs. 7.3 lakh crore has been transferred to people under the direct benefit transfer scheme in the last 5 years and over Rs. 1.41 lakh crore was saved as 8 crore fake beneficiaries were weeded out. “My government will make its policy of zero tolerance towards corruption more expansive and effective,” he said.

He said: “During the last two years, 4,25,000 Company Directors have been disqualified and the registration of 3,50,000 suspicious companies has been revoked. The campaign against black money will be taken forward at a faster pace. The ‘Fugitive and Economic Offenders Act’ has proved effective in controlling fugitive economic offenders. Now we are receiving information in this regard from 146 countries, including Switzerland.”