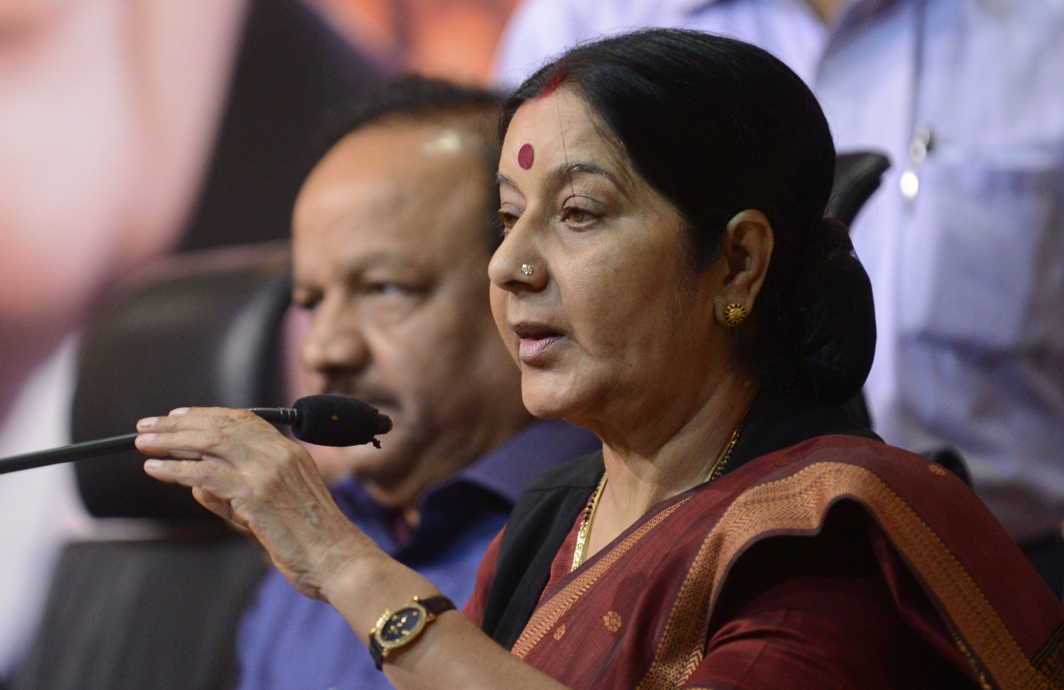 The Congress along with other opposition parties has moved a privilege motion against External Affairs Minister Sushma Swaraj in the Rajya Sabha for allegedly misleading the House over two issues — Prime Minister Narendra Modi’s Lahore visit in 2015 and the Bandung Conference in Indonesia the same year.

Leaders of different political parties have alleged that Swaraj “provided wrong information on the Bandung Asia Africa relations conference”. They added that while Swaraj claimed that she had not delivered any speech during the Bandung conference, the opposition parties have downloaded a copy of the purported speech as proof.

In a verbal duel in Rajya Sabha yesterday (Thursday) over India’s statement at the Bandung Conference, senior Congress member Anand Sharma alleged that first Prime Minister Jawaharlal Nehru’s name was omitted from the address delivered by Minister of State for External Affairs VK Singh at the meet. Pandit Nehru was one of the founder members of the Bandung Conference in 1955.

“There were two conferences,” she maintained. She said “there  were  two  Conferences – 60th Anniversary of Asia-Africa Conference, to which India was invited (to speak) but in the Bandung Conference held next day, only three Heads of States were called.” She said she was proud to see Jawaharlal Nehru’s photographs all over on hoardings but since she did not get a chance to speak, she could not take Nehru’s name.

Omitting reference to Nehru was seen as part of the current government’s alleged attempt to wipe out his legacy. The privilege notice quoted Anand Sharma to say, “Sushmaji, you and your colleagues had gone to Bandung for the 50th Anniversary. Jawaharlal Nehru was the leader and one of the architects at Bandung. What happened then? Why leaders of other countries, including that of the host country of Indonesia, remembered and recalled Jawaharlal Nehru, and your statement and India’s statement did not even refer to Nehru at Bandung? This is sad. This should not have happened. And the same thing happened at the Africa Summit! The Co-Chair along with our Prime Minister and the Heads of States of other states of Africa got up and reminded that they were free countries today because of India, because of Nehru and because of the Congress.”

The notice added, “However, while replying to the discussion, Smt Sushma Swaraj, Minister for External Affairs completely denied that any speech or statement was made by any of the representative of Indian Government at 60th Anniversary of the Bangdung Conference. It was again pointed out to her by Shri Anand Sharma that Minister of State for External Affairs, Shri VK Singh had given a speech in Bangdung on the 60th Anniversary but she completely denied stating that none of the representatives of Indian delegation were given an opportunity to give any speech… Shri Derek O Brian, MP thereafter checked and stated that speeches were made by Minister for External Affairs and MoS External Affairs on the occasion but she again denied stating that the speeches were made at some other conference a day before but not at the 60th Anniversary.”

The notice gave the links of the speeches on MEA website and enclosed copies of the speeches, saying, “We are shocked at the blatantly false and misleading statement given by the Minister for External Affairs on the floor of the House wherein the matter was discussed after giving due notice of short duration discussion which the Minister was also very keen to discuss and reply to. It is also a matter of shame that during the reply, the Minister said that Bangdung Conference is different from Asian African Conference whereas the fact is that Asian African Conference is popularly known as Bangdung Conference.”

The second issue for the motion is for allegedly “misinforming the House on PM Modi’s 2015 Lahore visit, claiming that there was no terror incident after that”. The opposition, however, said that the Pathankot terror attack happened immediately after PM Modi’s visit and there were other terror-related incidents after that too.

The privilege notice said: “Shri Anand Sharma had specifically raised the issue that Prime Minister had visited Pakistan while returning from Afaganistan on an unscheduled visit to wish Mr Nawaz Sharif on his birthday on 25th December 2015 but in response to which India was greeted by one of the worst terrorist attack on its air force base in Pathankot immediately thereafter on 2nd January 2016.”

However, the notice said, while replying to the discussion, Swaraj, stated that “India was having very cordial relations with Pakistan and was engaged in peace talks with Pakistan since the formation of NDA government till the encounter of Burhan Wani (which happened on 8th July 2016) after which Pakistan PM Shri Nawaz Sharif declared him to be a freedom fighter and then the relations deteriorated.”

The notice said the statement was “totally false”. It said, “..immediately after PM’s visit to Lahore on 25th December 2015, Pathankot Air Force base was attacked by Pakistan based terrorists on 2nd January 2016. There were increase in terrorist violence especially against the security forces immediately thereafter.” It gave a table containing list of major incidents of terrorist violence in J&K from January 2016 to August 2016.

The notice alleged that the “Minister for External Affairs has misled the House by giving a false statement on the floor of the House that the relations with Pakistan were improving till Burhan Wani was killed.”