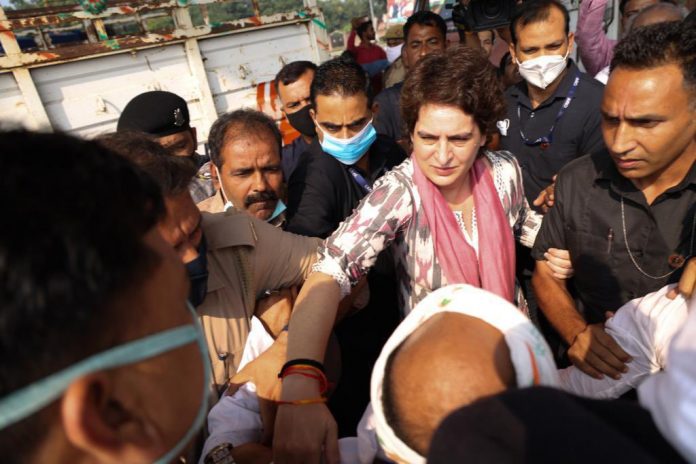 Congress leader Priyanka Gandhi Vadra was stopped by UP Police at the Lucknow-Agra Expressway, while she was going to meet the family of Arun Kumar (Dalit), who died in police custody. She has been taken to Police-lines in Lucknow.

According to Police, the Congress leader was not permitted to meet the family of the deceased. Police have also imposed Section-144 in the area.  The Police said, they are just following the order of the Agra district magistrate, who ordered not to allow any political personality to go there following the Dalit man’s death.

This is not the first time that Priyanka has been held by UP Police, earlier this month she was detained by UP Police when she was on her way to visit the families killed in the Lakhimpur Kheri violence.

Priyanka after her arrest tweeted that, Arun Valmiki died in police custody and his family is demanding justice that she wants to visit the family to console them, but seems like UP government is scared. She also took a dig on PM Modi and asked for fair justice for the Valmiki family.

While interacting with media, she said whenever she tries to visit any place other than Congress Party office the police try to stop her, which also causes public inconvenience. Priyanka said that she doesn’t understand what is UP government trying to prove by stopping her from visiting the family of deceased.

“They say I cannot go to Agra. They stop me wherever I go. Should I keep sitting in restaurants because it is politically convenient for them? I want to meet them, what is the big deal?,” said Priyanka.

Who was Arun Valmiki?

Arun Valmiki, a sanitation worker, who belonged to Valmiki (Dalit) community was allegedly accused of stealing Rs 25 lakhs from the warehouse of the police station on Saturday night. As per police, Arun admitted the crime and they have also recovered Rs 15 lakhs during the raid from his house. The police say that Arun suddenly fell ill and died.

However, the police said that appropriate action will be taken after the post-mortem report arrives.