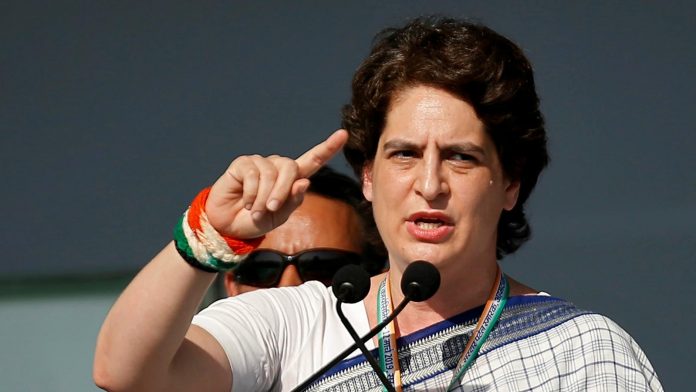 Congress leader Priyanka Gandhi on Saturday accused Prime Minister Narendra Modi over his Covid handling, alleging that Indians do not come first for the PM, politics does and that truth does not concern him but propaganda does.

Taking to the social media, she said PM Modi simply retreated and waited for the worst to pass. He has behaved like a coward and has let the country down. She also claimed that the prime minister’s vast capacity for vanity has been exposed and the whole world has witnessed the prime minister’s incompetence at governance during the pandemic.

Gandhi launched a series of attacks against the government over its Covid second wave handling and her harsh criticism of PM Modi was a part of her Zimmedaar Kaun? campaign where she said that during the crisis PM Modi’s incompetence at governance was on display.

In her statement, Gandhi alleged that the time has come for the people to ask the prime minister ‘Zimmedaar Kaun

Gandhi also said that PM Modi concentrated on building image when he decided to export vaccines to other countries and did not bother to think about his own countrymen. She also said that the vaccine registration platform is convoluted and designed to slow down the vaccination process in her statement.

Hitting out at the Centre’s poor vaccination strategy, she said the government exported millions of doses of life-saving drugs without ensuring provisions for Indian lives first. Instead of distributing free vaccines across the world to boost his own image, had he paused for a moment and protected his countrymen first, the people would not be standing in line today grappling with a convoluted registration system designed to slow down the vaccine process, she said.

She also slammed PM Modi for not taking opponents along in this battle for Indian lives, saying he could have engaged with experts, critics, allies and the opposition fearlessly. She said he could have used the media as a disseminator of life-saving information about Covid, rather than as a propaganda tool to promote his own image.

Priyanka Gandhi also listed a series of measures that the prime minister should have taken in the wake of Covid spread.

Priyanka Gandhi, Rahul Gandhi and Sonia Gandhi along with other senior leaders, including former Prime Minister Manmohan Singh, have been very critical of the government’s Covid handling, especially when cases and deaths rose during the second wave.

Manmohan Singh and Sonia Gandhi on separate occasions have also written to the Prime Minister providing suggestions and urging him to implement those. In response, the BJP has accused the Congress for politicising the pandemic and using it as a tool to malign the image of Prime Minister Narendra Modi.

Bangladesh beat Papua New Guinea by 84 runs to qualify for super-12 of T20 World Cup 2021. With this win Bangladesh moved to the top of table in qualifying group B. Star all-rounder Shakib Al Hasan stole the show with his all-round performance.
Read more
Load more