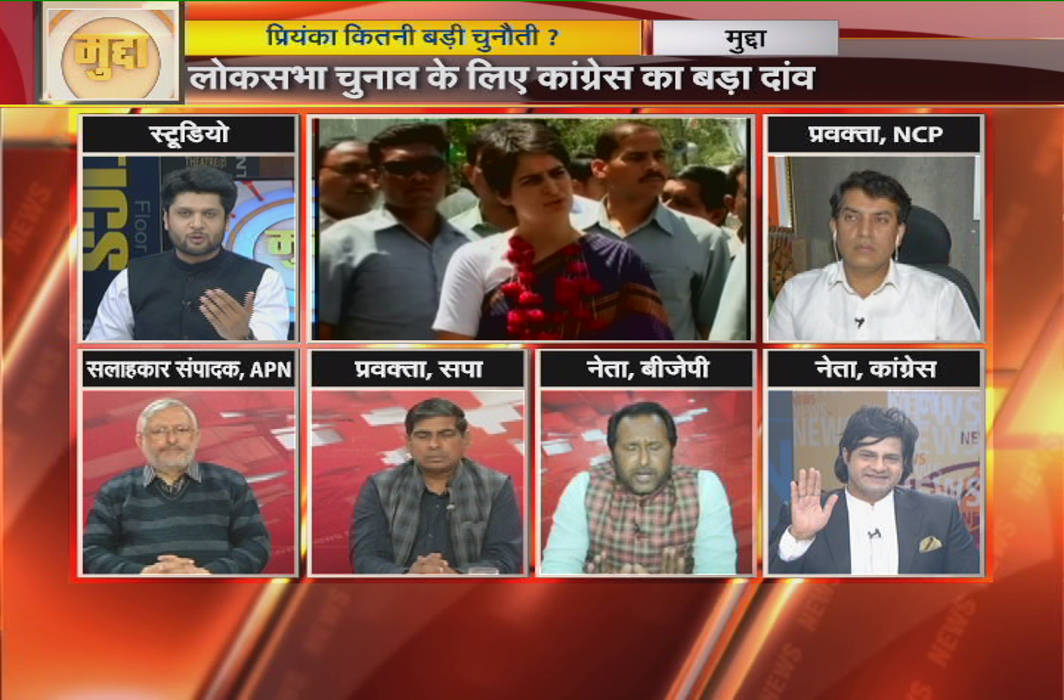 Priyanka Gandhi’s entering into active politics ahead of polls is being criticized by opposition parties ever since the Congress President Rahul Gandhi declared her party general secretary for UP (east).

Now, the poster featuring Priyanka Gandhi, Rahul Gandhi and Robert Vadra was removed, which was seen outside the Congress party headquarters in Delhi yesterday.

It arises many questions in mind such as why the poster was removed. And how Congress party is seeing the situation? In order to get the answers of all such questions APN in its popular show Mudda, has chosen this issue for discussion with anchorperson Anant Tyagi along with Congress leader Saif Khan, Samajwadi spokesperson Abdul Hafiz Gandhi, BJP leader Tilak Raj, NCP spokesperson Mahesh Chouhan and APN consultant Govindpant Raju.

Saif Khan was the first to speak and said “I would like to mention that Robert Vadra runs so many businesses and his property issue will not affect the party.”

He also added that “BJP has problem with everything they criticizes everything, be it Priyanka Gandhi entering in to active politics or it Robert Vadra’s property issue.”

Hafiz said “Everyone has the right to strengthen its party be it Congress or any other party and we have already welcomed Priyanka Gandhi ji in UP politics and our alliance with BSP is also doing well.”

Saif Khan said “BJP failed to fulfill its promise at the centre and is not even doing well at state level and not looking towards serious issues which needs governments’ concern in UP.”

Hafiz said “BJP tried to protect the rape accused Kuldeep Sengar, just because he belongs to their party and people have realized their propaganda and will vote accordingly.”

Tilak Raj said “You Congress party just know how to oppose and cannot see what work has BJP done in four-and-a-half years, but people know it.”

Mahesh Chouhan said “If BJP was doing that much work for the people then why didn’t the people vote them in power in MP, Rajasthan and Chhattisgarh, they just make fake promises and failed in fulfilling those promises.”

Govind Pant Raju said “Comparing Priyanka Gandhi with Indira Gandhi is not fair at all, that was a different time and people then and now have changed.”

He also added that “Priyanka Gandhi’s presence will definitely benefit Congress party in UP, but if one feels that her presence can create any kind of magic then they may be wrong as one must know that to create miracle one must work hard up to the level.”

Hafiz said “Congress party is not that much strong in UP as SP and BSP.”

Mahesh Chouhan said “Congress had earlier said that Priyanka Gandhi is not entering the UP politics for polls but for long term, and her presence will benefit the party.”

In an overall discussion it has come to knowledge that panelists feels that Priyanka Gandhi’s presence in active politics will benefit Congress, but if they think that just because of her presence they can create wonders, then they may be wrong.