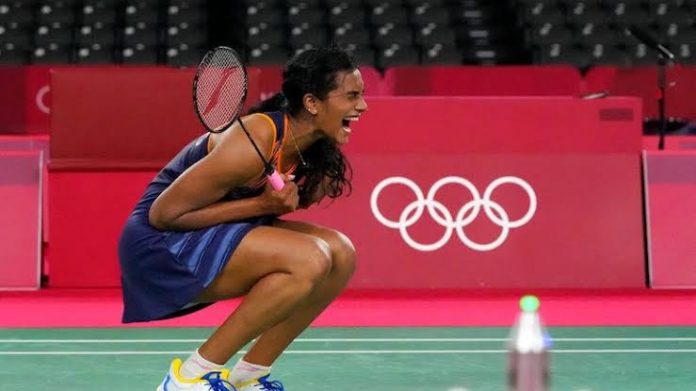 World Champion Shuttler PV Sindhu on Sunday defeated He Bingjiao of China by 21-13, 21-15 in women’s singles and bagged bronze medal in Tokyo Olympics. The 26-year-old has become the first Indian woman to bag multiple medals at Olympics. She had won silver medal in 2016 Olympics in Rio.

Tai Tzu-ying of Chinese Taipei, who defeated Sindhu in the semifinal, will face another Chinese Chen Yufei in the final now.

The 26-year-old Indian shuttler could not pose a challenge to the Taiwanese shuttler in Saturday’s match. Tai beat Sindhu 21-18, 21-12 in two straight games. Sindhu had entered the semis by defeating Akane Yamaguchi of Japan by 21-13, 22-20.

So far, before Sindhu, weightlifter Mirabai Chanu had won India’s first medal at the Tokyo Games. She had clinched the silver medal, the first for India in weightlifting, with a total lift of 202kg (87kg snatch and 115kg in clean and jerk).

India is currently 53rd on the medal tally with just a silver medal under its belt in spite of sending 128 athletes to the event. China is leading the table with Japan and the United States following it.