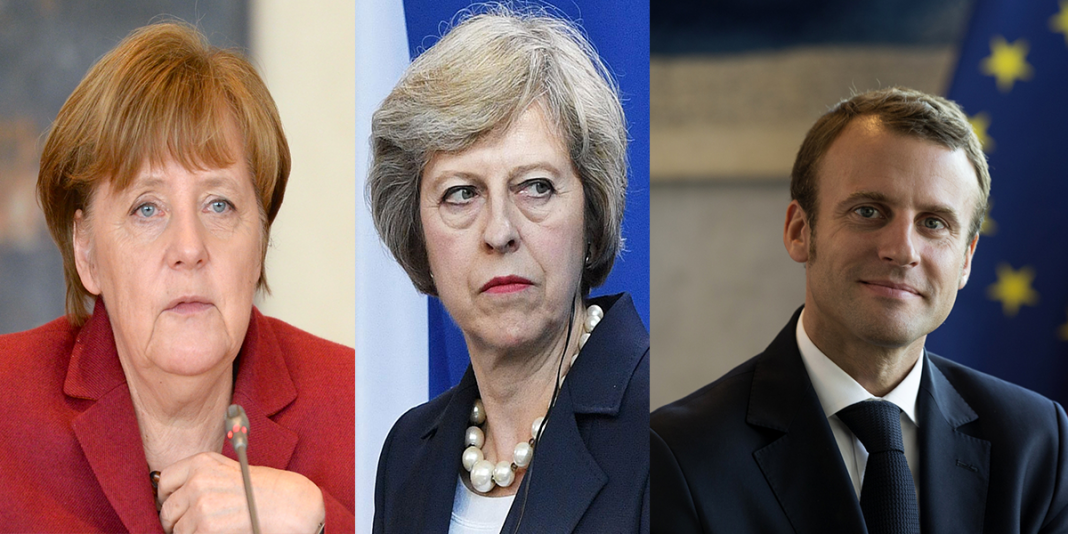 Leaders of major European countries have urged both sides of the diplomatic standoff, Qatar and rival Saudi Arabia led bloc of countries, to resolve the present crisis peacefully. Meanwhile Qatar’s Foreign Minister has delivered Doha’s response to the 13-point demands to Kuwait’s Emir who is mediating with US support.

France, UK and Germany came forward to engage in the de-escalation process. According to Al-Jazeera, which would be closed if Saudi led bloc’s conditions were met, French President Emmanuel Macron spoke to Qatar’s emir Sheikh Tamim bin- Hamad Al-Thani about the latest developments in the crisis.

Qatar News Agency (QNA) reports that Macron and emir “stressed the need to resolve this crisis through dialogue and diplomatic means”.

British Prime Minister Theresa May has reportedly spoken to Saudi Crown Prince Mohammed bin Salman. According to a statement issued by May’s office in London, PM has urged all sides to “take urgent steps to de-escalate the situation and restore Gulf Cooperation unity”. The statement reiterated that “UK remains committed to supporting” the process towards finding a solution.

Meanwhile German Foreign Minister Sigmar Gabriel visited Kingdom of Saudi Arabia on Monday. While addressing a joint press conference with the visiting dignitary in Jeddah, Saudi Arabia’s Foreign Minister Adel al Jubeir said, “We hope for a positive response to be able to resolve the crisis.” Both the leaders stressed the need to resolve the crisis through dialogue and diplomatic means.

On Monday, Qatar’s Foreign Minister Mohammed bin Abdulrahman Al Thani arrived in Kuwait and handed over a letter from Qatar’s Emir to his Kuwaiti counterpart Sabah al-Ahmad Al-Jaber Al-Sabah. This is considered to be the official Qatari response to the 13 point demands put forwarded by Saudi led block of countries. The contents of the letter were still not made public.

According to reports Qatari foreign Minister and his Kuwaiti counterpart held extensive discussion for more than 90 minutes. After that Qatari Foreign Minister headed to the residence of Kuwait’s Emir.

The Qatar’s response will be the focus of the Foreign Ministers of Saudi Arabia, Egypt, UAE and Bahrain in Cairo on Wednesday. Kuwait’s Foreign Minister will also be present during the meeting.

The Saudi led group of countries severed diplomatic ties, cut land and air links with Qatar and imposed sanctions on it on June 5. They accused Doha of supporting “terrorism” which was rejected by Qatar.

After two weeks, they put forwarded 13 point demands for Qatar which included severing ties with their arch rival Iran, closing Turkish military base in its territory, stop naturalizing their internal opponents in that country. Qatar was also asked to align its political, economic and cultural policies with other GCC countries.