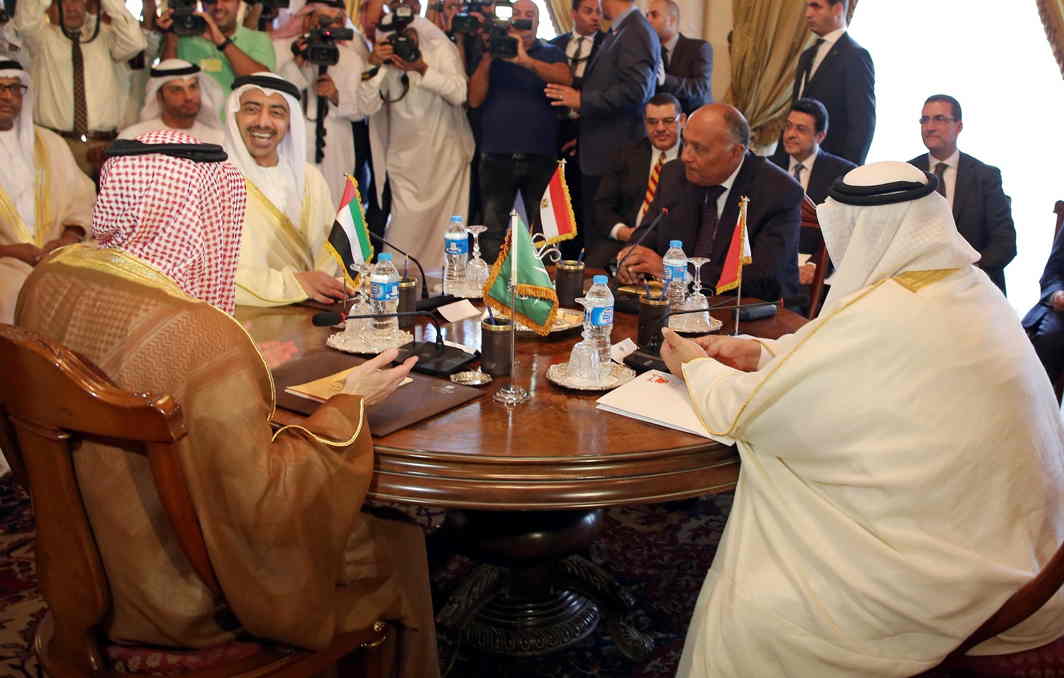 A senior Qatari official has claimed that the “Saudi Arabia led quartet of boycotters” have failed to bring his country to its knees and reminded that “smear campaign” against his country is only reminiscent of Saudi Arabia’s own ideological support for terror groups.

On June 5, Saudi Arabia, UAE, Bahrain and Egypt, had jointly announced severing of diplomatic, business and travel ties with Qatar and also appealed to other “brethren countries” to follow. The Gulf Cooperation Council (GCC) is virtually broken after the severe diplomatic move. Kuwait and Oman did not chose to cut ties with Doha. US have been supporting Kuwait’s mediation efforts.

The GCC, consisting of Saudi Arabia, UAE, Bahrain, Qatar, Oman and Kuwait, was established in 1981 for supporting Saddam Hussein of Iraq in war against Iran.

In the latest move, Mutlaq Majed al-Qahtani, the special envoy of Qatari Foreign Minister has written an opinion piece “Qatar Will Not Be Intimidated.”  Published by New York based Wall Street Journal on Monday, the opinion piece derided “Saudi and Emirati hypocrisy”.

The 473 word Al-Qahtani’ opinion piece was sharply worded mainly hitting Saudi Arabia and UAE. He said that “Instead, the anti-Qatar smear campaign has put a spotlight on the shameful history and unsavory practices of the Saudis and Emiratis themselves.”

Al-Qahtani reminded that Saudi Arabia justifies the blockade by alleging that Qatari authorities “support extremists and terrorist organizations”. But the accusation only reminds observers that the Saudis have consistently failed to prevent the radicalization of their citizens.

While elaborating Saudi’s role in spreading terrorism and its sinful support to the worldwide menace, the Qatari diplomat said “Fifteen of the 19 hijackers in the 9/11 attacks were Saudis. Thousands of Saudi citizens have taken up arms to join Islamic State (IS) and other radical groups.

He also alleged that “Saudi textbooks are used in ISIS schools. Many of the five dozen groups that the US State Department designates as terror organizations are funded by Saudi nationals.”

The Qatari diplomat, who is responsible for country’s counter terrorism and mediation efforts, further alleged that “Emirates have taken a similarly hypocritical stance. While the UAE falsely portrays itself as America’s best ally in the region, its track record is no better than Saudi Arabia’s. Two Emiratis participated in the September 11 hijackings, and the staff report to the 9/11 Commission revealed that much of the funding for the attacks flowed through the UAE, which was a world hub for money laundering.”

The Qatari diplomat detailed about the worst freedom of speech situation in UAE. He said, “The UAE has fared no better with regard to freedom of speech and press. In 2014, authorities arrested a man for plotting a terrorist attack on a Formula One race track in Abu Dhabi. But the Emirates prohibited international media outlets from reporting on the trial. The UAE’s recent clampdown on free speech has been widely condemned, especially after the country’s Justice Ministry said in June that supporting Qatar on social media could be punishable by fines and even prison time.”

Al-Qahtani concluded by saying that “leaked emails show that Emirati officials were conspiring with a variety of interest groups and lobbyists to slander Qatar long before the blockade was imposed. Now, intelligence experts and Qatar’s cyber security services have identified the UAE as the perpetrator of the hacking of Qatar News Agency, which set the entire Gulf crisis in motion.

In late May, hackers had allegedly broke into Qatar News Agency (QNA) and published a fake story quoting Emir Tamim bin Hamad Al-Thani calling Iran an “Islamic power” and saying Qatar’s relations with Israel were “good”. However, Qatar had announced that the news website was hacked.

On Tuesday, responding to Qatari diplomat’s opinion piece, Anwar Gargash, the UAE Foreign Minister called Qatar an “arrogant” state.  In his twitter post he wrote, “It is the country’s arrogant position to accuse the United Arab Emirates’ of leading the campaign against it and of opening fronts, including with Saudi Arabia, and at the same time to think that undermining the security of Bahrain and Egypt is a natural right. This is the logic of illogical.”

Meanwhile Sheikh Mohammed Abdurrahman Al-Thani, the Qatari Foreign Minister said on Tuesday that it will take a “lot of time” to rebuild any trust between the GCC members because of the region’s continuing diplomatic crisis.  “Qatar has always been one of the founders of the GCC organization and we still consider that this has a great importance for all of us in the region,” he said.

The Saudi led quartet severed ties with Qatar alleging Doha for supporting terrorist groups: Muslim Brotherhood in Egypt and Hamas of Palestine. Later these countries put forwarded thirteen-point demands to Qatar, saying that Doha should sever its ties with Tehran, close new Turkish army base in its territory and shut down Aljazeera network.