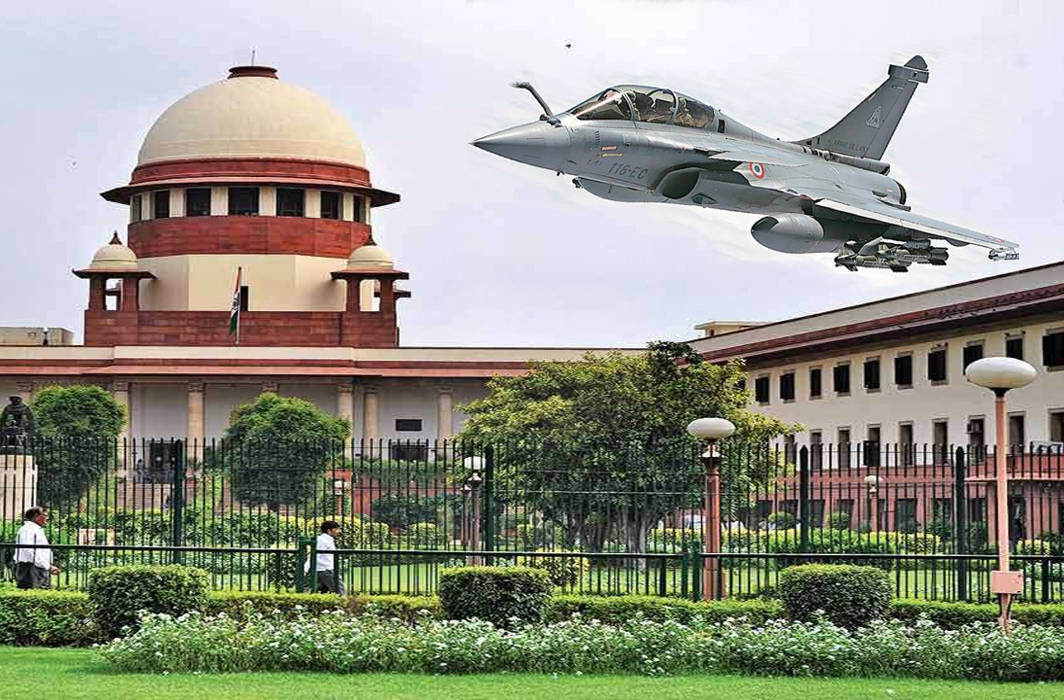 The Centre today (Wednesday, March 13) told the Supreme Court that documents, attached in the petitions to review its Dec 14 verdict rejecting a probe in Rafale deal, are sensitive to national security and their leakage by photocopying amounts to theft and puts national security in jeopardy.

The court will continue the hearing on Thursday.

In an affidavit filed in the apex court, the Ministry of Defence (MoD) asked the court to reject the review plea and said that the petitioners including former union ministers Yashwant Sinha and Arun Shourie are guilty of leaking sensitive information.

“Those who’ve conspired in this leakage are guilty of penal offences including theft by unauthorized photocopying and leakage of sensitive official documents affecting national security. These matters are now subject of an internal inquiry which commenced on Feb 28,” the government told the court.

In the affidavit, the government said the review plea has been widely circulated and is available to the country’s enemy and adversaries. It said that the documents attached by the petitioners in the Rafale review case relate to war capacity of the combat aircraft.

“This puts the national security in jeopardy. Without consent, permission or acquiescence of the Central Government, those who have conspired in making the photocopy of these sensitive documents and annexing it to the review petition/ miscellaneous application and thereby committing theft by unauthorized photocopying of such documents…have adversely affected the sovereignty, security and friendly relations with the foreign countries,” the affidavit said.

It said that even though the Centre “maintains secrecy”, the review petitioners are “guilty of leakage of sensitive information, which offends the terms of the agreements.”

“The petitioners are using unauthorisedly accessed documents with the intention to present a selective and incomplete picture of internal secret deliberations on a matter relating to National Security and Defence,” the affidavit said.

The Supreme Court is hearing a bunch of petitions seek review of its December 14 verdict which had dismissed demands for a court monitored CBI investigation into irregularities in negotiating the Rafale fighter jet deal with the French government and Dassault Aviation.

As the three-judge bench of CJI Ranjan Gogoi and Justices Sanjay Kishan Kaul and KM Joseph, which had delivered the December 14 judgment, began hearing the review petitions, on Wednesday (March 6), counsel for former Union finance minister Yashwant Sinha, the most high profile petitioner in the case, urged the court to rap the Centre for perjury.

Stating that the December 14 verdict did not go into their prayer for a court-monitored investigation into the Rafale deal but looked at prayers made by other petitioners – advocates ML Sharma and Vineet Dhanda – for cancellation of the deal, the counsel for Sinha argued that the real question before the court is whether their complaint warranted a probe.

Placing reliance on a set of documents related to the Rafale deal and the negotiations between the Indian and French sides that preceded it but which came in the public domain after the December 14 verdict, Sinha’s counsel said the apex court had relied upon “a large number of serious errors of fact” while dismissing the prayer for a probe into the deal.

“Those facts were presumably supplied to the court by the Centre in sealed cover notes…Critical material facts were suppressed from the court… the government should be hauled up for perjury,” Sinha’s counsel said.

The Centre had vociferously opposed the review petitions and asked the SC to dismiss them as they were based on documents “stolen” from the ministry of defence. “It’s a criminal act on the part of petitioners to bring these documents with them. They have come with unclean hands,” Attorney General (AG) KK Venugopal had said.

However, turn two days later the AG said the documents were not stolen, but the petitioners were using “photocopies of the original” papers.

Venugopal had informed the Chief Justice Ranjan Gogoi-led bench on March 6 that documents cited by The Hindu newspaper in its reports on the controversial Rafale deal were stolen and cannot be shown in court as it would affect national security. The government had also warned The Hindu with a case under Official Secrets Act for publishing articles based on these documents.