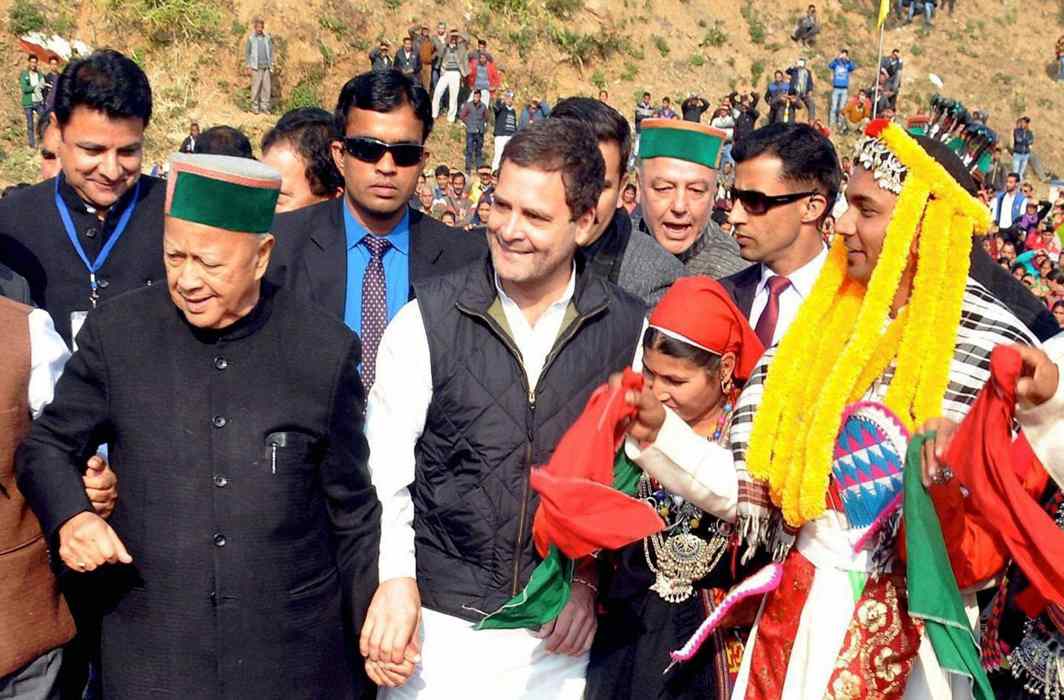 Putting to rest all speculations over who will be the party’s chief ministerial candidate in the upcoming Himachal Pradesh assembly elections, Congress vice president Rahul Gandhi, on Saturday, endorsed incumbent Virbhadra Singh to lead the party’s campaign.

If Virbhadra, who is facing stiff oppositions from within the Congress’ ranks – mostly from confidantes of the Congress vice president – manages to lead the grand old party to victory, he will be appointed chief minister for a record seventh term. The aging Congress veteran had recently indicated that he will not contest the elections due later this year, signaling his anger at the party leadership’s nervousness over projecting him as the face of its campaign.

Rahul, who launched the Congress’ poll campaign for Himachal – one of the few states in the country where the party has lost power to the BJP – on Saturday at a massive rally in the state’s Mandi district made it clear that he was ditching his confidantes – former Union minister Anand Sharma and state Congress president Sukhwinder Sukhu in favour of Virbhadra.

“Virbhadra Singh ji has done tremendous development in Himachal Pradesh as six-time chief minister. He will be CM for seventh time. This will have full backing of the party” Rahul said while addressing the rally in Mandi.

Rahul added that the people of Himachal should compare the five years of Virbhadra’s government with the BJP government in Gujarat for the same period. Rahul’s rally comes close on the heels of Prime Minister Narendra Modi’s recent rally in the state’s Bilaspur district where BJP made its pitch for the upcoming polls.

Rahul’s endorsement of Virbhadra as the party’s chief ministerial candidate comes in the backdrop of intense infighting in the party.

The Congress vice president Rahul Gandhi knows well that though Anand Sharma and Sukhu may be his close aides, neither of them know Himachal Pradesh, its people and politics as well as the 83-year-old Virbhadra, the erstwhile ruler of the Rampur-Bushahr principality in north Himachal.

The BJP, which has several prominent faces in the states including Union health minister JP Nadda, former chief minister Prem Kumar Dhumal and his son Anurag Thakur, has been hoping that the factional feuds within the Congress and its campaign against the alleged corruption of the Virbhadra government will help it form a government in this northern hill state.

Although Virbhadra is the Congress’ best bet to lead the campaign in Himachal, the veteran warhorse who has never lost an election – having been elected to the state assembly seven times and to the Lok Sabha for five terms – could also be the party’s biggest liability.

The CBI is pursuing a case of disproportionate assets against Virbhadra, his wife and former MP Pratibha Singh, their son Vikramaditya and daughter Aparajita. The cases, which Virbhadra has maintained are “politically motivated and filed at the behest of the BJP leadership”, will certainly be used by his opponents – both within the Congress and those from the opposition – as ammunition against him during the polls.

However, it seems that despite the obvious challenge and even the possibility that the CBI and the courts could crackdown against Virbhadra in the run up to the assembly polls giving a clear advantage to the BJP, Rahul has chosen to place his party’s fate in the hands of the octogenarian. In a larger perspective, this decision possibly is also indicative of Rahul’s willingness to make peace and promote the party’s old guard even at the cost of his own loyalists – something that senior leaders of the Congress have been hoping for with the impending elevation of the Nehru-Gandhi scion as the party chief- possibly within this month itself.