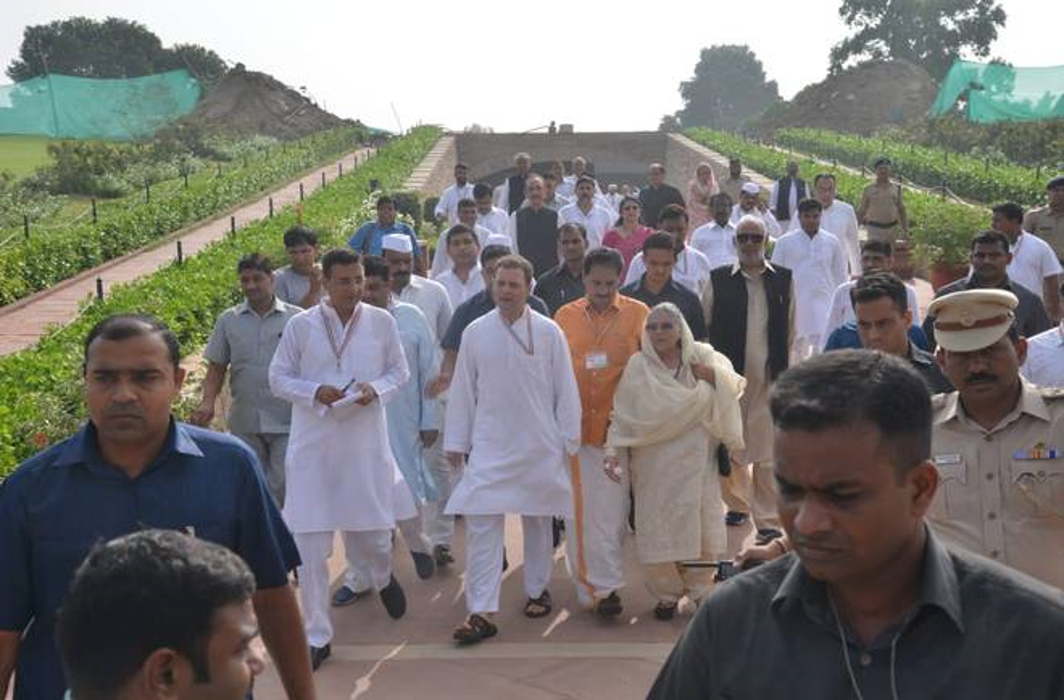 Congress President Rahul Gandhi has led the kick start of the opposition sponsored “Bharat Bandh” at Mahatma Gandhi’s memorial Rajghat in the capital on Monday to protest against the rise in fuel prices and depreciation of the rupee against US dollar.

At least 21 opposition parties are participating in the nationwide shutdown. Delhi’s ruling Aam Aadmi Party (AAP), which had refused to join the bandh, also sent its leader Sanjay Singh.

Top opposition leaders present at Raghat were: Sonia Gandhi, former PM Dr. Manmohan Singh, Sharad Pawar and MK Stalin. Left leaders have supported the day long shut down, while Mamata Banerjee’s Trinamool Congress has decided to stay away. The effect of the bandh is expected to be strong in states like Kerala, Karnataka and West Bengal.

This is Rahul Gandhi’s first public appearance after he returned from Kailash Mansarovar Yatra. Dr. Manmohan Singh, while participating in the protest said, “The (Narendra) Modi government has done a number of things that were not in the interest of the nation. The time to change this government will come soon.”

Randeep Surjewala, the spokesperson of Congress party said, “We demand that petrol and diesel be brought under the ambit of the GST. High prices of petrol and diesel found no mention in the BJP’s national executive meeting because they are not bothered about the pain of public.”

Schools and colleges were closed in Bengaluru on Monday  after Karnataka’s ruling Janata Dal Secular, which is in alliance with the Congress, said it would support the day-long protest. Schools in Odisha too are closed, though Chief Minister Naveen Patnaik’s party has refused to back the shutdown.

Reports indicate that train and road traffic were affected in many parts of Bihar. Over a dozen long route trains had to stop  at Patna, Gaya, Bhojpur, Jehanabad, Bhagalpur and Muzaffarpur railway stations.

The Congress said it had urged party workers not to indulge in any violent protest. Ajay Maken, party’s Delhi unit president said, “I appeal to all Congress workers to make the bandh violence-free. We are Mahatma Gandhi’s party and we should not associate ourselves with any violence.”

The ruling Trinamool Congress in West Bengal has expressed support on the issues on which the shut down has been called, but said it was against any kind of strike in the state according to their stated policy.

In Tamil Nadu, DMK leader MK Stalin said the centre is not doing anything to halt the rupee’s slide against the dollar or to control the fuel prices.

On Sunday, the prices of Petrol and diesel set new records. Petrol price was raised by 12 paise a litre and diesel by Rs. 10 paise per litre.  Hours before the opposition-backed shutdown, the BJP government in Rajasthan announced tax cuts on petrol and diesel leading to prices falling by Rs. 2 per litre.

Heavy security arrangements were in place in Maharashtra, a BJP-ruled state, where the opposition Congress and the Nationalist Congress Party (NCP) of Sharad Pawar are participating in the protest.