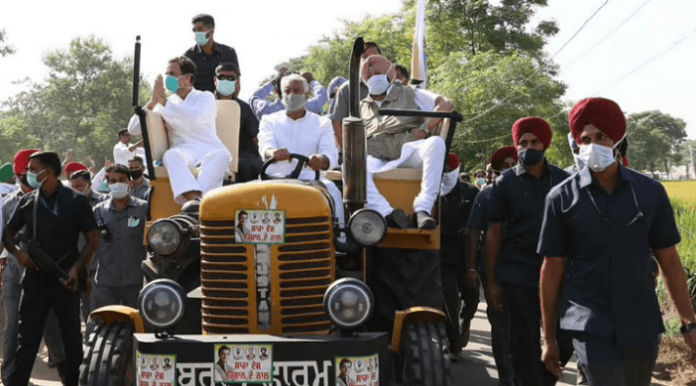 Former Congress president Rahul Gandhi hit out at the Narendra Modi government and promised farmers in Punjab that the Congress would remove the farm laws once it comes to power at the Centre. He said the government had passed 3 black legislations in haste amid the Covid-19 pandemic. When 1,000 mandis shut forever, where would labourers working in these mandis go, he added.

Gandhi addressed several tractor rallies under the banner of the Kheti Bachao Yatra in Sangrur, Patiala and other parts of Punjab, along with Haryana and Delhi on Monday.

He called the Minimum Support Price, food procurement and wholesale markets as three pillars of the country. He said Prime Minister Narendra Modi wanted to destroy this system but Congress won’t let them destroy farmers.

Punjab Chief Minister Captain Amarinder Singh said Parliament may have passed the bill and after presidential assent, it was now the law of the land but who said an amendment can’t be done to fix it. When we get majority in Lok Sabha and come to power, Rahul Gandhi would revoke these laws, he said.

The Haryana government has said Rahul Gandhi can bring in a few people, but it would not allow a big crowd from Punjab for tractor rally, which could disturb the atmosphere. Haryana Chief Minister Manohar Lal Khattar slammed the Congress protest and accused the Congress party’s tractor protest of misleading farmers.

He said farmers know that Congress was misleading them. The Congress tried to mislead the country on issues like CAA, Ram temple but soon things will be clear and this issue will also die down soon, he said.

Haryana’s Deputy Chief Minister Dushyant Chautala, who is under increasing pressure to quit the state government over the farm laws, attacked Rahul Gandhi, saying he lacked basic knowledge of farmers’ issues. It would be tough for Gandhi to point out the basic provisions of the newly-passed legislations, he said.