Rahul Gandhi, Priyanka Gandhi back in Delhi after UP Police block Hathras trip 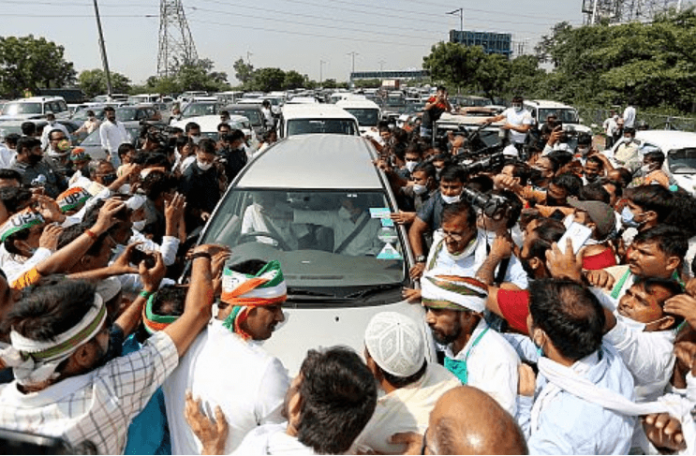 Former Congress president Rahul Gandhi and party general secretary Priyanka Gandhi Vadra were released from detention by Uttar Pradesh Police a few hours after they were prevented from moving to Hathras to meet the family of the Dalit rape victim.

The Gandhis were prevented from driving down Yamuna Expressway beyond Pari Chowk in Greater Noida. They then walked down the highway.  The Congress leaders sat on the road with supporters after the police refused to let them continue.

There was high drama as well. Photos and videos showed Rahul Gandhi falling down as the police pushed him. Ahead of the Gandhis’ visit, the UP administration enforced a ban on large gatherings and put up barricades citing the Covid-19 pandemic. The police also imposed Section 144 of the Criminal Procedure Code in Hathras, and sealed the borders of the district. A Special Investigation Team (SIT) will meet the deceased woman’s family on Thursday, and media would not be allowed.

Congress MP Shashi Tharoor criticised the media for its coverage of the Gandhis’ march said that some media terms opposition presence as politicisation. Tharoor said the Opposition’s role was to stand up for the victims of a government which lets lawlessness run rife, denies any form of justice to the family and tries to cremate the truth.

The 19-year-old gangrape victim from Hathras died on Tuesday at Delhi’s Safdarjung hospital. She had suffered multiple fractures, was paralysed and had been left struggling to breathe by a neck injury when she was assaulted by four upper-caste men from her village on September 14.

On Thursday, a senior UP Police officer claimed the woman was not raped citing a forensic report which didn’t find evidence of such nature. But the police’s hurry in getting the remains of the victim cremated has added fuel to the outrage.

Facebook
Twitter
Pinterest
WhatsApp
Previous articleRahul Gandhi, Priyanka Gandhi hit the road, Rahul wrestled down by UP Police on march to Hathras
Next articleEight Facts of Mahatma Gandhi That Are Known Least To Us