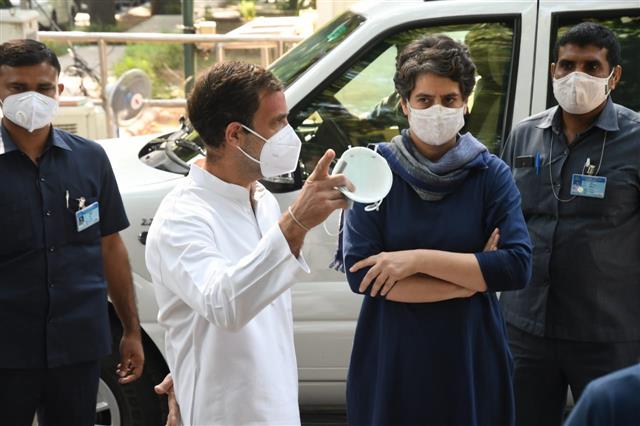 Congress MP Rahul Gandhi, party UP general secretary Priyanka Gandhi Vadra have been allowed to travel to Uttar Pradesh’s Hathras district and meet the family of the 19-year-old Dalit woman, who was gang-raped and murdered last month by four upper caste men and whose body was then cremated in the dead of night.

This is the second attempt of the Gandhis to visit the grieving family after they were stopped from going there earlier this week.

On Thursday,  the Gandhis were stopped in UP’s Greater Noida and were taken into custody albeit briefly. Rahul was manhandled and pushed to the ground by policemen in the tussle, prompting indignation at the UP government’s handling of opposition leaders.

Visuals shared online showed a massive police presence at the Delhi-Noida toll plaza, leading many to question where the police were when needed to deal with crimes against women in the state. Congress leaders claimed the police had been given definite instructions not to allow Congress leaders to cross the border.

Rahul Gandhi tweeted that no power in the world can stop him from meeting the grieving family and sharing their pain.

A delegation of 30 Congress MPs including Shashi Tharoor and led by Rahul and Priyanka Gandhi set out from Delhi at around 2.30 pm.

Meanwhile, Hathras Joint Magistrate Prem Prakash Meena told news agency ANI that Rahul Gandhi will not be allowed to visit Hathras and currently the arrival of any political leader is banned. When orders come to allow delegations, they will let everybody know, he added.

Smriti Irani was gheraoed by some Congress workers in Varanasi this afternoon soon after she accused Gandhi of playing politics over the Hathras case.

While addressing a press conference in Varanasi, Irani said people are aware of Congress tactics, that is why they ensured a historic win for BJP in 2019 polls. People understand that their visit to Hathras is for their politics and not for justice to the victim, she added.

Irani, who defeated Rahul Gandhi in the Congress’s stronghold Amethi last year in Lok Sabha elections, said she has spoken to UP CM Yogi Adityanath regarding the Hathras case and he had assured her that strict action would be against those dared to deprive the victim of justice.

Hitting back at the Union Minister, Congress spokesman Randeep Singh Surjewala tweeted in Hindi that when will Irani go to Yogi Adityanath with bangles. He was referring to the BJP leader sending bangles to former PM Manmohan Singh in 2013 while protesting against his government.

The 19-year-old Dalit woman had suffered multiple injuries in her cervical spine that had left her paralysed and her tongue been slashed.