The alliance of DMK and Congress won 38 of 39 seats In the 2019 Lok Sabha polls while in the 2016 state election the Congress managed to win eight seats out of 41. 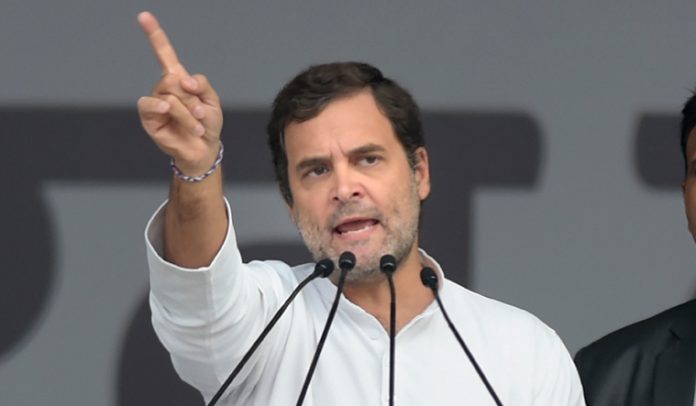 Congress leader Rahul Gandhi on Sunday attacked the BJP and its ally All India Anna Dravida Munnetra Kazhagam (AIADMK) in Tamil Nadu for insulting Tamil culture, language, history and for crippling people of the state with schemes like demonetisation and the Goods and Services Tax regime.

Hitting out at the AIADMK at a rally in Erode district on Sunday, Gandhi said that the Centre has no respect for Tamil language and culture. He alleged that Prime Minister Narendra Modi was using the Central Bureau of Investigation and Enforcement Directorate to get what he wanted. The Congress leader said PM Modi thinks just because he controls Tamil Nadu government, he can control Tamil people, but that will never happen. Erode is widely seen as a stronghold of the ruling AIADMK.

He said that the demonetisation, Goods and Services Tax, and fuel price hike have crippled the people of Tamil Nadu. The country is in the hands of five or six businessmen who think that if they control the state government, they could control the Tamil people but this is not true.

Congress leader Rahul Gandhi kickstarted the Congress’ campaign on Saturday from Coimbatore for the Assembly elections in Tamil Nadu which are scheduled to be held in May. Gandhi said Tamil Nadu needed a new government after landing in Coimbatore on Saturday. He also met industry reps in Coimbatore, a city famed for its textile industry and which boasts four special economic zones and told them the current tax system had crippled MSMEs.

Reminding Tamil voters about his family’s relationship with the state, Rahul Gandhi said history shows that Tamil people cannot be cheated. Gandhi’s father, former Prime Minister Rajiv Gandhi, was assassinated at Sriperumbudur near Chennai in May 1991. He also said he knows about his grandmother and father’s respect in heart of the Tamil voters.

Tamil Nadu Assembly polls will be the first state elections since two of Tamil’s most influential political leaders- the AIADMK’s J. Jayalalithaa and the DMK’s M.K. Karunanidhi passed away, leaving a massive power vacuum that many are racing to fill. Congress is also trying hard to fulfill the political vacuum.

In the 2019 Lok Sabha polls, the alliance of DMK and Congress won 38 of 39 seats but the Congress missed the bus in the 2016 state election, winning just eight of the 41 seats it contested. As a result despite DMK’s good performance, the AIADMK returned to power. In Bihar, Congress failed to perform well bagging only 19 seats which dragged down the tally of Tejashwi Yadav led Mahagathbandhan of Congress, Janata Dal-United and Left parties.