Rahul Gandhi said agriculture is the only business that belongs to Bharat Mata and urged the people to force the government to withdraw farm laws. 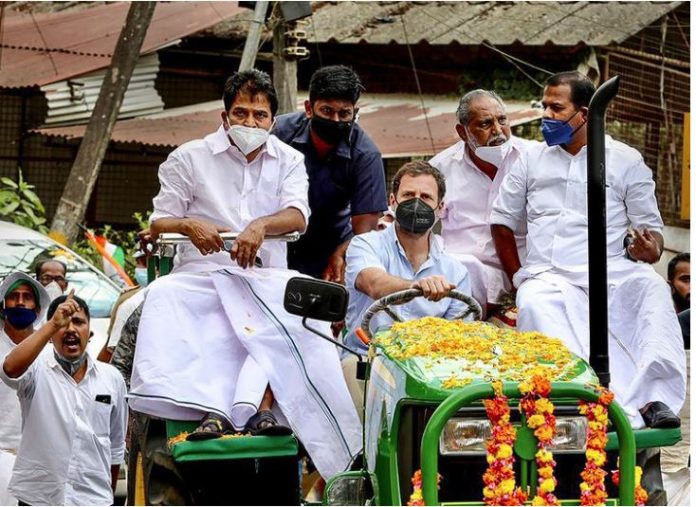 In solidarity with agitating farmers, the Congress leader Rahul Gandhi on Monday organised a tractor rally of around 200 tractors in his constituency. Hitting out at the BJP-led NDA government, Gandhi said agriculture is the only business that belongs to Bharat Mata and urged the people to force the government to withdraw farm laws.

The Wayanad MP is on his two-day visit in Kerala ahead of upcoming assembly elections in the state. The ruling Left government led by Chief Minister Pinarayi Vijayan and the Congress-led opposition United Democratic Front have strongly opposed the centre’s new farm laws in Kerala.

After the six-km long tractor rally from Thrikkaipatta to Muttil, Gandhi said that the entire world can see the difficulties faced by Indian farmers but the government in Delhi is unable to understand the pain of the farmers. Referring to his Hum do, Hamare do remarks at the Parliament, he said that the governments idea is very simple that these four people must control the Indian agriculture. Their idea is that farmers must sell their produce directly to these businesses. He also alleged that the farm laws are designed to destroy the agriculture system in India and give the entire business to 2-3 friends of Prime Minister Narendra Modi.

Gandhi also alleged PM Modi had ridiculed the rural job scheme when he took over as PM in 2014 but was later forced to accept the fact that the programme brought in by the previous UPA government played the role of saviour during the Covid-19 pandemic. He noted that the demand for MGNREGA, which provides social protection for the most vulnerable people living in rural India by guaranteeing wage employment opportunities, “skyrocketed” during COVID.

Earlier, inaugurating a Kudumbasree Sangamam at Poothadi Grama Panchayat, Gandhi said the Congress works for the empowerment of the poor and alleged that the idea of the ruling BJP was to empower the most powerful.

Listing out the benefits of MGNREGA, Gandhi claimed that the implementation of MGNREGA scheme was the major reason for the tremendous economic growth during the UPA regime. Gandhi alleged that many people had claimed MGNREGA scheme was going to ruin the people but the same people are not saying anything while the government is giving lakhs of crores of rupees to the big business and privatising huge public sector companies.