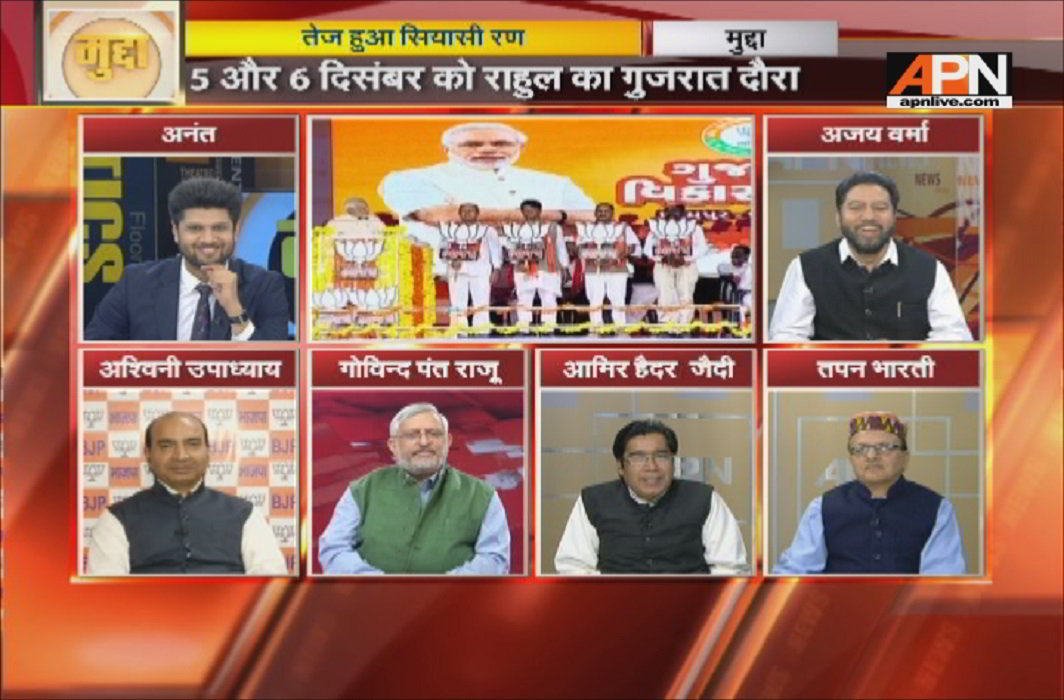 Mudda panellists feel Gujarat polls will be a litmus test for him even as some wrangle over his faith. The leader filed his papers for the party president today

Rahul Gandhi has filed the nomination for the post of Congress president, paving the way for his much-awaited elevation. This sets the stage for a contest between Rahul Gandhi on one side and Prime Minister Narendra Modi on the other, ahead of the 2019 Lok Sabha elections. Addressing a rally in Gujarat, Modi termed the elevation as “Aurangzeb raj”. Rahul Gandhi’s elevation and the Gujarat elections have hogged media spotlight. The issue was discussed at APN’s popular debate Mudda. Anchorperson Anand discussed the issue with Ajay Verma of the Congress, Amir Haider Zaidi of the CPI, Tapan Bharti, economist, Ashwani Upadhyay of the BJP, and Govind Pant Raju, consultant, APN.

Verma said that it was high time that Rahul Gandhi had got elevated, as he had worked hard all these years, and seen the party through various centre and state level polls. He said security of women, development and youth issues will be the prime focus of the Congress now.

Upadhyay said that the Congress is ridden with problems of corruption and casetism. Many scams can be traced back to the Congress, also it’s a dynastic party which is why Rahul Gandhi’s elevation will not make much difference. He pointed that while the BJP has had different presidents from different political families over the years, Congress leadership has always had presidents from the Nehru-Gandhi family.

To this Ajay Verma immediately reacted and said that BJP leader Bangaru Laxman was also caught in the coprruption net.

Upadhyay interjected to say that Zaidi has been behaving like the Congress spokesperson.

Zaidi said that many other parties are also dynastic. He gave the example of Mulayam Singh and Akhilesh Yadav, and Mehbooba Mufti in Kashmir.

Verma said that the Congress had left the field open for other leaders to stake claim for presidentship, but there seems to be no other leader of a bigger stature than Rahul Gandhi who can lead the party into the new era.

Tapan Bharti said that the Gujarat polls will be like a litmus test for the Congress, Rahul Gandhi is a fifth generation leader, the timing of his elevation is significant because polls are also expected in the near future, in Rajasthan and Karnataka, after Gujarat. He pointed out that the BJP has bigger cadre base and more funds than the Congress, so it shall be a challenge for Rahul Gandhi to show his mark.

Raju said there can’t be too much change with Rahul Gandhi taking over. He pointed out that Sonia Gandhi had made it clear that she shall not be leading the party once she crosses 70 years; she is now 71 and time for the Congress to elect a new president. He added that Rahul Gandhi should be able to inspire confidence among the youth.

Verma said that the Congress core team is in place in Gujarat even as the BJP has driven the entire cabinet as well as roped in various chief ministers for the Gujarat polls.

Upadhyay said that the BJP has a huge cadre base, and 16 CMs, over 300 legislature members, and so on. Since elections are like a festival in India, what’s wrong if BJP senior leaders are seen in Gujarat for the polls?

The debate then steered to how the Congress has been trying to change its image to show that the party is pro-Hindutva.  Upadhyay remarked that Rahul Gandhi is Parsi from father’s side and Christian from mother’s, so why has he started visiting temples of late.

The latter part of the debate was a verbal wrangle between Ajay Verma and Ashwani Upadhyay.