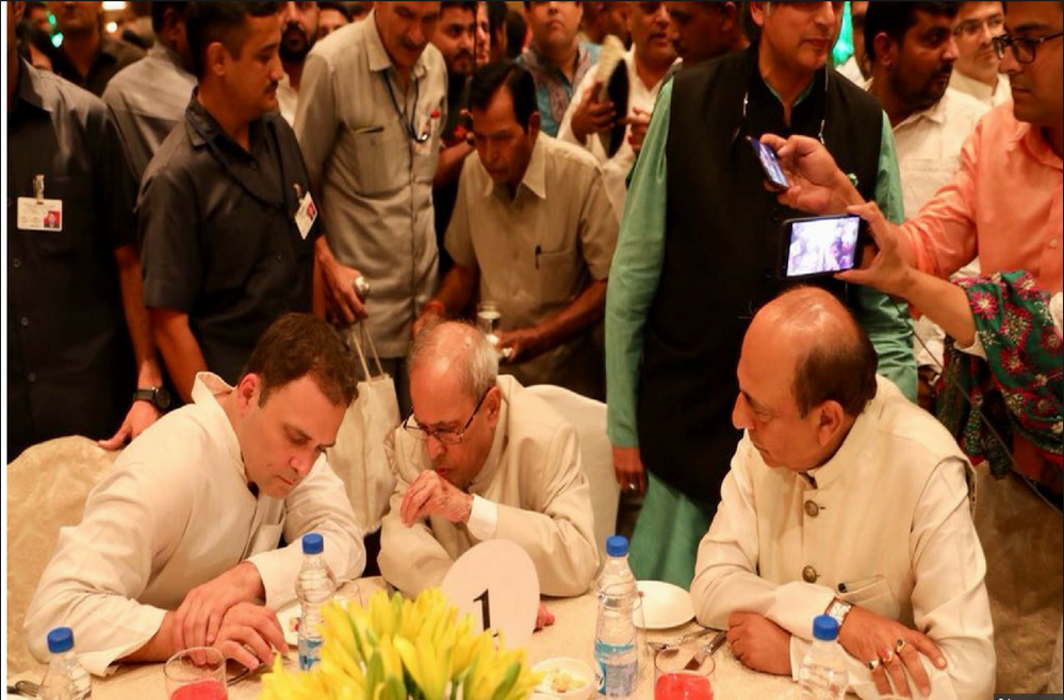 Rahul Gandhis first iftar party after becoming Congress president, also the first by a Congress chief since 2015 when Sonia Gandhi hosted it, was a keenly watched event.

There were two main reasons. One was the presence of former President Pranab Mukherjee whose going to RSS function in Nagpur had upset many Congress leaders. The other was the attendance of opposition party leaders in the context of the moves for cobbling up a united anti-BJP front.

Former President Pranab Mukherjee cornered most of the attention, with much speculation about his attendance due to hyper-active imagination by some about his supposed proximity to RSS-BJP after the Nagpur event. The Congress’ official statement said Mukherjee, with his address, reminded the BJP and its ideological mentor about “India’s pluralism, tolerance, secularism and inclusiveness” but a section still questioned Mukherjee’s decision.

However, Mukherjee came, walking in with folded hands, chaperoned by Rahul and they settled on a table, shared by former President Pratibha Patil, Yechury and TMC’s Dinesh Trivedi. The easy, friendly chat between Mukherjee and Gandhi could ease the flutter in many Congress hearts, as TOI reported.

A guest gifted a skull cap to the Congress president. Rahul wore it, was photographed and removed it after moments. While iftar, though a Congress institution, presented a contrast with Rahul’s recent temple run, he has always said he visits temples, mosques, gurudwaras and church, wherever he is invited.

Jharkhand Mukti Morcha’s Hemant Soren, Janata Dal (Secular) leader Danish Ali, All India United Democratic Front chief Badruddin Ajmal and a lawmaker from the Indian Union Muslim League were among the others who attended the iftar along with several top diplomats.

It also saw large-scale participation by representatives of the Muslim community.

The Samajwadi Party was conspicuous by absence despite an invitation to its chief Akhilesh Yadav and senior party leader Ramgopal Yadav. National Conference too was not seen.

Also conspicuous by its absence was the Aam Aadmi Party, with which the Congress is at loggerheads in Delhi. The big opposition get together is the first since Janata Dal Secular chief HD Kumaraswamy’s oath in Bengaluru earlier this month. AAP chief Arvind Kejriwal had attended that meeting.

Missing at the iftar was Sonia Gandhi, who is still abroad for medical check-up and is likely to return on Saturday.

Among diplomats, except Pakistan High Commissioner, almost all diplomats of Muslim countries were present. Talking about not inviting any Pakistani diplomat, a Congress leader said a picture of Rahul Gandhi shaking hands with Pak High Commissioner at this moment would not have been politically correct and media would have focused entirely on it.

This was the second such gathering of the Opposition forces after United Progressive Alliance chairperson Sonia Gandhi’s dinner in March this year. According to observers, Gandhi referred to Prime Minister Narendra Modi’s new fitness video posted on Twitter and asked if others had seen it. He then quipped: “I found it bizarre. It’s bizarre.”

He then asked Yechury to put out his fitness video to match Modi’s. And Rahul, admittedly way younger than PM Modi, is himself a fitness enthusiast with training in martial arts as well.

With politicians at the iftar party, it was a political get together marked by political talk. Yechury reportedly told BSP’s SC Mishra how the Left parties were protesting against cases of atrocities against Dalits and Muslims. He also told him that the BSP, Samajwadi Party and Congress must have a state-level pact for the 2019 polls. Mishra and Yechury maintained that a pre-poll nationwide alliance was not feasible.

“The larger message is that almost all Opposition parties came for the iftar and interacted with each other. This unity is our message to the Dalits and the minorities,” said a senior Opposition leader who sat at the same table with Gandhi.

A Muslim leader of the Opposition said: “At a time when the BJP has abandoned the culture and practice of iftar in Delhi, this is a good signal to the community.”

Rahul later tweeted, “Good food, friendly faces and great conversation make for a memorable Iftar! We were honoured to have two former Presidents, Pranab Da & Smt Pratibha Patil ji join us, along with leaders from different political parties, the media, diplomats and many old & new friends.”

Good food, friendly faces and great conversation make for a memorable Iftar! We were honoured to have two former Presidents, Pranab Da & Smt Pratibha Patil ji join us, along with leaders from different political parties, the media, diplomats and many old & new friends. pic.twitter.com/TM0AfORXQa

The BJP took jibes at the Congress for hosting the iftar. “We talk about development and dignity… The Congress’s iftar is for political engineering. No one has ever tried to organise an iftar for social engineering. We have done it, especially when we are talking about Muslim women, triple talaq and other issues related to their empowerment,” minority affairs minister Mukhtar Abbas Naqvi said, comparing his iftar with the one held by the Congress.

Congress leaders said that the success of Gandhi’s iftar should not be measured top leaders staying away, after all the whole Iftar was planned at short notice, less than a week. “Karnataka CM Kumarswamy could not make it, as he is holding one in Bengaluru,” said JD(U) leader Danish Ali, according to a report in DNA.

The iftar almost didn’t happen, according to the DNA report. It was the Congress veterans, who reportedly convinced Gandhi for holding the Iftar Party, said the report.

The event was significant not just because it was projected as an outreach to the Muslim community by the party but also because it was the first such formal opposition meet being hosted by Gandhi.