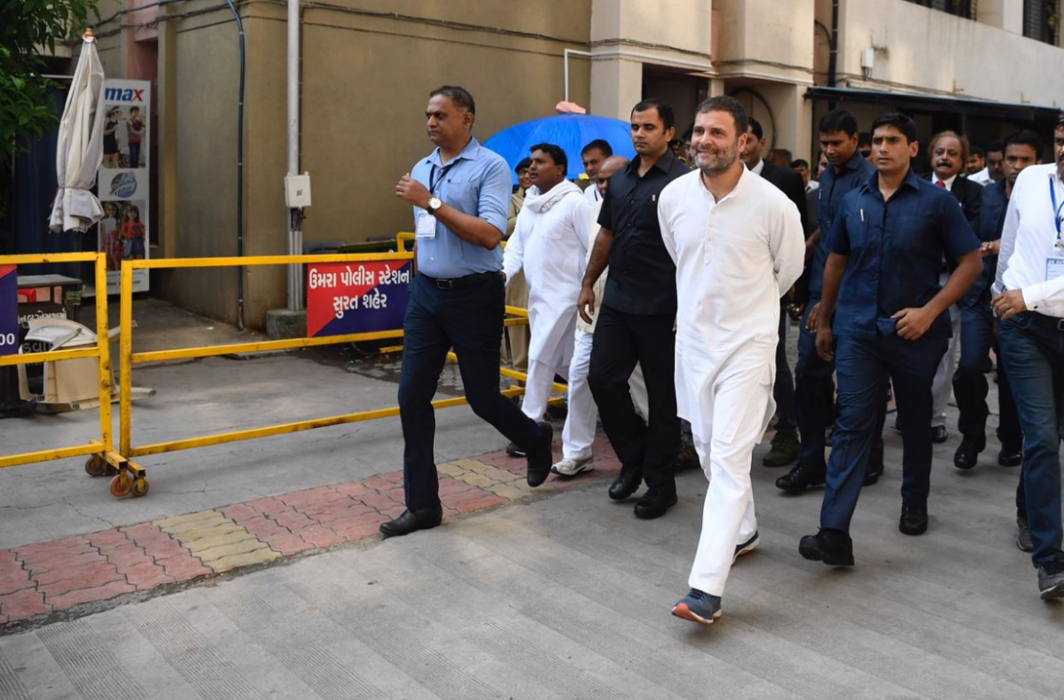 Congress leader and Lok Sabha MP Rahul Gandhi today – Thursday, Oct 10 – said the string of defamation cases filed against him were filed by political rivals desperate to silence him.

Rahul was in Surat today to appear before a magisterial court in a criminal defamation case filed against him in different towns for his remark “how come all thieves share the Modi surname”.

“I am in Surat today to appear in a defamation case filed against me by my political opponents, desperate to silence me. I am grateful for the love & support of the Congress workers who have gathered here to express their solidarity with me,” he tweeted.

Rahul Gandhi faces several defamation cases. Tomorrow, after the one he appeared for today, there is another case coming up in an Ahmedabad court in connection with a defamation case over his statement that the Ahmedabad District Cooperative Bank, in which Shah is director, was involved in a scam during demonetisation. This related to the reports that scrapped currency notes with face value of Rs 750 crore were exchanged with valid bills within five days of demonetisation in 2016.

Also slated for tomorrow is the case against him for calling Union Home Minister Amit Shah a “murder accused”. The former Congress President, on April 23, had attacked Amit Shah citing a murder case in which the BJP leader was discharged some years ago, after BJP came to power.

Besides, there is a defamation case against him for his alleged comments linking Gauri Lankesh’s killing with the BJP-RSS ideology and another for allegedly blaming the Sangh for Mahatma Gandhi’s assassination.

Appearing in the court of Chief Judicial Magistrate BH Kapadia today, Rahul pleaded not guilty when asked by the court whether he accept the charges levelled against him by BJP legislator from Surat-West, Purnesh Modi.

After Gandhi’s plea was recorded, his lawyers moved an application seeking a permanent exemption from personal appearance in the next hearings. After Modi’s lawyers raised objection to the exemption plea, the court said it will decide on the plea on December 10.

The court said Gandhi is not required to remain present during the next hearing on that date.

During the last hearing in July, the court had granted Gandhi exemption from personal appearance for that hearing and fixed October 10 as the next date of hearing.

In his complaint, the BJP legislator had alleged the Congress leader had defamed the entire Modi community with his remarks, made during the Lok Sabha campaign this year. The court, while admitting the suit, had held that there was a prima facie case of criminal defamation against the Lok Sabha member from Wayanad.

In his complaint, Purnesh Modi had said the Congress leader had defamed the entire Modi community with his statement.

The Congress claims his remarks had been directed at allegations of corruption against businessmen Lalit Modi and Nirav Modi and were meant to highlight the failure of Prime Minister Narendra Modi to bring them to justice.

“In a democracy, party in power should tolerate criticism of opposition. Rahulji had said Lalit Modi and Nirav Modi are thieves and Narendra Modi is a failure. BJP connected his statement to Modi community and insulted them,” Shaktisinh Gohil, a Bihar Congress leader, was quoted by ANI.

“Such transparent attempts to silence the truth will never work, the fight against lies & hatred will always be strengthened by sincerity & love,” the party tweeted.