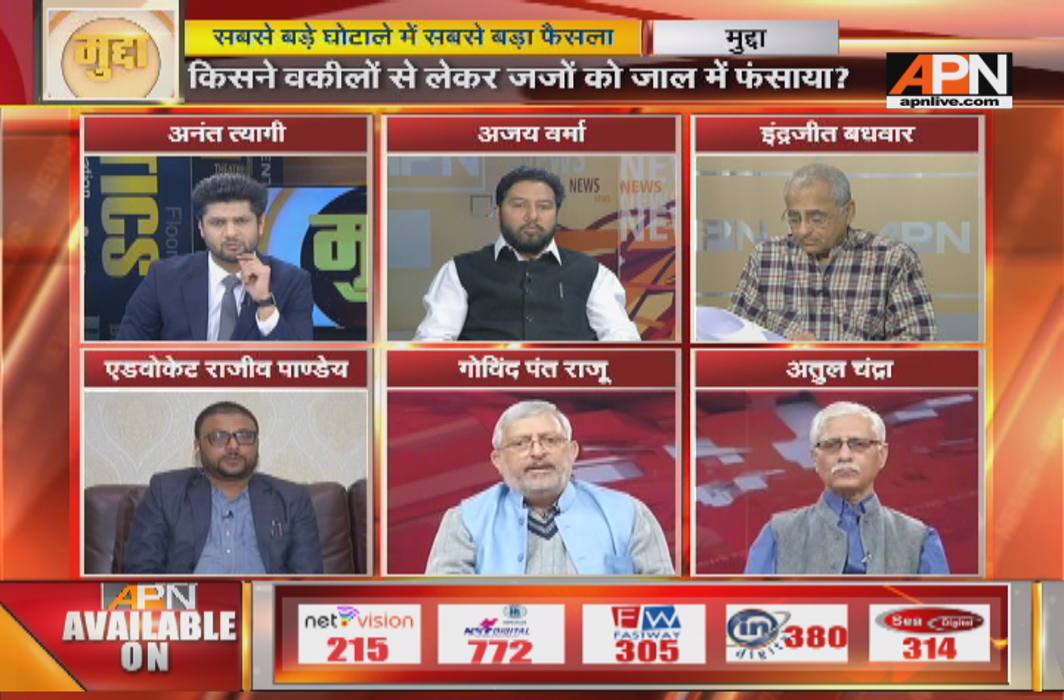 Mudda panellists discuss 2G acquittal, remember how he had told India Legal magazine that the case against him was one of vengeance and he was proud of how he had handled his duties as telecom minister

Former telecom minister A Raja and DMK leader Kanimozhi were given a clean chit along with 15 others in the 2G scam by a special court.  The scam had rocked the telecom industry in 2009 and was instrumental in the defeat of the Congress in the 2014 elections.

Inderjit Badhwar said: “After coming out of jail in 2015, in the first interview given to APN, Raja said that the CBI had not filed an FIR based on CAG reports. The actual loss, according to one estimate, was about Rs 22,000 crore. But media reports stated it to be Rs 1,76,000 crore. CAG had given its report to parliament, which calculated the presumptive exchequer loss to the tune of Rs.1.76 lakh crore on the basis of 3G auction price. Also, the CBI court had dismissed the disproportionate assets case and other bribery charges against Raja. In the interview to APN and India Legal, he had proudly said that ‘I am the spectrum Raja’. He even mentioned that his decision to break the monopoly of spectrum allocation and bring in auctions had irked some people. Sunil Bharti Mittal had tried to influence his decision and reverse it, said Raja. He said the case against him was a case of vengeance.”

Govind Pant Raju remarked that since the investigation agencies could not prove the charges against Raja, it raises suspicion about the agencies. He said: “The investigating agencies seem to be incompetent. The scam had rocked the political history of India. In 2007, the finance ministry said that the agencies were not investigating the matter properly. So, it doesn’t make sense for Vinod Rai to apologise now as the inefficiencies of CAG was reported much before he became the auditor general.

Pradeep Rai said after today’s judgment, CBI will lose the people’s trust. He said: “The government will appeal against it. They have to appeal as today they lost their biggest weapon against the Congress.”

Ajay Verma, on the other hand, accused the RSS and BJP of fabricating scams like the 2G against the Congress to win elections.

Rajeev Pandey drew a comparison of the case with the Aarushi Talwar murder case. He said: “There are numerous cases like this where the CBI has not been able to prove anything. Say, for instance, the Aarushi Talwar case. The CBI has not been able to prove anything. But that doesn’t mean she was not murdered. If we remember the Supreme Court had said previously that it was an ‘organised loot’. The court had quashed 122 licences. This matter is now in the CBI special court. It will go to the high court and then the Supreme Court. Only then will it be proved if anyone is guilty or not. The Congress had misused the power of the CBI in 2011. The CBI will now examine the order and take a decision.”

Atul Chandra also said today’s judgment raises questions about the CBI’s loyalties. He said: “The CBI had previously been called a ‘caged parrot’. Yes, today’s judgment has brought new hopes for DMK and Congress. They are excited.”

Shantanu Sen said as the case went on for six long years, a prima facie case must have been there. He added that to understand the reasons of the failure of the CBI to prove anything one has to read the judgment. “Our criminal law says one has to prove a case ‘beyond the shadow of doubt’,” he said.