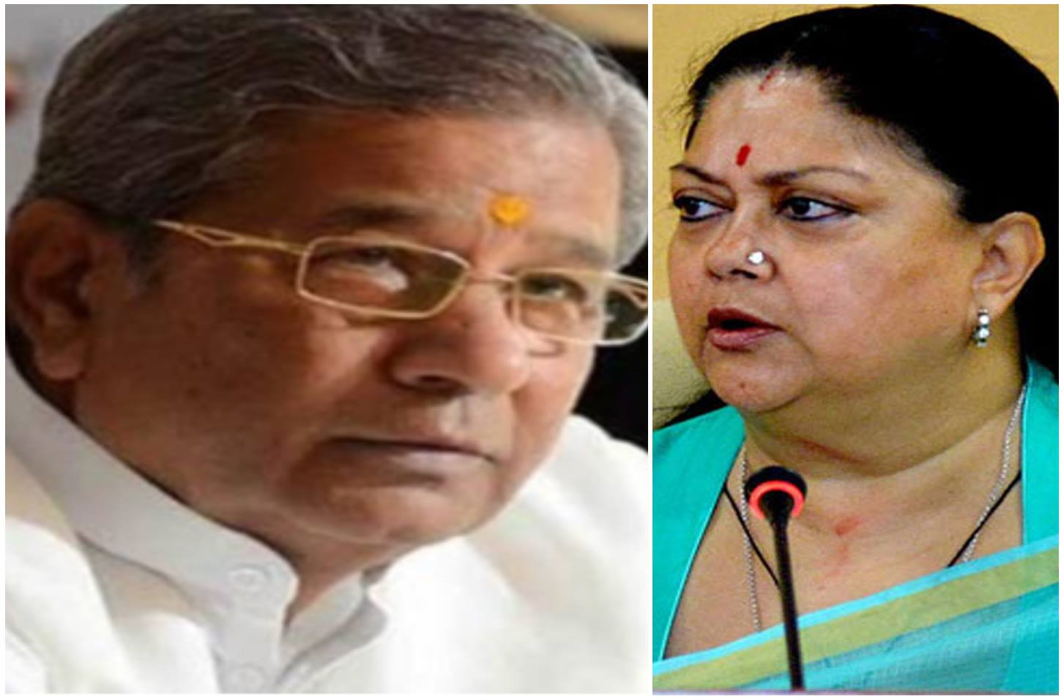 Six-term MLA Ghanshyam Tiwari of Rajasthan BJP has quit the party alleging rampant corruption under chief minister Vasundhara Raje and an undeclared Emergency in the country and in Rajasthan.

The allegations for the move hurt BJP where it hurts most, coming at a time when the BJP top brass chose to pull out the issue of Emergency without any apparent reason or occasion – this is the 43rd year, not 10, 25, or even 40 years – to observe it as a ‘Black Day’ and attack the Congress.

A former minister, Tiwari said that he has submitted his resignation to party chief Amit Shah and accused him of not reining in corruption by CM Raje.

Tiwari’s move was anticipated. A rebel MLA sidelined for four years, he had announced two days earlier that he will field candidates on all 200 Assembly seats of the state under the banner of Bharat Vahini Party, whose founder president is his son Akhilesh Tiwari, said media reports. BVP was registered by the Election Commission of India on June 13.

Tiwari talked about Emergency days, recalling that he “went to jail, was beaten up, and operated while underground.” But, he said “the undeclared Emergency at present in the nation and state is more dangerous than declared Emergency.” He said he was immensely hurt at having to leave the party after being associated with the Sangh for decades.  Tiwari has been with the party since its Jansangh days.

In his four-page resignation letter, he alleged that both the state and central leadership have kneeled down before Chief Minister Vasundhara Raje.

While addressing Shah, the senior leader pointed out that his repeated complaints over the last four years on corruption and misrule in Rajasthan did not find an audience.

“I even attempted to tell that an individual has taken control of BJP in the state. But you did nothing. Instead, you tried to harass and defame the loyal workers of the party. It is now clear that first you agreed to side with corruption in Rajasthan and now, you have kneeled before it,” Tiwari wrote to Shah.

In his letter to BJP President Amit Shah, Tiwari wrote, “The present state government, in connivance with some leaders in Centre, has been looting the state. Under the leadership of the chief of the state government, a coterie of some ministers and officers has only one aim: to pick the pockets of the citizens and rob the state’s resources.”

Without naming Raje, he wrote, “New methods of corruption are being invented on a daily basis under the chief of BJP government. Be it appointing her confederates on creamy postings, or extortion through political appointments.or possession of Rs 2,000 crore government residence in Civil Lines – for life – through a Bill.”

Further, he wrote, “…the power and dignity of all the major constitutional offices – Vidhan Sabha, Vidhan Sabha committees, Raj Bhawan, Rajasthan Public Services Commission, council of ministers etc. – have been put at stake for fulfilling personal aspirations. False cases are filed on dissenters and their families harassed. Situation is such that newspapers are openly suppressed economically and politically.”

Tiwari is the MLA from Jaipur’s Sanganer Assembly seat — his sixth term in the State Assembly. In 2013 Assembly elections, he had won with the highest margin in the state, defeating Congress rival by over 65,000 votes.

Tiwari is a known adversary of Rajasthan Chief Minister Vasundhara Raje in the state’s political circles. He had been at loggerheads with her on several occasions during her current stint as the state Chief Minister and in 2017, the BJP’s national disciplinary committee issued show-cause notices to Tiwari after he alleged that the state party unit had become a place for mafias and sycophants, PTI reported.

Tiwari said he will contest from the same constituency – Sanganer – in the upcoming Assembly elections in Rajasthan from his son’s newly-floated party Bharat Vahini Party. The polls are scheduled for later this year.

While Tiwari’s party is unlikely to win on his own but he can harm the BJPs prospects in the assembly election. He could influence some Brahmin votes, a caste that constitutes 12.5 per cent of the population.

The Vasundhara Raje government is already facing anti-incumbency and the BJP has faced series of defeats in recent bypolls. In the bypolls to five assembly and two Lok Sabha seats so far, the BJP lost three and two respectively to the Congress.

In bypolls for two Lok Sabha seats held earlier this year, the BJP lost in all the 17 assembly constituencies.

The party’s state unit is plagued with infighting and dissensions and the central leadership has failed to appoint a state president, a post which has been lying vacant for a considerable period of time.

Officially, the BJP put up a brave face. Party’s Rajasthan in-charge, Avinash Rai Khanna, was quoted by media reports as saying that “no person has been able to establish himself politically after parting ways with the BJP. His case was pending before the disciplinary committee and he took this step on his own.”