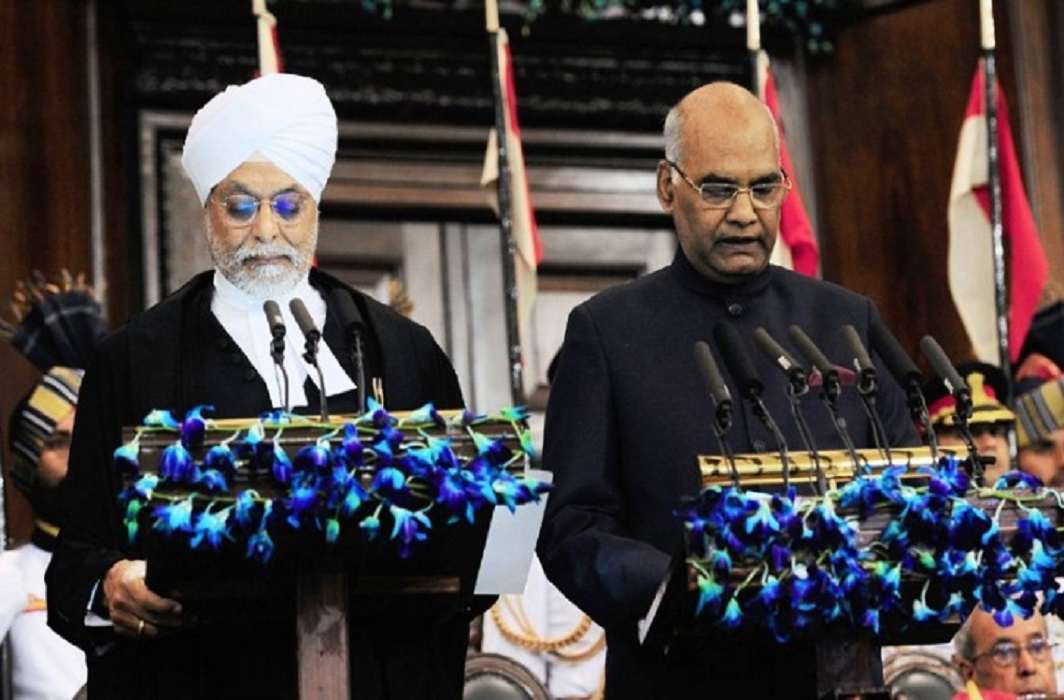 Second Dalit to occupy President’s office since KR Narayanan; talks about an ‘India of Opportunities’ in his maiden address to Parliament

From virtual political anonymity till a few months ago, Ram Nath Kovind was sworn in as the 14th President of India in a traditional ceremony organized inside the Central Hall of Parliament on Tuesday.

In his maiden address to a joint sitting of both Houses of Parliament, Kovind drew inspiration in large measure from the late Jan Sangh president and RSS icon Deen Dayal Upadhyay’s doctrine of Antyodaya, as he talked at length about “an India that will provide equality of opportunities”.

Kovind, who once was an active albeit low-profile member of the RSS – having led its Dalit-cell – and was the Governor of Bihar until the BJP decided to make him its nominee in the recently concluded Presidential polls, also made a strong pitch for synchronizing the traditional India with aspirations and needs of the India of 21st century.

He talked about his government’s (as he is now not a member of the BJP but Constitutional head of India – and the Union government) efforts towards a Digital India. “The India of the 21st century will be one that is in conformity with our ancient values as well as compliant with the Fourth Industrial Revolution. There is no dichotomy there, no question of choice. We must combine tradition and technology, the wisdom of an age-old Bharat and the science of a contemporary India. As the gram panchayat must determine our consultative and community based problem solving, the Digital Republic must help us leapfrog developmental milestones. These are the twin pillars of our national endeavour,” Kovind said in his inaugural address after being sworn-in.

Breaking from the tradition followed by most newly sworn-in Presidents, Kovind kept references to individual freedom fighters to a minimum. While completely blacking out any reference to India’s first Prime Minister, Pandit Jawaharlal Nehru, Kovind made fleeting references to Mahatma Gandhi, stating that “Our Independence was the result of efforts by thousands of patriotic freedom fighters” led by him and hailed Sardar Patel, who “integrated our nation”. He spoke of BR Ambedkar as, predictably, the “principal architect of our Constitution”.

But, at a time when the country is facing a polarizing debate over its citizen’s choice of following a religion, Kovind made at best a tangential mention of India’s secular ethos when he made a brief comment on India’s diversity: “India’s success is its diversity. Our diversity is the core that makes us so unique. In this land we find a mix of states and regions, religions, languages, cultures, lifestyles and much more. We are so different and yet so similar and united,” Kovind said.

Drawing inspiration from the Antyodaya doctrine, Kovind asserted that “Nations are not built by governments alone. The government can at best be a facilitator, and a trigger for society’s innate entrepreneurial and creative instincts. Nation building requires national pride”. He then went on to hail individual sections of the country’s citizenry – women, soldiers, farmers, weavers, scientists and even start-up entrepreneurs as “nation builders”.

However, as soon as Ram Nath Kovind’s swearing-in ceremony ended, the Central Hall of Parliament also witnessed loud chants of ‘Jai Shri Ram’ and ‘Bharat Mata Ki Jai’ – something that is unprecedented at a President’s oath-taking ceremony and expectedly caused discomfiture to some members of the Opposition and other guests present at the ceremony.

Through the day, greetings from various sections of the society – the power elite and common citizens alike – poured in for Kovind on various social media platforms.

Congratulations to Shri Ram Nath Kovind ji on taking oath as the President of India. @RashtrapatiBhvn

Heartiest congratulations to Hon'ble Sh #RamNathKovind ji on assuming the office of President of India. Best wishes for a successful tenure. pic.twitter.com/ZbeL4WLXYU