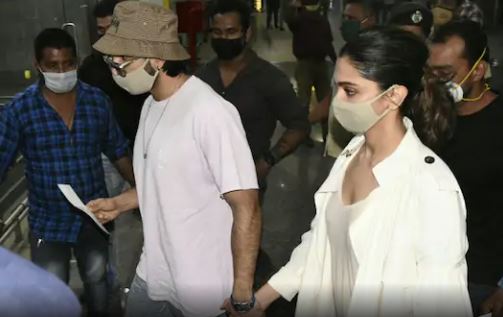 Bollywood actor Ranveer Singh, the husband of actor Deepika Padukone, has appealed to the Narcotics Control Bureau (NCB) to permit him to be present during his wife’s interrogation on Saturday.

Reports said Ranveer Singh has said in his application to the NCB that Deepika Padukone suffers from anxiety issues and gets panic attacks. He has therefore asked NCB permission to accompany her during her interrogation on in the drug case related to the death of actor Sushant Singh Rajput.

Ranveer Singh also stated that he is a law-abiding citizen and said he’s also aware of the fact that he is not allowed to be present at the time of Deepika Padukone’s questioning. The NCB is yet to decide on Ranveer Singh’s application yet.

Meanwhile, Padukone, who was shooting for a film in Goa arrived in Mumbai on Thursday. Apart from Deepika Padukone, the NCB will be interrogating actors Sara Ali Khan and Shraddha Kapoor in drug-related cases. The NCB officials on Friday recorded statements of fashion designer Simone Khambatta and Shruti Modi, a former manager of Sushant Singh Rajput.

The NCB had launched an investigation after it received official communication from the Enforcement Directorate (ED) alleging the operation of a drug mafia in the Bollywood. The NCB had launched a probe after recovering various WhatsApp chats related to drug consumption, procurement, usage, and transportation.

Meanwhile, according to reports, six top male Bollywood actors have called their lawyers out of fear of after-action being taken against them over NCB’s massive crackdown on the drug nexus in Bollywood.