From Amitabh Bachchan to Taapsee Pannu, the celebrities shared their warm wishes on their social media handles on the occasion of 72nd Republic Day. 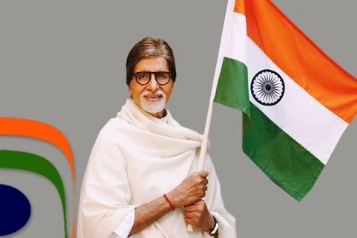 As India celebrated its 72nd Republic Day today, a slew of Bollywood celebrities extended their wishes to fans on the occasion. On this very day, the Constitution of India came into the force.

From Amitabh Bachchan to Taapsee Pannu, the celebrities shared their warm wishes on their social media handles. Wishing peace and prosperity, Amitabh Bachchan urged fans to be safe and protected on Republic Day.

Wishing a happy Republic Day to everyone, Taapsee hoped that citizens of India read and understand the Constitution of the country as much as they celebrate it.It will help everyone to be more patriotic than what they actually are, said the actor in her tweet.

On the occasion, global icon Priyanka Chopra drew attention to the role of women leaders in the formation of Indian constitution, She posted a video, highlighting the names of those women who have helped draft the Constitution of India, including Sucheta Kripalani, Vijay Lakshmi Pandit among others. There were 15 women in the first Constituent Assembly of India who helped build the fundamental principles of India, wrote Chopra in her Instagram post.

The couple Virat Kohli and Anushka Sharma also sent out wishes to fans on Instagram stories. The cricketer wrote, the future depends on what we do today. Let’s be the strength of our nation and help it reach greater heights, said Virat in his post. While Anushka shared Tricolour on her Instagram story and wished everyone happy Republic Day.

John Abraham took this opportunity to share a still from his upcoming film titled Satyamev Jayate 2 on Instagram to announce its release date. Directed by Milap Zaveri, the film is a sequel to Satyameva Jayate (2018). He captioned the photo as,Tann Mann Dhann, se Badhkar Jann Gann Mann! The team of #SatyamevaJayate2 wishes everyone a Happy Republic Day! See you in cinemas this EID on 14th May 2021.

Sidharth Malhotra, who will next be seen in the role of Captain Vikram Batra in the upcoming film titled Shershaah, wrote that may the democracy, constitution always fly higher and reach excellence. He paid a salute to armed forces and leaders of the country while wishing fans on the Republic Day.

Several other celebrities like Sonu Sood, Suniel Shetty, Manoj Bajpayee, Riteish Deshmukh, Madhuri Dixit among others extended wishes to their fans on the occasion. Here are the wishes: